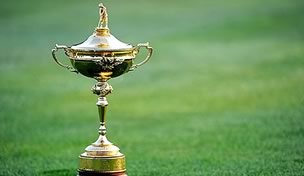 The best part about France landing the 2018 Ryder Cup is a potential Jean Van de Velde captaincy and ... well, at least it’s not Celtic Manor. Other than that, news that the biennial slugfest is bound for Le Golf National is another sign that cash, not the competition, is king when it comes to the European selection process.

Tiger Woods. Make no mistake, Woods’ Tweet-nouncement “Bummed that my left leg has me on the sidelines, but I want, and expect, to be at the U.S. Open. Will do all I can to get there,” is not exactly the clean bill of health everyone wants, but it is progress, if not for the patient then at least the process.

Golf is at its best when Woods is, but a front-nine 42 and another trip to the trainer’s table doesn’t do anyone any good, especially Woods. He seems likely to miss the Memorial, which he has won four times, but now, more than anything, he needs rest, not reps.

Special delivery. News that FedEx re-upped to sponsor the Tour’s Memphis stop may seem like a bullet item on a slow news day, but for those who read Tour tea leaves it’s a sign of progress.

That FedEx wants to stay in the golf business, at least through 2014, may indicate the shipping giant’s interest in re-upping as the umbrella sponsor of the Tour’s season-long points race.

By comparison, commissioner Tim Finchem sounded like bachelor No. 4 when asked if he envisioned FedEx staying on as umbrella sponsor through 2013 and beyond on Sunday at TPC Sawgrass: “I would say generally yes, but I wouldn't say . . . don't hold me to that.”

Tweet of the week: @PaulAzinger “Crticizing @IanJamesPoulter for teeing off on the 18th the way he did (in fading light on Saturday at TPC Sawgrass) is unfounded. Every player on Tour would have done the same thing.”Made Cut-Did Not Finish (MDF)

Caddie carousel. First it was Bobby Brown and Dustin Johnson, now it’s Adam Scott and Tony Navarro. Unemployment hovers around 10 percent in the United States in large part to the growing number of canned caddies, or so it seems.

There is some good news. We hear Navarro may get a tryout on Johnson’s bag and Brown landed on his feet this week with up-and-coming rookie Kyle Stanley.

Reminds us of the old caddie-yard adage: there are two kinds of caddies – those who have just been fired, and those who are about to be.

No sunshine. Word that Paul Goydos was “semi-seriously” thinking about retiring is bad news on many levels.

Mr. Sunshine, as he was once dubbed for his drab demeanor, is a Tour original, funny, insightful and honest to a fault. A fixture in Tour media centers, one scribe once quipped that it’s hard to get most players into the press tent, but impossible to get Goydos out.

Let’s hope his third-place finish at The Players changes Goydos’ mind. Where else would we get lines like this gem, “Tiger Woods has never won a major (after trailing through 54 holes). Big deal, neither have I.”Missed Cut

2018 Ryder Cup. In all fairness, the PGA of America’s system isn’t that much better – what else could possibly explain repeated trips back to Valhalla and Whistling Straits – but Europe’s insistence that the Ryder Cup goes to the highest bidder isn’t doing anyone any favors.

Le Golf National may be a fine facility and maybe the Continent deserves to host the grudge match, but imagine the possibilities of a Ryder Cup played on the Old Course, or Turnberry, or any of the great links courses in the United Kingdom.

If the U.S. Open can go to Merion in 2013, the European powers that be can swallow a “discount” Ryder Cup for the good of the game.

No sunshine II. Gareth Tindall quietly announced he will step down as the commissioner of the Sunshine Tour earlier this month. Tindall, you may recall, went on record earlier this year when news of a new World Golf Championship in South Africa broke, saying, “The significance of what we've done is potential, and the U.S. tour might slag me for this, but essentially we are starting the world tour. It's been a matter of time.”

That news, however, seemed to be a tad premature. Asked in Hilton Head about the specifics of the new event, which will be called the Tournament of Hope, PGA Tour chief of operations Andy Pazder declined to comment on any specifics.

At issue is sponsorship of the $10 million event, no easy hurdle given the current economic headwinds, the date and the venue. Besides that, everything is moving along swimmingly.

TPC Sawgrass’ 17th hole. As an element of the sum of the Stadium Course’s parts, the island-greened 17th hole is an infinitely enjoyable “A ticket” ride. As the starting line for a sudden-death playoff, Pete Dye’s pool is wanting.

The “fifth major” debate aside, if the Tour wants The Players to be considered one of the game’s top events they may want to look into a three-hole playoff, like the formats used at the PGA Championship and Open Championship, that begins on the 16th hole and ends at No. 18.

Twice in recent years the winner has been decided by a gust of wind (2008) and a grainy putt (2011). That doesn’t exactly scream Grand Slam.