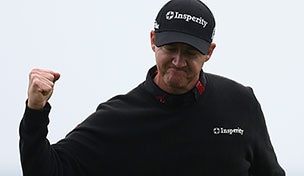 In honor of the PGA Tour’s return to Tinseltown this week, Cut Line celebrates a blockbuster breakthrough (Jimmy Walker), an ageless classic (Raymond Floyd) and a bona-fide flop (the shutting down of the men’s golf program at Furman).

L.A. story. It seems about right that Harold Varner III arrived this week at the Northern Trust Open with big dreams.

Playing on a sponsor exemption, he made it clear he has no interest in sentimental victories in just his second PGA Tour start. He is more interested in championships of the more tangible variety.

“That’s got to be the goal,” said Varner. “It sounds cliché, because that’s what everyone says, but I think I’m capable. I know I’m capable.”

On Thursday Varner stayed on script, shooting a 2-under 69 for a spot inside the top 20 after Round 1, a storybook start in a town that appreciates big dreams.

Walker, three-time Tour winner. In big-league circles it’s understood that it’s the process and not specific goals, like winning three times in eight starts, that should be followed; but then Butch Harmon has carved out a legacy not adhering to the playbook.

So it was after Jimmy Walker completed his 2013 season, his best year on Tour by any measure, that Harmon decided it was time to set the record straight.

“He was talking about finishing here on the money and there in FedEx Cup points, and I told him that’s not acceptable,” Harmon said. “Golf is about winning. I told him he’s too good to be worrying about money.”

Walker won the 2013-14 season opener at the Frys.com Open, and he has added two more victories since then (Sony Open and AT&T Pebble Beach National Pro-Am). For Walker, the process is now all about winning.

Senior division. U.S. Ryder Cup captain Tom Watson named Raymond Floyd his second assistant captain for this year’s matches, and he will join Andy North behind the wheel of a golf cart in Scotland.

Although Floyd was a competitive staple on eight Ryder Cup teams, his addition to the U.S. side does little to quiet concerns that Watson & Co. will have little in common with what is shaping up to be a particularly young U.S. squad.

Fred Couples, who is Cut Line’s pick for whatever team he wishes to captain, seemed to acknowledge the gender gap in an interview last week with The Scotsman.

“I think he’s going to think he knows most of the players, but it’s going to be hard because I don’t know how many he really, really knows,” Couples said. “But he’s got a few months to go to tournaments, and I’m sure he will have a few dinners and meet the guys, get to know them and figure out what to do.”

And if Couples’ voice doesn’t already carry enough weight, consider that Watson and his two assistants will be a combined 201 years old when the matches are played this year.

Out of time. After just 7 months together, Lee Westwood acknowledged this week his split with swing coach Sean Foley.

Although these types of divorces are nothing new, the move is particularly strange considering that no one has ever questioned Westwood’s swing, and the Englishman is regularly considered one of the game’s top ball-strikers.

“I am not working with Sean anymore,” Westwood told GolfChannel.com after his pro-am round Wednesday. “I am going to be working with somebody else.”

No word on who the former world No. 1 plans to team with (Butch Harmon confirmed to Cut Line that it will not be him), but after such an abbreviated stay with Foley it seems Westwood is looking for quicker answers, and we’re not sure what the question is.

Tweet of the week: @KipHenley (PGA Tour caddie for Brian Gay) “The 10th at Riviera will drive you nuts. (Gay) and I argued which is the best position for back right (pin). I won argument, he went my way and made bogey.”

The 10th at Riviera, #Brilliant.

Finals folly. The success or failure of last year’s newly minted qualifying system for the PGA Tour seems to be in the eye of the beholder.

“We’re going to keep the same tack. It worked out very well if you look at all the measurements we look at,” Web.com Tour president Bill Calfee told the "Morning Drive" crew on Friday. “Overall we believe the Finals were a home run. They weren’t perfect, and we’re looking at some things in terms of seeding, but I think long term the system is a good one.”

Of course if one wants to play devil’s advocate, the four-event qualifying format had its issues, most notably a concerning amount of volatility.

Consider Andrew Loupe, whose run-up to the finale at TPC Sawgrass included missed cuts at the first two Finals events (Hotel Fitness Championship and Chiquita Classic), and a WD from the Nationwide Children’s Hospital Championship.

Officials do plan to address one concern of the new system. Web.com Tour graduates were limited in the number of starts they received in the fall, and Calfee said the Tour is looking into possibly expanding field sizes at the Frys.com Open and Shriners Hospitals for Children Open to help alleviate the problem.

Fuming over Furman. Not surprisingly, news last week that Furman would be shuttering the men’s golf program drew a steady chorus of discontent.

“The shutting down of the Furman men’s golf team by the board of trustees is a disgrace,” tweeted Furman alum Brad Faxon.

The program will be nixed beginning in July. Although the decision is baffling considering the school’s rich golf history, it appears borderline negligent when one considers the program has just one senior on this year’s squad.

According to a school statement, “the decision was based on an extensive evaluation of criteria, including public visibility, attendance, competitiveness and overall costs.”

Under that criteria, wouldn’t every NCAA sport other than football and basketball be considered wanting?