Cut Line: What's up Down Under? 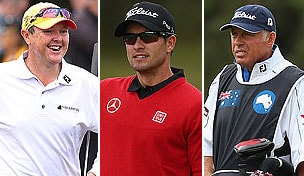 MELBOURNE, Australia – Erik Compton was awarded the PGA Tour’s inaugural Courage Award last month, but at this rate Jarrod Lyle may retire the new chalice if he continues his emotional comeback. The Australian highlights this week’s Cut Line following a frigid fortnight in Oz.

The fighter. Lyle’s plan this week at the Australian Masters was to survive the emotional storm of the first tee and make the cut. So far, he’s 2 for 2.

Following Thursday’s tearful 72 Lyle avoided a letdown on Friday that would have kept him from playing the weekend in his first event in 18 months by carding an even-par 71 to easily make the cut.

The plan was to use this week’s Australian Masters as a litmus test to guage his game and his stamina, but at this rate Lyle may be back on the Tour sooner rather than later.

It turns out, those two holes may have been the hardest part of Lyle’s week.

Geoff Ogilvy, who was paired with Lyle for the first two days, described the scene on the first tee as surreal and compared the emotion to when the Presidents Cup was played at Royal Melbourne in 2011.

“You could see he had tears in his eyes when he hit it (the first tee shot),” said Brendon de Jonge, who was also paired with Lyle. “I asked him if he thought about backing off and he said, ‘No, if I would have backed off I would have started crying more.’”

There will probably be more tears on Sunday, but it’s nothing Lyle can’t handle.

Tweet of the week: @JarrodLylePGA “T-minus 4 hours until tee off. Getting very nervous now. #crappingdacks”

Scott-land. That he won the Australian PGA Championship last week on the Gold Coast, where he grew up, and put himself right back into the hunt at the Australian Masters is impressive, but Adam Scott’s greatest accomplishment since becoming the first Australian to win the green jacket is recognizing the importance of the moment.

Scott, who rarely plays more than two or three events in a row, committed to playing all four Australian-swing events this year, including the last two weeks, next week’s World Cup at Royal Melbourne and the Open. It is a clear sign he understands the significance of his Masters victory and the impact it could have on golf in Oz.

“With (Greg) Norman, I felt he was larger than life and I don’t feel like that’s what I’m doing, but I did enjoy seeing so many kids out there (at the Australian PGA),” Scott said. “Hopefully I can help the next bunch of guys come along.”

Giants come in all sizes, gentle and otherwise.

A caddie career. Last week as Scott was making his triumphant return to Australia, his caddie Steve Williams revealed he may be ready for semi-retirement after the 2014 season.

Williams, who will turn 50 next month, said he will caddie next season for Scott and then dial back his workload in ’15, perhaps working the more high-profile events like the majors and World Golf Championships to spend more time at home with his family and racing cars.

“He was honest with me a couple of years ago and said he didn’t have long in him,” Scott said. “If I play really good next year maybe I can persuade him to go one more season.”

Although Williams has endured his share of controversy and has had a somewhat contentious relationship with the press, his looping credentials are impeccable. He’s caddied his bosses to 14 major championships – 13 with Tiger Woods and one with Scott – and has been a looping staple for more than 30 years.

There are no caddies in the World Golf Hall of Fame, but after Jim “Bones” Mackay there is no one who is more deserving of a spot in St. Augustine, Fla., than Williams.

Too little, too late. Former PGA Tour commissioner Deane Beman took to the podium this month at the U.S. Golf Association’s pace of play summit and cautioned the organization against being in “complete lockstep with the R&A on golf rules and policy issues.”

Beman went on to say that the “bifurcation of the rules for equipment needs to be more fully examined” and that “no sport has been hurt by different rules for different levels of play – including golf.”

While Beman’s take is certainly a popular one in the wake of this year’s ban on anchoring, Cut Line can’t help but wonder where he and his bully pulpit were when the anchoring debate was reaching a crescendo earlier this year.

He is, after all, a regular fourball partner of current commissioner Tim Finchem in Ponte Vedra Beach, Fla. A little small talk between shots could have gone a long way.

365 and counting. Briny Baird, who is winless in 365 career Tour starts, is long past metaphorical victories and learning experiences, and Sunday’s letdown at the McGladrey Classic will likely weigh on the veteran for some time.

But if it is true we learn more about ourselves in defeat than we do in victory his near miss at Sea Island (Ga.) Resort spoke volumes.

“This game’s so humbling it’s incredible,” said Baird, who hit his approach into a water hazard at the 72nd hole to lose to Chris Kirk by a stroke. “I could have crawled into a shell walking up to the green on 18 knowing that I had no realistic chance at winning the golf tournament  . . . you got to take away some silver linings.”

The silver lining for Baird is that PGA Tour start No. 366 was just a few days away at this week’s OHL Classic.

While we agree with Bishop that the seaside gem would be an ideal major stop for the PGA, doesn’t the United Kingdom already have a major championship?

The PGA’s potentially bold move to take its championship abroad has merit, but if Bishop & Co. are keen for a road show it seems an Asian stop would have the greatest impact.

Or, considering the affinity held for Royal Melbourne by the game’s top players and the proximity to a major market, the Sand Belt classic would also be worth a look.

If the PGA is really interested in a game changer, it’s the deep end of the pool, not the other side of the pond, that awaits.

A real split. The Tour’s new split-calendar schedule has had a domino effect on all of golf, but listening to observers this week in Australia has brought to light yet another unintended consequence.

On the heels of last week’s news that Ponte Vedra Beach, Fla., will launch PGA Tour China next season, organizers in Australia are taking a wait-and-see approach.

For years, a handful of Web.com Tour events played in Australia and New Zealand gave up-and-coming players from the region an avenue to Tour membership (see Lyle, Jarrod, 2013’s comeback kid). But those events are gone as is access to the game’s top stage via Q-School.

It’s a reality that will likely drive Australia’s best and brightest to the European Tour, which is not good for the U.S. circuit or the players.