Cut Line: WMPO party is about the big picture 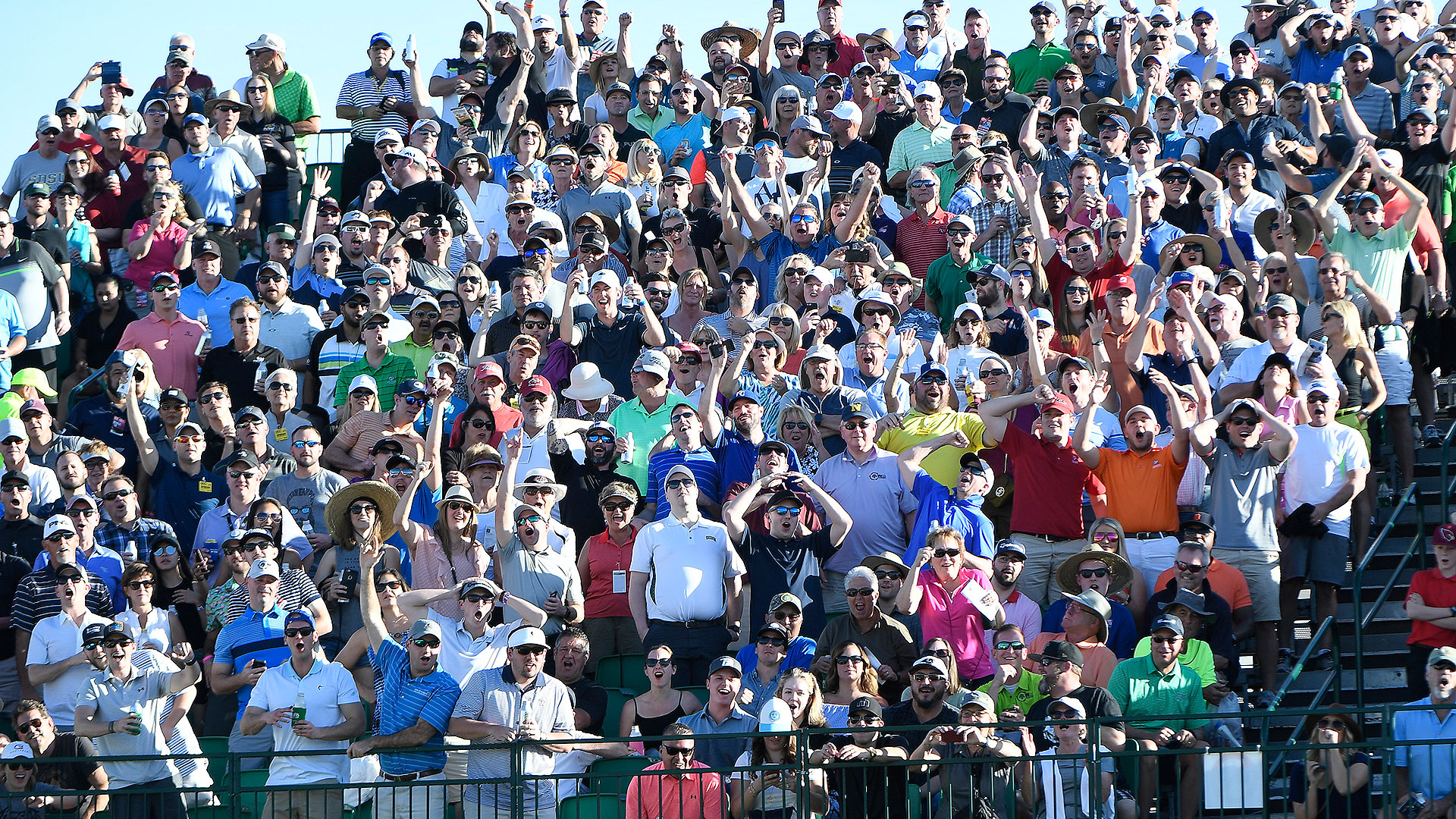 In honor of the rowdy scene surrounding the 16th hole at TPC Scottsdale, Cut Line offers a lively take on Tiger Woods’ return, slow play and the realities of trying to become a mainstream sport.

Something new. If you’re part of the segment of the golf world that has dug in against the raucousness of TPC Scottsdale’s 16th hole, you may be missing the big picture.

To be sure, No. 16 at this week’s Waste Management Phoenix Open is an acquired taste, and players are quick to point out that a steady diet of the 16th hole’s shenanigans would get old real quick, but the push back is another example of golf refusing to embrace something new.

“I may be somewhat of a fan-favorite, but they weren’t holding back,” Rickie Fowler said this week. “I was a little disappointed with some of the stuff that was said, and I don’t want much negativity. The normal boos for missing a green, that’s fine, but leave the heckling to a minimum and make it fun, support the guys out playing.”

Fowler’s point is valid - golf has always demanded a degree of decorum - but that ignores the realities in other sports and the game’s desire to broaden its appeal.

Mainstream sports, which is what golf aspires to be, are not always warm and fuzzy and can be, on occasion, downright unsavory.

Pro-(and no con) am. The PGA Tour embarked on a new experiment this week at TPC Scottsdale, giving players an option to play just nine holes of Wednesday’s pro-am.

For players, the time commitment of the pro-am can be a drain and the new policy has targeted seven events where the format will be used this season.

“There’s no other sport where you have to do a six- or seven-hour requirement the day before a competition,” Kevin Streelman told Cut Line. “LeBron [James] doesn’t have to do a seven-hour dinner the night before his basketball games.”

The new plan allows players to just go nine with the amateurs before being replaced by another professional for the closing loop; or they can play all 18 holes if they choose. It also allows amateurs, who pay handsomely to play the pro-am, to mix it up with two Tour types for the price of one.

It’s a rare win-win for the game and another sign the circuit is beginning to embrace new ideas.

The Return. Tiger Woods’ first official event on the Tour in a year wasn’t perfect. He hit just nine fairways over his last 54 holes and, if not for a vintage short game, he would not have seen the weekend at Torrey Pines.

Still, Woods’ return following fusion surgery on his lower back last April should be applauded as a positive step forward after so many steps back in recent years.

Where Woods’ tie for 23rd at last week’s Farmers Insurance Open goes off the rails is the predictable reaction from some that he’s ready to return to greatness. On this, Woods should be considered the most reasonable voice in the room.

“After not playing for a couple years and coming out here on the Tour, playing, you know, a solid four days, I fought hard for these scores,” Woods said. “They weren't like drive down the middle, hit it on the green, two putt, one of those yawners. This was a lot of fight.”

Maybe this wasn’t exactly what some fans and observers were hoping for, but based on his play at Torrey Pines Woods’ take provides a degree of more realistic expectations for the foreseeable future.

Denial. It took just a little over four minutes for J.B. Holmes to become the face of slow play on Tour. That’s the amount of time Holmes needed to play his second shot on the 72nd hole last week at Torrey Pines.

Slow play is problem, not just on Tour but throughout golf, and taking over four minutes to play a shot from the fairway, without a ruling or penalty stroke should not be the norm; but this isn’t a J.B. Holmes problem. It’s a Tour problem.

“As it relates to J.B. . . . He was in the heat of the moment,” commissioner Jay Monahan said this week. “It’s really hard to win out here. You’re trying to think through how you can get on the green in two with that amount of wind. I think he thought it would subside quickly, and it subsided and picked back up, and I think he said what he needed to say.”

It’s unfortunate the commissioner didn’t say what many want to hear. Rounds that drifted nearly six hours on Sunday at Torrey Pines are bad for the game, bad for the Tour, and until the circuit admits there’s a problem, it’s only going to get worse.

Some players, most notably Justin Thomas, came to Holmes’ defense this week, and to be fair Holmes didn’t violate the Tour’s pace of play policy. As Donald correctly points out, that’s a problem with the policy, not the player.