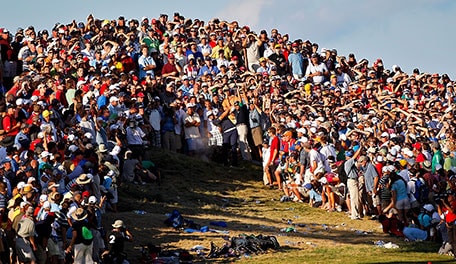 SHEBOYGAN, Wis. – Of the more than 1,000 bunkers that dot the landscape in this corner of Wisconsin farmland there will be no confusion.

The ubiquitous collections of sand and soil are now and will be for the foreseeable future hazards.

Call it the Dustin Johnson accord, but in fairness to the forlorn bomber he was hardly the only player to confuse one of Whistling Strait’s bunkers for a parking lot. He was just the one who did so at the most crucial moment during the 2010 PGA Championship.

Just as they did in 2010 and 2004, PGA of America officials have put the full press on this week to assure there is no sequel this time around, posting memos throughout the locker room that read: “All areas of the course that were designed and built as bunkers, filled with sand, will be played as bunkers (hazards).”

Each week PGA Tour players are issued similar “local rules” sheets and each week, like clockwork and taxes, they ignore them. Consider it the byproduct of being a professional who has played thousands of tournaments and, yes, even complacency.

The difference this time is players in the PGA field don’t need a reminder, gentle or otherwise, to know the road to defeat is littered with honest mistakes.

“I’ve seen a couple of messages,” Rickie Fowler said before allowing a slight grin. “Whether it’s through the locker room, social media. I’ve been told everything, all sandy areas are bunkers.”

It’s a familiarity born from a truly tragic tale, at least in the competitive sense.

Clinging to a one-stroke lead DJ pushed his tee shot into the gallery right of the 18th fairway on Sunday at the 2010 PGA, and during the tumult to clear the crowd away from his golf ball he grounded his club not once but twice.

The ensuing two-stroke penalty dropped Johnson out of the playoff, which was won by Martin Kaymer, and into major championship lore alongside the likes of Roberto De Vicenzo.

Johnson’s name became a verb, as in don’t pull a Johnson, and his plight became a cautionary tale for would-be major winners everywhere.

But the closing and confused moments of the ’10 PGA are about more than a momentary lapse in judgment or better communication.

Officials with the PGA posted similarly clear memos around the property in 2010 and that did little to change the outcome. No, the problem five years ago were the assembled masses, many of whom were sitting, eating, drinking and otherwise reveling in the “Johnson bunker.”

“The hard part was Dustin's situation, when there's that many people,” said Bubba Watson, who finished second to Kaymer in 2010 at Whistling Straits.

“With 20,000 people probably following him at that moment or on that hole at that moment where he was, you can't tell what the ground is. When they're all huddled around your ball. It's an innocent mistake ... If I was in that situation it could have happened to me the same way.”

A new infrastructure plan for this year’s championship will help alleviate some of the confusion that led to Johnson’s two-stroke penalty.

Officials repositioned many grandstands and corporate tents for this year’s championship to improve the viewing experience for fans.

“We have built more grandstands on the golf course itself as well as bringing many parts of the championship infrastructure onto the golf course with views of golf holes or Lake Michigan,” said PGA chief championships officer Kerry Haigh. “As part of these spectator improvements, we have had to build over a few of the over 1,000 bunkers.”

Included in that build out is a structure that partially covers the bunker Johnson found in 2010, but as Haigh further explained, “There still remains a lot of bunkers not covered and in play.”

Players can thank the Wisconsin masses, who have made the Midwest stop one the best-attended PGA Championships, for at least partial relief, but mostly they can thank Johnson.

For all the memos and warnings and gentle reminders, it will be Johnson’s fateful finish that likely keeps anyone else from making the same mistake.

It may not be his name etched into the Wanamaker Trophy, but at least there is some solace that Johnson has become a cautionary tale worth remembering.