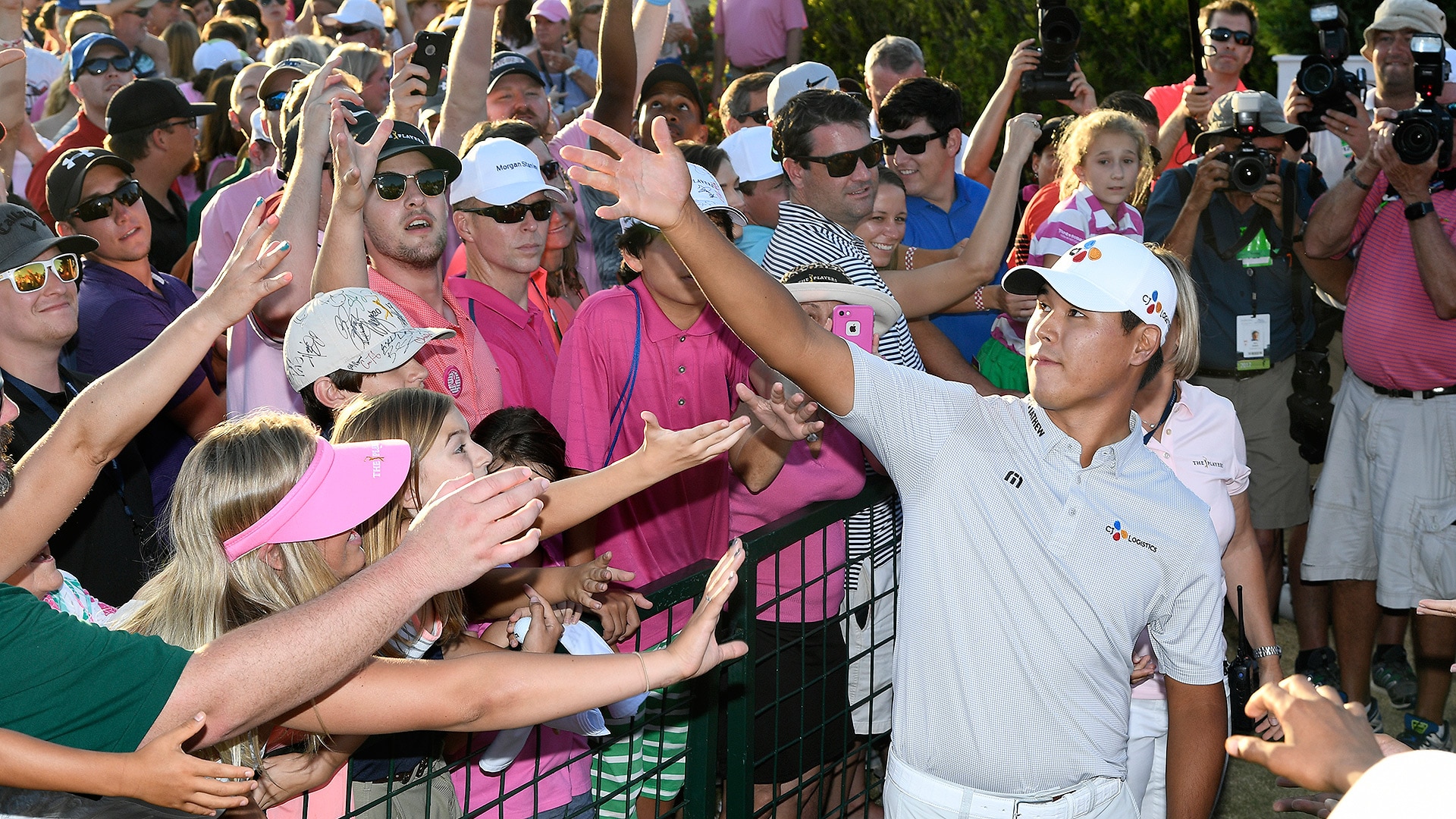 That was Pete Dye’s mission, to turn normally stoic Tour professionals into second-guessing, neurotic messes. The tee shot at the island-green 17th hole is little more than a 9-iron for the vast majority of the field and yet 69 attempts were unable to find terra firma this week. The 12th was transformed into a drivable par 4 for this week’s Players but turned out to be far too much risk for not enough reward with just 39 percent of the field taking the bait and taking a chance from the tee.

This unease hung low over the Stadium Course from the outset on Sunday, with 54-hole co-leaders J.B. Holmes and Kyle Stanley trading bogeys at the first to set the stage for what would become a walk of attrition.

“There's no safe place, so it can certainly make you feel uncomfortable,” Adam Scott figured after what he considered a victory of sorts with his tie for sixth place. “It's a hell of a test.”

Hell. That might do it as well. All told, six players held at least a share of the lead on Sunday only to succumb to the capricious confines of TPC Sawgrass.

Holmes never recovered from his opening miscue on his way to an 84, Stanley went around in 75, Lucas Glover briefly pulled into the penthouse thanks to an outward 32 only to finish with a 70 and Louis Oosthuizen spent his day trying to battle back from a double bogey at the fourth hole.

Ian Poulter might have had the most to celebrate if not for a shanked approach shot at 18 that found a palmetto bush on his way to a closing bogey. After going 39 holes without a bogey over the weekend, a streak that ended on the 12th hole, the Englishman was done in by the most Sawgrass moment ever – a second shot that went sideways into flora.

Yet no matter how difficult things appear to be there’s always one who remains above the fray, in this case a quiet 21 year old from South Korea. Si Woo Kim coolly remained above all the misfortune, opening his round with birdies at Nos. 1 and 7, where he took a lead he never relinquished.

He was fearless and fortunate, relaxed and resplendent.

Kim became the youngest Players champion and perhaps the most surprising since Craig Perks. He’d missed seven cuts this season, withdrawn from four tournaments and had posted four rounds in the 80s in the run-up to The Players.

And then there was his play on another windy day in north Florida. He missed three of his first five greens and ranked 39th in proximity with his approach shots, which is a mathematical way of saying when he did find a green he wasn’t particularly close to the hole.

Whether The Players is a major depends on who you ask and when you ask, but it certainly played like a major test this week. Like an NBA game that’s decided by a parade of free throws, this Players came down to the zero-sum game of mitigating mistakes.

Although he’d won before on the PGA Tour at last year’s Wyndham Championship, this was an entirely different animal and the baby-faced Fullerton, Calif., resident via Seoul endured the worst TPC Sawgrass had to throw at him.

“He said he felt no pressure because he’s leading. That’s when he had the least amount of pressure on himself,” said Kim’s caddie, Mark Carens. “He’s just so fearless out there that I just let him do what he does.”

Carens said it was his 24-footer for birdie at the seventh hole that seemed to steady Kim, who methodically pulled away from there, making the turn with a two-stroke advantage over Poulter and playing the relentless closing loop in a machine-like even par for a final-round 69 and a three-stroke victory.

“I was a little nervous before I played the final round,” Kim said. “However, I really could feel that my shot feeling was really good, I could just really be myself. That's why I could do well.”

Just being a “little nervous” on the Stadium Course is testament enough to Kim’s confidence, or maybe it was youthful indifference, but given the circumstances his performance was nothing short of remarkable.

No other course of a non-major variety challenges players like the Stadium Course, particularly under Sunday’s conditions with a title on the line and winds gusting to 20 mph from an entirely new direction (north) than they had all week.

“Every shot, every shot you hit virtually if you don't hit the shot you need to, you could make a number pretty quick,” said Glover, who tied for sixth after a series of closing bogeys. “I wouldn’t want to come here and play a round and expect to enjoy myself.”

For everyone with perhaps the lone exception of Kim, joy is not an emotion you would probably associate with TPC Sawgrass. Under the best of conditions it’s a reluctant companion, but Sunday’s scene was something out of a made-for-TV drama.

The last four twosomes on Day 4 played to a combined score of 26 over par, with only Kim and Poulter able to post an under-par card.

Kim, who moved into the top 30 in the Official World Golf Ranking with his victory, beat a world-class field; but it was even more impressive that he beat the most natural of emotions at TPC Sawgrass – being uncomfortable.