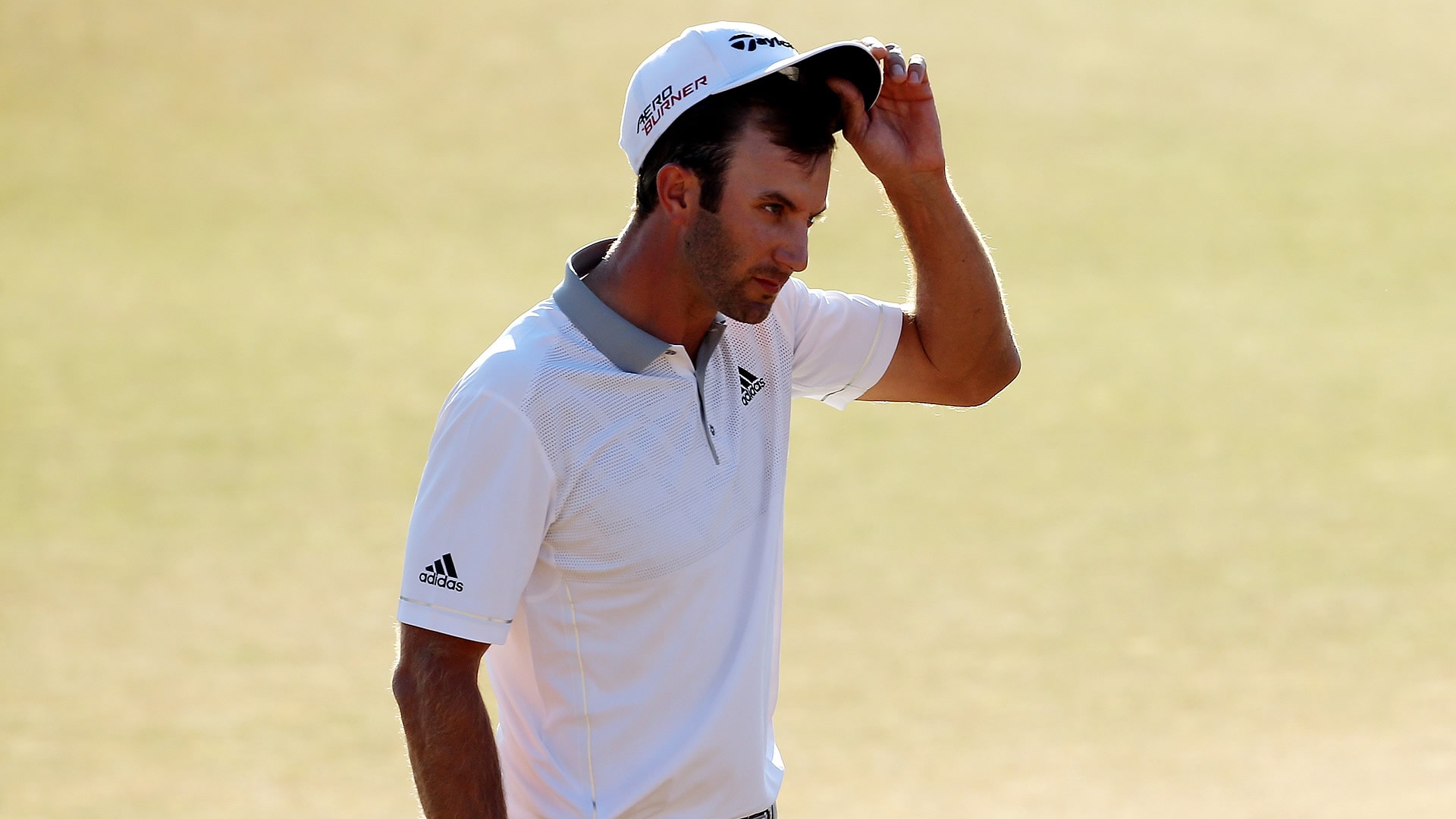 In the immediate moments after last year’s U.S. Open Dustin Johnson, hand in hand with his fiancée, Paulina Gretzky, walked up the steep hill away from Chambers Bay’s 18th green.

A mixture of stunned silence and appreciative applause blanketed the moon-like landscape as Johnson brushed past reporters on his way to the makeshift locker room.

“When I saw the photo of him shaking hands [with playing partner Jason Day], that look in his eyes you could see the pain,” said Johnson’s longtime trainer, Joey Diovisalvi.

It was an entirely predictable reaction to three-putting the 72nd hole of a major championship from 12 feet to lose by a stroke.

What isn’t as predictable is how short lived that moment of pain and suffering was for Johnson.

But in the time it took Johnson and Co. to reach Chambers Bay’s locker room the recovery was complete.

“I’m disappointed that I three-putted the last hole, but other than that, I had a damn good week,” Johnson said at the time. “I’m really happy with the way I played. I’m happy with everything in my game right now. I had a chance to win again in a major on Sunday, and I thought I handled myself very well.”

There are those, both inside and out of the mainstream sports media, who figured Johnson’s words were little more than self-satisfying psycho babble. It was the right thing to say about an utterly wrenching moment, but he didn’t mean it.

A chance to win a major championship is rare, even for a player as talented as Johnson.

But those closest to Johnson, those who walked that lonely hill with him last year at Chambers Bay and climbed into a quiet courtesy car for the uncomfortable drive back to his rented house tell a vastly different story.

“I reached over the headrest and gave him a pat on the back; I didn’t know what to say,” recalled Johnson’s manager, David Winkle. “He turned around and said, ‘Guys, lighten up, it’s just golf.’”

Even in the locker room in the moments after losing Johnson worked through the inevitable emotions quicker than one would think possible.

Was there anger? Sure. Frustration? Absolutely. Maybe even a little confusion. How, for example, did his last full shot, a towering second at the par-5 72nd hole, stay above the brown and bouncy hole when gravity and those questionable greens demand it release down below the cup?

But that’s just not Dustin.

“He has never spoken to me about Chambers Bay, never said one thing,” said Claude Harmon III, who, along with his swing coach father, Butch, works with Johnson. “A caddie asked him a few weeks later, ‘You going to be OK?’ Dustin was like, ‘What do you mean? I can’t change it. I don’t want to waste my time and energy on something I can’t fix.’”

It was familiar territory for Johnson. This is, after all, the same player who had taken a three-shot lead into the final round of the 2010 U.S. Open at Pebble Beach but imploded spectacularly with a front-nine 42 to finish tied for eighth.

Two months later he stepped to the 72nd tee at the PGA Championship needing a par to win, but instead grounded his club in what officials defined as a hazard and took a two-stroke penalty.

Whether he ignored the warning signs or was simply on the wrong side of fate is open to interpretation. All that matters to Johnson is he finished two shots out of a playoff that was won by Martin Kaymer.

Yet after each and every misstep the game’s preeminent bomber would shrug off his plight as perennial also-ran with an ease that defies conventional wisdom.

“Dustin has the ability to live in the moment, not in the past. That’s very unique about him,” Diovisalvi said.

His Wisconsin woes continued at Whistling Straits last year during the PGA when he began his final round with a quadruple-bogey 8, although he would rebound with a closing 69 to finish tied for seventh; and at this year’s Masters he rejoined the major fray only to come up short again with two double bogeys on Sunday.

Neither last year’s PGA nor this year’s Masters carried the shock and awe of his finish at Chambers Bay, but Johnson’s reaction fell in line with his own, unique status quo.

It may surprise some that hidden behind the neatly manicured beard and athletic swagger resides a bona fide optimist.

You know the deal, you can only want something so much; and make no mistake, he desperately wants to shed his major modus operandi, but in the truest sense he’s not bound by the expectations of greatness, either from within or via the inevitable external noises.

There were no dark moments in the days and weeks after Chambers Bay, no self-indulgent cracks in what is otherwise a flawless firewall.

Dustin Johnson misses a birdie putt to force a playoff at the 2015 U.S. Open (Getty)

As is his way, Johnson is focused only on the next shot, the next round, the next tournament.

“It’s almost like the world expects him to be wallowing in disappointment,” Winkle said. “It’s like they are frustrated that he is not. To an extent I get it, because he’s so unique in that regard, but his takeaway from all these near misses is that he’s really good at playing major championship golf and it’s just a matter of getting over that last hurdle and finishing things off.”

For all of Johnson’s many attributes – chief among them his abundant power and competitive moxie (you don’t win an event on the PGA Tour for eight consecutive years without a healthy dose of determination) – it may be that mystifying ability to not dwell on disappointment that is most valuable.

Those closest to Johnson point to Phil Mickelson as a paradigm of hope. Lefty was 33 years old when he won his first major at the 2004 Masters after spending the first decade of his career finding all manner of ways to lose.

“For Phil it was a decade, we kept saying he has to win [a major] some time. But with DJ, it’s he’s never going to win,” Harmon said.

Perhaps a better comparison would be Fred Couples, whose laid-back demeanor most easily dovetails with Johnson’s public persona.

“People made the same assumption about Fred Couples for years because he had this kind of laid-back demeanor on the golf course,” Winkle said. “They took it to mean he didn’t care, but that wasn’t true about Freddie and I can promise you it’s not true about Dustin.”

To be clear, there is a difference between competitive amnesia and selective processing.

He’s learned from each failure. At Pebble Beach in 2010, his first turn under the major spotlight, things moved too quickly for Johnson; while the ’10 PGA was a lesson in situational awareness, if not the unpredictable hand of fate. He could certainly putt better under the Grand Slam gun, and his aggressive style born from prodigious length is always an area of interest when a title is on the line late on a major Sunday.

But at Chambers Bay, where one could argue he lost the tournament well before he arrived at the 18th tee with three bogeys in four holes starting at No. 10, there were no regrets because there was no need.

The fact is Johnson wasn’t trying to be a hero when he settled in over his eagle putt on the 72nd hole.

“He had an outright 12-footer to win the U.S. Open; you wait your entire life for an opportunity like that,” Winkle said. “He told me, ‘You bet I was trying to make that putt.’ But was he trying to knock it 4 feet past, hell no.”

In simplest terms he was trying to win, a reality that makes his insistence that he’s moved on from last year’s championship baggage-free a little easier to digest. Whether or not the media and fans want to believe it is, much like all those near-miss moments, not worth dwelling on.