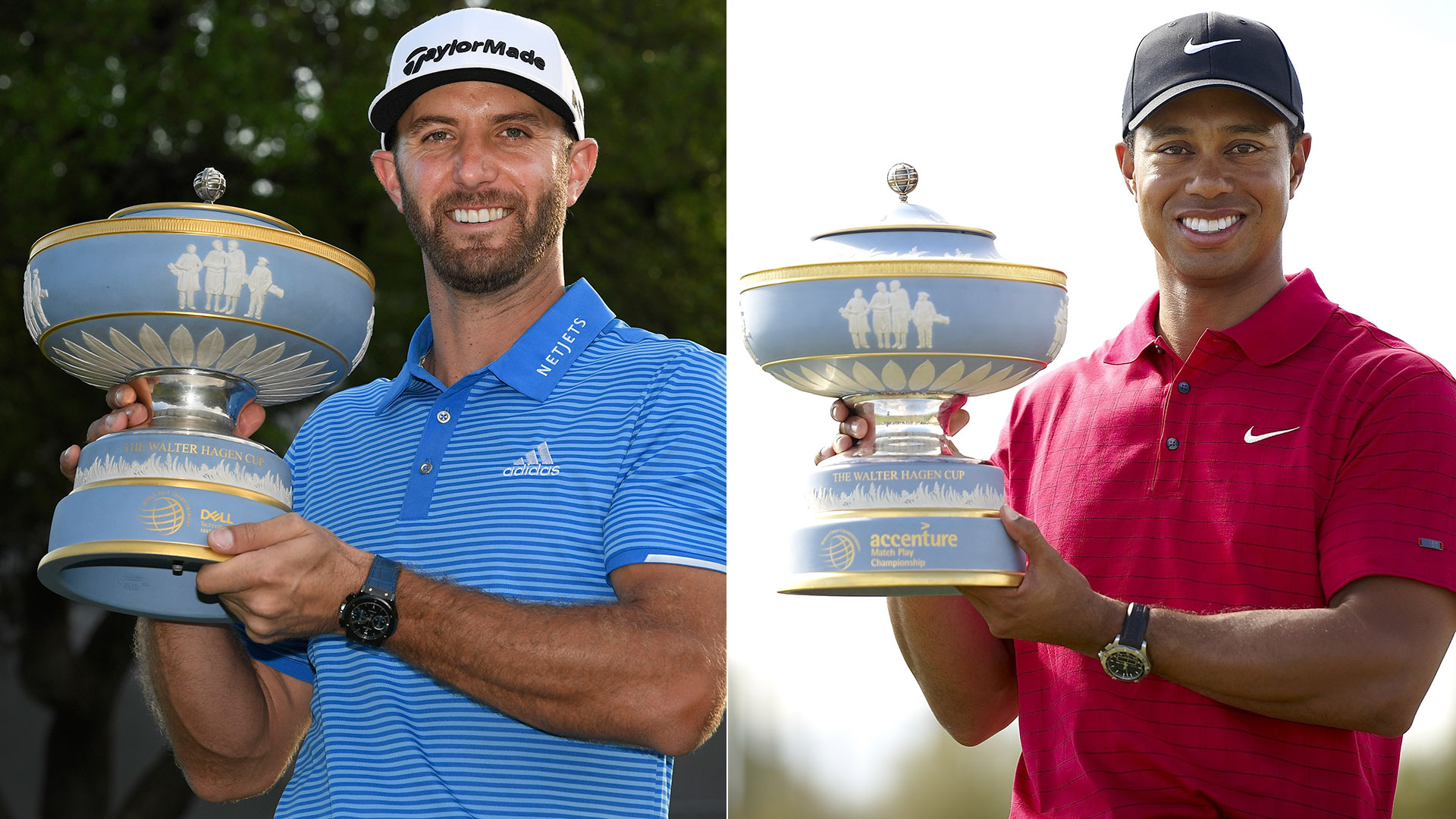 AUSTIN, Texas – Comparing any player with Tiger Woods has always been patently unfair. Only history and Jack Nicklaus are playing the same game when you consider Woods at his best.

That matrix hasn’t changed regardless of Woods’ continued inactivity or the ever-growing cast of would-be world-beaters. But as Dustin Johnson put the finishing touches on another seminal week any alternative comparisons ring hollow.

Since winning the U.S. Open last June, Johnson has won six of 17 starts, including the WGC-Dell Technologies Match Play in dominant fashion. That’s a 35 percent winning clip that includes a major and three World Golf Championship keepsakes to become the first player to claim all four WGCs.

But Johnson’s current run somehow echoes a little further than that of his contemporaries.

Maybe it’s because since overtaking Day atop the world ranking with his victory in February at the Genesis Open, Johnson has stretched his lead to more than 3 percentage points, which means he will maintain the top spot regardless of what happens at Augusta National in two weeks.

Or perhaps it’s how he’s winning, with a sublime combination of power and poetry of motion. At Austin Country Club he never trailed in 112 holes, played just five holes without a lead and saw the final two holes just twice, both times on Sunday.

But the most telling comparison to the guy in red may have been how he gutted out his final two matches with something less than his best game. It was almost Tiger-like.

“Absolutely,” said Butch Harmon, Johnson’s current swing coach who also worked with Woods from ’93 to ’03, when asked if the comparison is fair.

“He drives it great like TW back in the day. He's a good putter, not great, but good. He has learned to hit irons off tees which I've been pushing for seven years, and has a 3-iron with a graphite shaft that he hits miles. He really now has become the total package. As you know nothing rattles him. That is a big plus.”

To be historically honest, Woods’ run in 2000, for example, included nine wins in 20 starts (45 percent) and three majors along with a WGC high card, but that doesn’t invalidate the parallel.

Of course, the real test awaits in two weeks when the major championship season gets underway at the Masters. For all of Woods’ accomplishments, any legitimate similarities begin and end at the Grand Slams. But if the reaction from those who now must face the stoic bomber is any indication, there are the early vestiges – however slight – of the shadow Woods cast across leaderboards in his prime.

“He looks unbeatable,” Hideto Tanihara, who faced DJ in the semifinals, said late Saturday. “I hope he doesn't feel good tomorrow, so maybe I have a chance.”

A day earlier, Zach Johnson took a similarly light-hearted approach to what is becoming the 800-pound gorilla in the locker room.

“I'm going to start texting him tonight and get in his kitchen. I think his time is about done. Physically he's not looking great,” joked Johnson after securing his round of 16 date with destiny, which turned out to be a 5-and-4 rout.

Johnson is even starting to sound like Woods, giving an eerily familiar take on his play on Sunday at the Match Play, which featured his only two matches that went the distance.

“I definitely didn't play my best today in the first match or the second. So to win both those matches not having my best stuff is definitely a positive,” said Johnson, who defeated Tanihara (1 up) in his morning semifinal and star-in-waiting Jon Rahm (1 up) in the title match. “I'm definitely proud of the way I hung in there and played tough and just tried to never give away holes.”

And then there are the foreboding self-assessments. Overtaking Day in the world ranking has only galvanized Johnson’s desire to improve and he figured on Sunday that he’s not playing his best golf at the moment.

Always one of the game’s longest players, Johnson’s wedge game is now among the Tour’s best and his putting continues to be inexplicably overlooked. He led the field at the Match Play with 554 feet of putts made and converted every time he had to make a putt, like in his final four match against Tanihara when he rolled in clutch putts at Nos. 17 and 18.

There was a time in Johnson’s career when some wondered if he had the fortitude to close out big tournaments following near misses at the 2010 PGA Championship and 2015 U.S. Open, but those whispers have been replaced by rumblings of another variety.

“He has a long way to go to be TW, but he’s on a good track at the moment,” Harmon said.

Johnson is not Tiger Woods. There may never be another player like Woods. But the hyperbole of the comparison peels away when you study Johnson’s record over the last 10 months. It is by any measure Tiger-like.