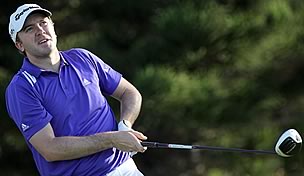 Talking Ryder Cup points in January is akin to fretting over NFL wild-card possibilities in September, the acme of competitive foolishness that wastes time and energy on an utterly elusive target.

Yet for a handful of globetrotting Europeans who occupy the transatlantic grey area between tours the path to potential team membership began long before last week’s season openers in Hawaii and South Africa.

For Martin Laird the road to Chicago and this year’s matches actually began in 2010 when he took up affiliate European Tour membership and finished fifth at the Alfred Dunhill Links Championship. The 124,594 euros he earned was enough to secure him full status in 2011. That’s when the Scot began to be squeezed by the small print.

Laird was married last July and knew he’d miss a month of competition as he and his wife, Meagan, set up shop in Scottsdale, Ariz. Because of this he wouldn’t be able to play his 13-event minimum as a full member in Europe which would, in turn, keep him from playing the circuit in 2012 and keep him off this year’s Ryder Cup team.

“I had two choices after 2010, either take full membership or none at all. If I would have taken membership and not gotten to my 13 (event minimum) there is a two-year ban,” Laird said. “I couldn’t have made the Ryder Cup team.”

Laird took up affiliate European membership this year but because of the policy pencil thrashing he missed out on the first four months of qualifying for the European team. With his runner-up showing last week at Kapalua he moved to 40th on the world points list, which is a third of the European selection system along with a European points list and two captain’s picks.

“I’m not going to play enough events for the Europe points list unless I go over there and win a couple of times. I’m going to go back and play four or five events in Europe and that’s going against guys that will play 30 events over that period of September (2011) to September (2012),” said Laird, who hopes to play the Scottish Open and Dunhill Links as well as the four majors and four World Golf Championships.

“With the world points list I don’t see why even if I don’t get into the top five (and earn an automatic selection) I can at least put my name in the picture to be a pick.”

Perhaps, but from his vantage point on this side of the Atlantic, Laird should look no further than fellow Scottsdale resident and Ryder Cup hopeful Paul Casey for a cautionary tale of selection woe.

In 2010, Casey was ninth in the world ranking and had played in the last three Ryder Cups yet was passed over by captain Colin Montgomerie because, some speculated, he had not spent enough time playing the European Tour.

Justin Rose suffered a similar fate despite a torrid mid-summer stretch that included victories at the Memorial and AT&T National. Rose and Casey were chilling oversights, or examples depending on your point of view, for PGA Tour-based Europeans and a reason for players like Laird to consider a more deliberate path to Ryder Cup membership.

Monty’s message was clear – it would take more than the minimum to rate a captain’s pick.

“(Laird) should play the three events in the desert (Abu Dhabi, Qatar and Dubai),” said European uber-manager Chubby Chandler, who has a number of clients, including world No. 2 Lee Westwood, splitting time between tours this year.

“He should come, play three weeks, gets some points, get some visibility, make it look as though he’s trying to play both, even though he is not. Just to make sure he gets in (European captain Jose Maria Olazabal’s) head and gets to know a few of the guys.”

Some, however, have speculated that Olazabal, who spent more time playing in the United States during his career than Monty, will be more accommodating to the plight of American-based Europeans when he makes his picks in late August. Nor has the Spaniard been as dogmatic as Monty about potential picks playing certain European stops.

It’s also telling that it is performance, not politics, that Casey puts his Ryder Cup faith in despite Monty’s perceived snub in 2010.

“I’ve made three now and the best way to make a team is to win golf events,” Casey said last month before being sidelined with a dislocated shoulder.

“It doesn’t matter where in the world they are, you just have to win. If you’re not playing full-time in Europe you’ve only got the world points list to come in on and that’s going to be filled with players who are winning.”

In this, the threadbare tour cliché “play better” seems the only way to cut through the convoluted European selection din. Even from Laird’s administrative limbo that has left him four months behind the pack his only chance to make the team is to play well regardless of which side of the transatlantic gap he’s on.

Medinah may seem a lifetime away, but for some Europeans it turns out it’s never too early to start thinking about the Ryder Cup.