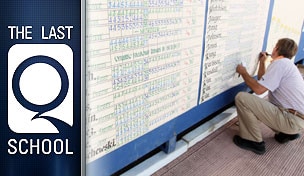 LA QUINTA, Calif. – Less than 10 minutes removed from a closing birdie on PGA West’s Stadium Course, Mathew Goggin stood with his head digging into the walls of the scoring trailer and his eyes closed tight.

Despite a birdie at his finishing hole the Australian finished the six-round stress test known as Q-School at 16 under par, one stroke outside the top 25 and a return trip to the PGA Tour. With that Goggin darted down the stairs and away from PGA West as fast as his weary legs would take him.

Not long afterward Q-School made a metaphorical dash into the history books.

The final Q-School with direct access to the big leagues didn’t disappoint, which is to say that there was plenty of disappointment, and a dollop of triumph, to send the institution into a fitting retirement as the circuit transitions to a new qualifying system next year and the Fall Classic becomes a feeder event for the secondary Web.com Tour.

Profiles of the 26 Q-School graduates

“I know you guys (media) enjoy this more than we do,” smiled Jeff Gove, who earned his first trip to the Tour via Q-School in nine starts thanks to a closing 67.

Perspective came easy for Gove, one of 26 players at 17 under or better to earn Tour cards for 2013. For Goggin, who declined interviews after his round, and many like him it will take days, if not weeks, to find that kind of solace.

Players like Edward Loar, who began the marathon with a 65 in June, or at least it felt like it started that long ago, maintained his spot inside the top 25 all week and stepped to the daunting 17th tee at 18 under. His tee shot caromed off a rock guarding the island green, hung in the air for a pregnant pause, ricocheted off another rock and finally dropped into the murky abyss.

Loar made double bogey on the hole and finished at 15 under.

After a week of record low scoring the pressure of Monday’s final turn finally put some teeth back into the Stadium Course, which got the best of some of final stage’s biggest names in Round 6.

Tour winners Camilo Villegas (15 under), Vaughn Taylor (14 under) and Heath Slocum (15 under) all failed to answer the call on Monday.

Slocum’s finish may have been the most gutting. At 16 under on the 18th tee the three-time Tour winner pulled his drive into the water left of the fairway for bogey to finish at 15 under. A day earlier he called a penalty on himself when his ball moved after he’d grounded his putter on the 17th hole of the Nicklaus Course.

“I’d never had anything like that happen in my entire career, so . . . lesson learned,” said Slocum, who closed with a 72. “They say crazy stuff happens at Q-School.”

Patrick Reed knows a thing or two about crazy. “Mr. Monday,” which he has been dubbed this season as a result of his nearly spotless record in Monday qualifiers, began the week 70-75 and was tied for 127th with four rounds to play.

Reed, who plans to marry his caddie/girlfriend on Dec. 21 in Houston, played the rest of the way in 18 under to finish on the number at 17 under and earn his first trip to the Tour.

“Every round was like a Monday and every Monday we try to shoot 6 under. That seems like a good number,” said Reed, whose closing 67 missed that mark by a stroke. “I’m six for eight on Monday (qualifiers). This improves me to seven for nine. It would be great next year if the U.S. Open ended in a playoff and I was in it. The other guy wouldn’t stand a chance.”

Reed, Henrik Norlander and Bobby Gates made the day’s biggest push to get inside the top 25, all three shooting 67 to vault from a tie for 46th to 22nd.

“I had a feeling all week that things were going to get better from playing the eGolf Tour,” Norlander said.

Si Woo Kim also made a solid jump, climbing from a tie for 30th to 20th, not that it realistically improved his fortunes for 2013. Kim became the youngest player to qualify for a Tour card thanks to a closing 68, but because he doesn’t turn 18 until June 28 he will not be allowed to become a member until next year’s abbreviated season is nearly complete.

Although Kim can play on sponsor exemptions and via Monday qualifying before his 18th birthday, and any money or FedEx Cup points earned would carry over after he becomes a member, he will have only about four starts before the start of the playoffs to secure his status for the 2013-14 season.

Fellow Korean D.H. Lee won’t have those issues. Lee closed with a 5-under 67 to take medalist honors at 25 under. Not bad for a player who lost two years of his professional career while serving a mandatory stint in the Korean military.

Lee overtook Steve Bowditch, who began the day with the lead but struggled to a front-nine 39 and weathered an eventful inward loop to finish tied for 10th place.

Joining him on Tour next year will be a pair of former European Ryder Cup players (Ross Fisher and Robert Karlsson); Chez Reavie, who became the second player to participate in Q-School a year after advancing to the Tour Championship, and two-time heart transplant recipient Erik Compton.

Eclectic? Sure, but that seems about right for the last Q-School. An end of an era highlighted by heartbreak and heroics, an institution that few will miss but many will remember. It’s a reality that made Gove something of a spokesperson for this final PGA Tour Q-School class.

“I’m glad we’re not doing it anymore,” Gove smiled. “And I’m just proud that I did it. If I didn’t make it it would have never happened.”

And it never will again.