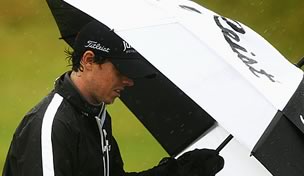 When everything you do is wrong, what motivation do you have to do right?

That thought, or whatever the Northern Irish variation would be, must be swirling about young Rory McIlroy’s head today, along with a healthy dose of Advil following another major championship for Ulster and another Guinness-laden victory celebration.

When the 22-year-old U.S. Open champion walked off Royal St. George’s on Sunday, wind battered and more than a little bitter following weekend rounds of 74-73 and a penalty stroke for a blown golf  ball, he was asked to sum up his Open experience.

He said, “I'm not a fan of golf tournaments that the outcome is predicted so much by the weather. It's not my sort of golf . . . looking forward to getting back and playing in Akron (WGC-Bridgestone Invitational), playing the PGA and getting back into some nice conditions.”

What Monday’s headline in the tabloid Daily Mail said was: “I hate the weather and can’t wait to get back to America’s sunshine.”

Seems something was lost in translation between the Queen’s English and the version McIlroy grew up speaking in Holywood, Northern Ireland. And the Mail story was hardly the exception.

Perhaps only media mogul Rupert Murdoch, whose phone-hacking scandal has rocked the United Kingdom, had a worse day in the press on Monday. And for what – honesty, an innate understanding of his own limitations, a long view of a career that has scarcely gotten off the first tee?

Other than the “looking forward to getting back” to America comment – the game’s new alpha male is limited to 10 tournaments on the PGA Tour this year and will probably only use nine of those starts – McIlroy’s comments were honest to the extreme, particularly when he was asked if he would consider changing his game to play links golf.

“No point in changing your game for one week a year,” said McIlroy, who also struggled in the wind and rain last year at St. Andrews when he ballooned to a second-round 80 in brutal conditions following an opening 63.

Never mind that many of the same pundits who have decried Martin Kaymer’s decision to add a draw to his repertoire specifically to play Augusta National – a move some say has led to a mini-slump for the German this year – are now thumbing their collective noses at the boy’s impudence towards the ancient game.

“You would think anyone growing up playing golf in Northern Ireland would have quickly come to terms with such things as wind, rain and cold. Not Rory McIlroy, apparently, who made a somewhat petulant departure from the Open by blaming the weather for a modest showing which saw him finish in a tie for 25th,” the Daily Mail story began.

And it wasn’t just the Fleet Street types who took McIlroy to task. On Tuesday Welshman Ian Woosnam told the Associated Press, “to be a true golfer, you have to be able to play in different golf conditions.” While 1994 Open champion Nick Price reasoned that McIlroy, “is going to have 20 or 30 Opens in his career – he doesn’t want to have that attitude.”

So McIlroy doesn’t like to play golf in a typhoon, who does? I mean, besides Darren Clarke.

McIlroy is an Ulsterman to his core but has a distinctly American game, complete with a high ball flight and aggressive short game, the byproduct, no doubt, of having grown up playing Holywood Golf Club, a parkland-style course with small greens and large fairways. It’s the kind of skill sets that play well from Whistling Straits to Magnolia Lane as evidenced by his scorecard in the last five majors – T-3 (2010 Open Championship), T-3 (2010 PGA Championship), T-15 (2011 Masters), victory (2011 U.S. Open) and T-25 (2011British Open).

Besides, to reason that McIlroy doesn’t have the game to play links golf is to ignore the facts, This is, after all, the same swing that produced a course-record 61 at Royal Portrush Golf Club when McIlroy was 16 years old and he enjoys a regular game at Royal County Down Golf Club, two of the most wind-whipped layouts this side of Fife.

“My game is suited for basically every golf course and most conditions, but these conditions I just don't enjoy playing in really,” said McIlroy, who is making a habit out of having the clearest head in the room. “That's the bottom line. I'd rather play when it's 80 degrees and sunny and not much wind.”

It’s also concerning that McIlroy is already falling victim to the media’s unrealistic expectations, with more than one United Kingdom publication referring to his  “mediocre 25th-place finish” at Royal St. George’s.

From the moment he steamrolled the field at Congressional the comparisons to Jack Nicklaus have been almost inevitable. A few weeks ago we warned in this space that the last 17 majors are usually the hardest to win. In light of what has transpired since Sunday perhaps another warning is in order.

In this Price is correct, the young Ulsterman has 20 or 30 more Opens to make his mark on the claret jug, and there’s no way we’re betting against him. Not with that swing.