Gallacher proving he has game to be giant slayer 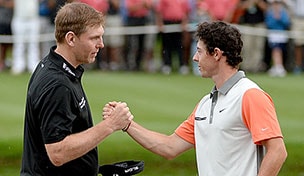 DUBAI, United Arab Emirates – It happens every two years like clockwork, a little-known European flies under the American radar and headlong into the role of giant slayer.

In 2012 at Medinah, Nicolas Colsaert – the Belgian Bomber, the Muscles from Brussels – singlehandedly whipped the American power two-ball of Tiger Woods and Steve Stricker in Friday’s four-ball action and in 2010 in Wales it was Martin Kaymer, who compiled a 2-1-1 record as a rookie.

Although there is still plenty of time before the transatlantic two dozen square off later this year in Scotland, a prime Cinderella candidate emerged on Sunday at the Dubai Desert Classic.

Stephen Gallacher is as nondescript as they come. Red hair, fair skin, think Opie Taylor with a deep Scottish brogue. It wasn’t so much his victory or the fact that he became the first player to win back-to-back Dubai titles that impressed so much as it was the way he handled himself under the brightest of glares.

When Gallacher set out on Tuesday paired with Tiger Woods, he could have been forgiven if he got caught up spectating alongside the world No. 1. His only experience with Woods before the 18-hole Champions Challenge was at the 1995 Walker Cup as an amateur, when he lost a four-ball match to the American.

But Gallacher beat Woods head-to-head on Tuesday, 69 to 71, and again on Thursday when they were grouped together, 66 to 68, and on Friday, 71 to 73. Imagine what that could do for the man’s confidence come September if he finds himself across the first tee from Woods at Gleneagles?

He would go on to beat everyone on Sunday in Dubai, thanks in large part to a closing nine of 9-under 28 on Saturday, including world No. 6 Rory McIlroy and American phenom Brooks Koepka.

That he won after a not-so-great start to his final round is a testament to how far the 40-year-old has come in just the last 12 months. Before last year’s victory in Dubai he had exactly one “W” in 16 seasons on the European Tour.

“You know, it's hard to win. I've put myself in positions to win. The crucial one was last year and to get the second win after so long,” said Gallacher, who closed with an even-par 72 on Sunday for a 16 under total.

In a convoluted way, now comes the hard part.

He’s dreamt of playing for Europe in a Ryder Cup his entire life and the perfect convergence of his solid play and the matches return to Scotland this year could be a power motivator or distraction, depending on how one rationalizes pressure.

But Gallacher’s fixation goes well beyond proximity and the love of an event.

As he darted through crowds and rain drops late Sunday at the Emirates Golf Club, he paused at the mention of his uncle, European great Bernhard Gallacher. Uncle Bernhard played on eight European Ryder Cup teams and captained the Continent’s squad on three occasions, including in 1993.

Gallacher’s expressive face twisted into a smirk at the irony and recalls meeting Watson during the ’93 matches and what that loss meant to his uncle.

“I'm not going to get too far ahead of myself, but certainly with my uncle playing in it eight times, captained it three and vice captained it two, so it's pretty much all I grew up watching,” he admits.

“And then, when it's 37 miles from the house; in my generation, it's never going to be in Scotland again, so it's always been a long‑term goal of mine to play in a Ryder Cup. It just so happens that the best spell I'm having is during the one that's in Scotland.”

Any sports psychologist will trip over their couch to remind an athlete in a position like Gallacher’s that you can want something too much. He has the advantage of being exempt into the top events this year, including the year’s first two World Golf Championships and the Masters, which will help.

But it won’t temper the desire, and for Gallacher maybe that’s a good thing. After a lifetime of middle-of-the-pack performances he has found his stride and he knows at 28th on the European Ryder Cup points list that solid play, not sentimentality, is the only way to earn a spot this fall at Gleneagles.

“That’s my long‑term goal but the short term is to try to get into all these big events, but then you need to play well in them, as well, to amass the points to give (European captain Paul McGinley) a headache, hopefully,” he smiled.

Officials in Dubai celebrated the event’s 25th anniversary with a champion’s week, wooing all 20 living winners back to the Emirates to mark the occasion, and a true champion emerged with all the markings of a September giant slayer.