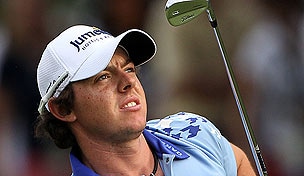 The accolades have rained down like a Northern Irish squall. As countryman Graeme McDowell opined, you can run out of things to say about Rory McIlroy’s victory last week at Congressional, but that hasn’t stopped the pundits from trying.

Among the headlines that awaited Monday morning, The Washington Post went with “The future is now,” while Sports Illustrated gave us “Golf’s New Era.” With a monsoon of respect to both institutions, Dewey didn’t win.

If the Chicago Daily Tribune’s infamous “Dewey defeats Truman” headline in 1948 was a tad premature, the modern media’s incessant hyperbole is equally misplaced. McIlroy’s eight-stroke U.S. Open romp was historic, brilliant, as the Northern Irish might say, maybe even a game changer, but to declare that the 22-year-old is poised to step in for the injured and widely invisible Tiger Woods is unfair and wildly unrealistic.

For the record, McIlroy now has one major – the same number, it should be noted, as Shaun Micheel, Ben Curtis and Todd Hamilton. Hold off on the emails and “reader’s comments” for a moment – we’re not saying McIlroy is a similar “one-hit” wonder, just that we may be getting ahead of ourselves.

That he’s been in the hunt at four of the last seven majors and is possibly two cards of 80 away from the front-end of a “Rory Slam” is certainly reason to sit up and take notice, but before we dub him the next king let’s take a moment and listen to the man himself.

It’s worth noting that at 22, McIlroy may have been the coolest head in the Congressional media room Sunday night.

It wasn’t that long ago we were handing Woods the major championship crown, Jack Nicklaus’ record of 18 Grand Slams an easy mark as he marched to history at an alarming clip. He’d won 14 majors in 41 Grand Slam starts as a professional, a .350 batting average that put the Golden Bear’s benchmark in danger long before Woods’ 40th birthday.

But then Woods got sideways on a residential Isleworth thoroughfare, sent to the DL by an assortment of injuries and, in the wake of Wednesday’s announcement he will not play next week’s AT&T National, appears destined for the toughest climb of his career.

Like they were for Nicklaus before him, the last four majors promise to be the toughest for Woods.

Similarly, forgive our reluctance to anoint McIlroy the next king. Despite the media’s quick-draw declarations there is going to be nothing easy about the next 13 majors for McIlroy.

The best player won, by a touchdown and then some.

Nor is this about the level of competition. Many of the same scribes who have declared McIlroy the game’s next alpha male have penned that his victory at Congressional came against a deeper level of competition than Woods faced, an opinion that dismiss Ernie Els and Phil Mickelson, a Hall of Famer and a future Hall of Famer, respectively, as bit players.

The field is not deeper now, although the collective confidence may be at an all-time high thanks in no small part to Woods’ recent swoon.

Lost amid the Rory hyperbole is also the logistical truth that the Northern Irishlad is happier at home, content to ply his trade on the European Tour with only the occasional American cameo on his calendar.

As a former PGA Tour member who let his membership lapse last year, McIlroy is limited this season to 10 Tour starts plus The Players Championship, which he skipped. He already has seven Tour starts and currently plans to play only the WGC-Bridgestone Invitational and PGA Championship the rest of the way.

On this McIlroy’s charismatic manager Chubby Chandler has been clear – don’t expect to see his client playing full-time in the United States any time soon.

“It will be three or four years before he tries the PGA Tour again,” Chandler said in April at Augusta National. “The scoreboard says he’s probably got it right. He’s very aware that he doesn’t want to get burnt out. It’s not a slap on the (PGA) Tour. If he could play 12 or 13 he’d be all right.”

Bypassing a PGA Tour card is certainly his right and it’s impossible to argue with the results McIlroy’s limited schedule has produced, but from a pure marketing point of view it will be difficult to build the kind of momentum Woods had with a limited Tour schedule.

Time will tell if McIlroy eventually challenges Woods, or Nicklaus, for the Grand Slam crown. Recent history certainly suggests he’s on the right road, but as the last two years have taught us that byway is filled with more potholes than a Northern Irish alley. Let’s enjoy the moment and let history and his own limitless potential dictate how far McIlroy will go.