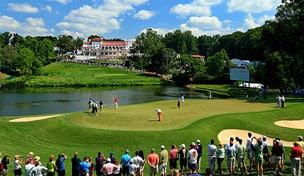 BETHESDA, Md. – “Let’s start calling names,” one caddie announced on Congressional’s practice putting green on a cool Wednesday afternoon. Tough to say what is more unnerving, actually playing a U.S. Open or waiting out all of the pre-tournament hype.

With each passing day players have watched grass grow, an occupational hazard of sorts at the national championship, and green speeds trend north at the rate of about 1 foot per day on a Stimpmeter that is said to be bound for 14 1/2.

The only thing that’s certain is that someone will be tested on Sunday and there’s a 3-in-4 chance that someone will fail miserably and dramatically. On this recent history is rather clear. It’s happened on three of the last four major championship Sundays, 54-hole pretenders playing the final loop with a stroke average of 81.

Call it LeBron James Disease, as in hopefuls can only muster three good quarters . . . eh, rounds.

Blame it on Tiger Woods. The man has spit up just a single 54-hole Grand Slam lead, way back in 2009 to Y.E. Fleck . . . make that Yang. He made it look easy, made it look natural, he wooed us into a false sense of Sunday security.

From that twisted reality we have been given Dustin Johnson, who turned a three-stroke 54-hole U.S. Open lead into a footnote with a triple bogey-double bogey-bogey start to his final turn last year; Nick Watney, who went from three clear to clearly out of it with a front-nine 43 at the PGA Championship; and Rory McIlroy, four ahead this year at Augusta National until he played the turn on Sunday in 6 over and signed for an 80.

The old cliché about putting and driving was half right, you play Rounds 1-3 for show, No. 4 is for the dough.

So forgive the anxious masses, with that kind of reality looming it’s easy to be weary of the Grand Slam “green mile.”

Not that any of the aforementioned meltdowns have any interest in repeating or reliving history. Within minutes of each other McIlroy and Johnson marched through Congressional’s media room this week saying largely the same thing - they both broke into a sprint at the game’s ultimate marathon.

For Johnson it was the approach and quick chip at Pebble Beach’s second hole, and possibly the tee shot at No. 4. McIlroy’s moment came at Augusta National’s 10th hole when he pulled his driver between two cabins, some 150 yards left of the fairway, hit a tree, a bad chip and every shot before its time.

Johnson has the luxury of time on his side, an entire calendar to go through all the steps of disappointment – anger, denial, dissection and ultimately acceptance. Within days of his Pebble implosion he sat down with swing coach Butch Harmon for a postmortem. The ultimate assessment was he simply got too fast and the fix has come in stages, with the last piece his recent hiring of veteran caddie Joe LaCava.

Asked on Tuesday if he thought having LaCava on the bag last year may have made a difference at Pebble Beach Johnson showed surprising clarity: “Maybe; (former caddie Bobby Brown) is great, it was the first time he’d been in that situation before as well, but everything was going 1 million miles per hour.”

McIlroy has reached a similar epiphany in recent weeks, repeatedly dissecting all seven pops on Augusta National’s 10th hole, or at least what he remembers of the blur. Over the weekend during a friendly round at storied Pine Valley Golf Club with his manager Chubby Chandler it was certainly a topic of conversation.

“I think he got what I was saying,” Chandler smiled.

Talk of a golf course that seems poised to yield birdies, along with its share of bruises; the game’s continued Transatlantic power shift and missing headliners was, in its own way, small talk to avoid the final-round elephant in the U.S. Open room. The question each of the 156 players want to be asked but only a few are capable of answering.

It’s not who will win? It’s who can win?

Johnson and McIlroy clearly belong in the conversation, as does Phil Mickelson who arrived at Congressional with a driving iron in the bag and a confident look in his eye. Lucas Glover has the swagger of a two-time champion and needs a win at Congressional to complete the (Bethpage) Black & Blue (Course) combo.

The last time the Open was played this side of the Capital Beltway four players needed a par at the 17th hole to win – only Ernie Els delivered. Rees Jones, with an assist from the U.S. Golf Association’s Mike Davis, tinkered the par 4 into the back end of the lineup for this year’s tilt, a Grand Slam move by any measure.

For most, just getting to the downhill 523-yard hole with a chance will be the toughest climb. When the final cards are signed that’s ultimately all any player really wants and, at least in the void left by Woods, the toughest part of the game’s toughest test.

Until then the field will settle for a simple consolation – let’s start calling names.