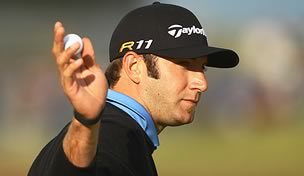 Getty Images
SAN ANTONIO TX - MAY 16: Paul Goydos waits on the 1st tee during the third round of the Valero Texas Open held at La Cantera Golf Club on May 16, 2009 in San Antonio, Texas. (Photo by Marc Feldman/Getty Images)  -

SANDWHICH, England – One of the most demanding days in major championship golf begat what promises to be the most volatile grand slam finale in recent memory that will ultimately be decided, as it always is at the game’s oldest tilt, by another fearsome forecast.

Darren Clarke still leads, the front-running Ulsterman almost a cliché following an effortless 69 on a day that defied even the most high-tech rain gear. His one-stroke advantage will dominate the headlines on this side of the Atlantic, but the subtext to Sunday’s showdown will be what is shaping up to be an American revival.

Relegated in some circles to Dodo-like extinction, American golf has become the Washington Generals to the Globetrotters of late – pay-for-play punch lines that have been relegated to sixth-man status by the four corners of the map.

There was last year’s one-point mud wrestling loss at The Ryder Cup, a world ranking that features just four Americans in the top 10 and a grand slam drought that stretches back to last year’s Masters. On the baseball diamond 1-for-5 gets one optioned to Single-A Peoria. On the golf course, or more to the point in the golf media, it’s a reason to second guess the college system, the PGA Tour, lucrative contracts and global warming.

But if perception is indeed reality, Saturday’s slog through the worst weather this side of Muirfield in 2002 was nothing less than a step in the right direction for the red, white and blue.

The leaderboard at the 140th Open Championship has more American flags than a Fourth of July celebration. All total, six of the top 10 are American, including primary contender Dustin Johnson who powered his way through a throat infection and over much of Royal St. George’s pitfalls for a day’s-best 68 which was matched only by fellow American Rickie Fowler.

“Apparently the death of American golf has been greatly exaggerated,” Joe Ogilvie tweeted from half a world away.

There are no guarantees that the United States can get off the grand slam schneid, particularly considering Clarke’s commanding performance, but there is reason to be optimistic.

Not that any members of the U.S. contingent were overly concerned with the perceived slump.

“The European Tour guys have been playing well, but I don’t think there’s anything wrong with Americans,” said Johnson, who will head out in Sunday’s final group at a major for the third time in the last five grand slam gatherings.

At least that’s been the collective take.

“I guess we need to play better,” Glover said on Friday. On Saturday, they did.

After Johnson and Fowler, who is tied for third place three shots back, sits Glover (73), a resurgent Anthony Kim (70) and a refreshingly optimistic Phil Mickelson, who turned a round of sixty-something into a 71 with a collection of missed putts.

Still, Lefty is only five back at an event that has been the professional equivalent of advanced math. He has just a single top 10 in 17 Open tries, had broken 70 just once in his last 10 rounds and arrived on the southeast English coast with a new game plan – play this Open like it was his first.

“There’s nothing more exciting than on Sunday having a chance in a major,” Mickelson said. “I know that I’m not leading, but I’m also right there. To me that is so much fun, and I’m excited. I feel like it’s my first time over here.”

We’ve heard, for some time now, that this Continental shift is nothing more than a natural cycle, but on Saturday the Americans were more concerned with the cyclone that buffeted the English coast.

In what many called the worst conditions they’ve ever played in the day’s scoring average ballooned to 74.69. Long-hitting Gary Woodland made an 8 at the par-5 14th and yet still sounded like a man who had just gotten away with something.

Trevor Immelman needed six towels, 10 gloves and 72 strokes to round his wet and wild 18 on Saturday and considered himself one of the fortunate ones. “That could easily be the worst conditions I’ve ever played in,” he offered without a hint of hyperbole.

Even Old Tom Morris, eh . . . Watson, a veteran of 34 Opens who defied time and the torrent with a 72, called Saturday’s slop the worst he’s seen since that raw day in ’02 at Muirfield. We’ll take his word for it.

Even more concerning, particularly for those holding out hope for an American winner, was a forecast for Sunday that looked frighteningly similar to Saturday’s ordeal.

“A lot of blank faces coming off the golf course wondering what the English summer is all about,” is how Englishman Paul Casey summed up Saturday’s action.

Whether the American slide is real or a media-driven perception doesn’t matter, not when Clarke, raised and recently returned to Northern Ireland’s Royal Portrush links, is playing like Samuel Ryder’s chalice is waiting for him on Sunday and the weatherman is churning out carbon-copy forecasts for the finish.

On this home-field advantage goes to the Ulsterman with webbed feet and a wide smile. But there was still plenty of optimism, if not for American golf than for the overall outcome.

“What are you laughing about?” Watson asked the assembled scribes after his round. “You just love to see us pros suffer.”

Maybe, but we also love a good story. And right now the transatlantic scuffle is the best tale in town.