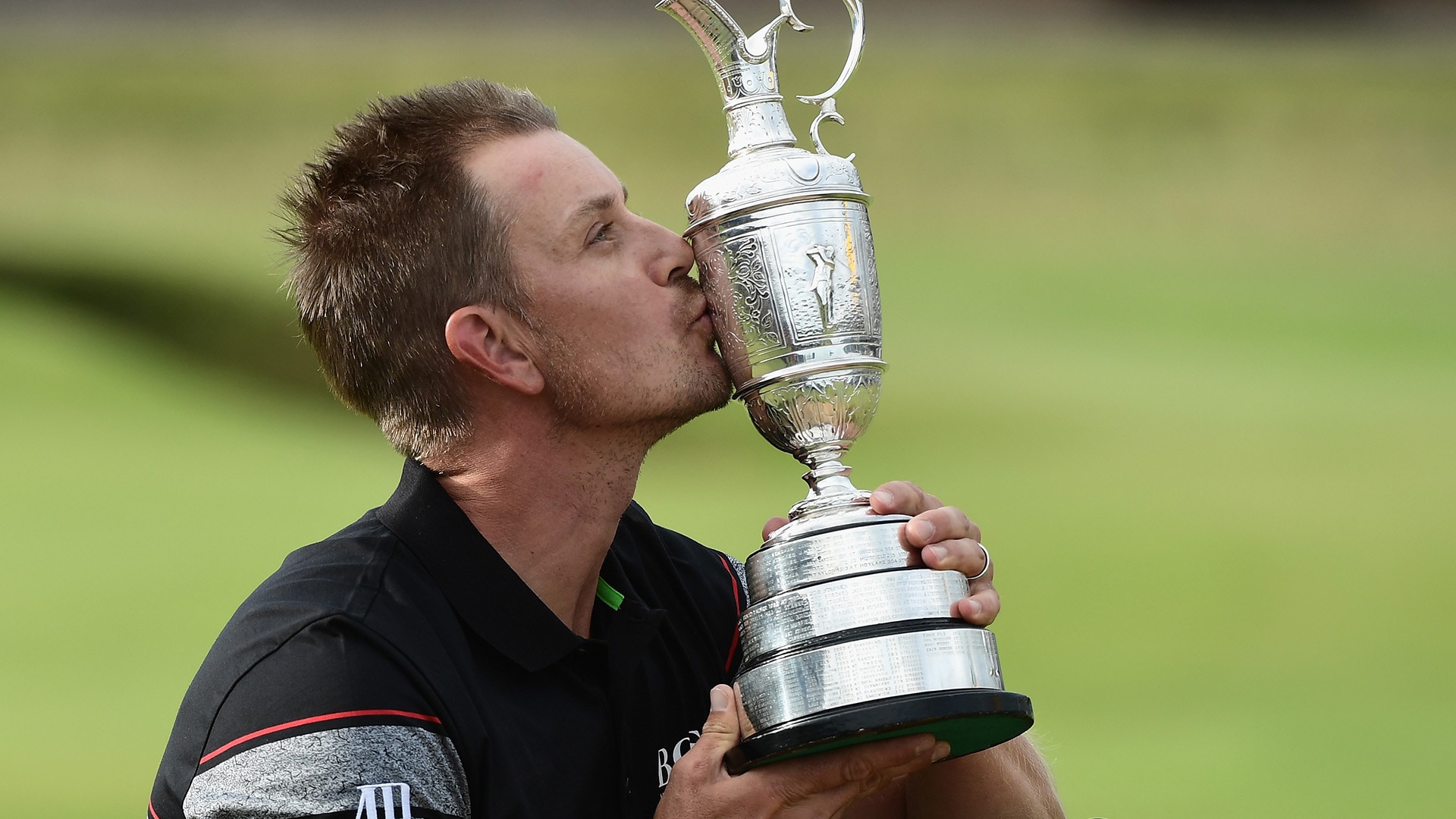 TROON, Scotland – As Henrik Stenson stepped to the first tee Sunday afternoon - the 40-year-old in the day’s 41st game making his 42nd start in a major - the ubiquitous gloom that had engulfed the Firth of Clyde for two days finally relented.

The sunshine arrived just in time for the Swede, who would need a sunny disposition every bit as much as that machine-like swing to win his first major.

Boyishly charming off the golf course, brutally tough on himself when he’s on the clock. In 2014 at Royal Liverpool his frustration boiled over in Round 1 when he snapped a club over his knee; and at the ’13 BMW Championship he destroyed a driver and a locker after a bad day at the office.

Although each time he would clear away the demons, following his meltdown in ’13 in Chicago with a victory at the Tour Championship to claim the FedEx Cup, those types of outbursts always seemed to be boiling just under the calm surface.

That frustration is born from Stenson’s desire for perfection, which is equal parts burden and blessing.

“There’s three [swings], good, very good and excellent. Two of those he doesn’t like to accept,” said Stenson’s longtime swing coach Pete Cowen. “He’s comfortable just 33 percent of the time. He could be on very good, but he wouldn’t be happy. He has to try to push it to perfection. Sometimes he does.”

Sometimes like on Sunday, when the darkness that can cloud his mind is peeled away through clarity of thought and a singular focus to produce something truly special, it results in a closing-round 63. A scoring record. A major.

What some on this side of the transatlantic divide dubbed the “Duel in the Wind,” a nod to the 1977 Open bout between Tom Watson and Jack Nicklaus, lived up to that lofty association right from the first hole.

Stenson and Phil Mickelson, who began the final round a stroke off the lead, teed off at 2:35 p.m., by 2:47 p.m. Stenson was one back, the byproduct of a dart from Lefty at the first to a foot and a sloppy bogey by Stenson.

“We bogeyed the first and I thought, ‘Oh no, not today.’ But from there on in he was unbelievable,” said Stenson’s caddie Gareth Lord.

From there, the main event evolved into a high-stakes game of tag, with the duo trading the lead like a Scotsman changes socks on a cold and wet summer day.

Stenson – an Orlando, Fla., resident via Gothenburg, Sweden – retook the lead with his second consecutive birdie at the third, Mickelson tied him with an eagle at the fourth and the tandem traded birdies at the sixth to move to 15 under, a touchdown shy of the nearest contender.

But just as the Masters doesn’t start until the back nine on Sunday, this Open didn’t come full stride until the final two-ball turned for home into a healthy breeze.

The epic exchange continued with Henry and Lefty rolling in a combined 40 feet of birdie putts at the 10th hole. Stenson blinked with a three-putt bogey at the 11th, the week’s toughest hole and his first miscue on the back nine since Thursday.

Mickelson answered with a scrambling par save at the 12th that included a visit to the heather and a 25-foot Hail Mary, and Stenson countered with a 15-foot birdie at the 14th to regain the advantage.

All told, there were seven lead changes on Day 4 at Royal Too Much To Be True.

The idiosyncratic Iceman put the match away with a downhill 5-footer for birdie at the 16th hole to remain 2 up with two to play – dormie in match play, destiny for Stenson.

“The putt on 16 was probably the most pressured one,” said Stenson, who matched the scoring record of 20 under at a major. “Phil missed his eagle putt, so it looked like it was going to go in, and I expect him to make every putt; you have to.”

It was all the kind of give and take that some thought Stenson incapable of, considering his penchant for poorly timed implosions and a less-than-reliable putter.

He’d won a few weeks ago at the BMW International Open on the European Tour and had certainly given himself plenty of chances to win a major, having finished in the top 5 on seven occasions; but even Stenson acknowledged earlier this week that at 40 his chances were diminishing and the pressure building at an equal clip.

“I'm not going to play these tournaments forever and ever,” he said after a second-round 65. “I don't have another 50 goes at them, so I better start putting myself in position and giving myself chances if I want to make it happen.”

The dichotomy of Stenson can be striking. In one moment he can be engaging and entertaining.

Other times he can be stoic, his emotions locked away behind the wrap-around sunglasses and an expressionless face – a persona that earned him the nickname “Iceman.”

But as is normally the case with complex individuals, nothing is as it seems with Stenson.

“Everyone calls him the Iceman. I can tell you sometimes he is not, but today he was,” Lord said.

Given his track record in the game’s biggest events, it would have been out of character for Stenson to reveal that when he arrived at Royal Troon this week a calm born from unseen, and largely unfounded, confidence gripped him.

“I felt like this was going to be my turn,” he said with the claret jug safely perched to his left. “I think that was the extra self-belief that made me go all the way this week.”

Even after his bogey at the first Stenson remained convinced. Even as Mickelson, who closed with a bogey-free 65, answered every challenge, he clung to his conviction.

The telling moment came quietly late on the front nine when Stenson glanced at Lord who’d just lit a cigarette. About a year and a half ago Stenson bet his bagman that if he won a major Lord would quit smoking.

“I knew he felt pretty good because we were going down the seventh [hole] and he looks at me and says, ‘You better enjoy that [cigarette],” Lord laughed.

It was obvious that Stenson, the quirky and complicated Champion Golfer of the Year, was enjoying every minute of his major breakthrough.