Internationals look to restore parity in the Prez Cup 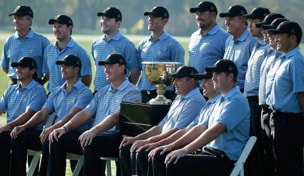 DUBLIN, Ohio – There is no more authoritative voice in golf than Jack Nicklaus, 18 major championships being the ultimate benchmark and all. But even the Golden Bear sensed the urgency that has beset the Presidents Cup.

“The International team is a lot better than you think it is,” said Nicklaus, although this week’s host sounded like he was making his pitch for parity more so than stating fact.

Or maybe Nicklaus was just lowering expectations, because the Internationals can’t be any worse than the record indicates.

With apologies to this week’s dozen, you are what your record says you are.

The Rest of the World hasn’t hoisted the cup since 1998. Truth is they haven’t made it a game since 2003, when darkness and some loose interpretations of the rules led to the match’s only tie.

The average margin of defeat for the Internationals has been 4 ¼ points the last four outings. More importantly they haven’t won a foursomes session since Day 1 in 2003, and have only taken a lead into the Sunday singles session twice.

International captain Nick Price, along with former captain Greg Norman and future captain Ernie Els, pitched a format change that would have reduced the number of team matches to four from six for each session, allowing, the thinking goes, the Internationals to hide some of the weak links in the lineup. PGA Tour commissioner Tim Finchem rejected that idea.

If the U.S. side cruises to its fifth consecutive victory this week, as many predict, maybe the commish should consider letting Price & Co. annex Florida – the Sunshine State is, after all, home to the same number of International members as U.S. players (two).

For the blue-and-gold crowd, their best hope may rest with a shockingly inexperienced team (the International side includes seven rookies) and Price’s fresh perspective.

Based on Tuesday’s practice pairings, it seems Price is utilizing a version of 2008 U.S. Ryder Cup captain Paul Azinger’s pods system to take advantage of the natural pairings of six South Africans and three Australians.

Price also seems to have plucked a page from U.S. captain Fred Couples’ book, a hands-free, laidback approach to what is always an intense week, particularly off the golf course.

“Two years ago (in Australia), we had a lot of dinners and it was very exhausting, especially after matches,” said Jason Day, who is a member at Muirfield Village. “Because when you go out with the team, you're going out for two to three hours at most and you're sitting there talking to people. ... So we are having maybe two dinners and that's about it. We are not really doing too much (this week). We're having dinners inside the hotel and that's it.”

That, however, will do little to solve the International’s woeful foursomes play. The margin of victory two years ago at Royal Melbourne was four points and the U.S. dominated the alternate-shot portion of the competition to the tune of 8-3.You do the math.

But then the foursomes problem is nothing new. Two years ago, then-captain Greg Norman tried to have his team arrive as early as possible in Australia to build familiarity, which is crucial to the alternate-shot format.

“If you look at the European side, talking to Colin Montgomerie a few years ago, he was told he was playing with (Nick) Faldo and he was sent a version of Faldo’s golf ball well before. Tiger is going to play with (Jason) Dufner and (Matt) Kuchar, so they only need to worry about two or three different kinds of golf balls,” said Frank Noblio, Norman’s assistant captain the last two cups.

“On the International side a lot of the guys don’t know each other and they don’t play a lot of golf together. Foursomes are an awkward one. You try to get the team to gel together. They don’t have a lot of experience in it.”

It was the elephant in the International team room when players arrived on Monday and Price set the tone early. When he sent his players out on Tuesday he had them compete in a modified alternate-shot format for their own money.

If there is any reason for International optimism it is a schedule adjustment for this year’s matches. For the first time since 1996, Thursday’s opening session will be fourball play. Think of it as a soft opening that should, in theory, allow the rookies to ease their way into the arena.

But that will mean little if the International side digs itself an early hole, like it has done every match since 1998. Nor does it help that, at least on paper, the Americans are an overwhelming favorite, with seven of the top 11 players in the world ranking sporting red, white and blue this week.

Even the potential American weaknesses seem mitigated by competitive reality. Jordan Spieth, a captain’s pick at 20 years old, has been the most consistent player regardless of nationality the last two months; and Steve Stricker, who failed to earn a point at last year’s Ryder Cup and played a limited schedule in 2013, sounded like he was ready to play another decade of team competitions on Tuesday.

“I would still like to think I've got a shot at making the Ryder Cup next year, especially the way I'm playing, and if I can continue to play the way I've been playing. And I would like to be a part of that again,” he said. “The way we left Medinah (site of last year’s Ryder Cup) was not a great feeling. So it would be nice to get one more crack at that.”

But if the Internationals are in need of a motivational tale they could find it at this year’s Solheim Cup. With a mixture of rookies and scarred veterans, the European team has won the last two matches after going 2-8-0 to start the series.

Compared to Nicklaus’ take, Day’s optimism is downright effusive. Whether it is misplaced or not remains to be seen.