It's getting late early 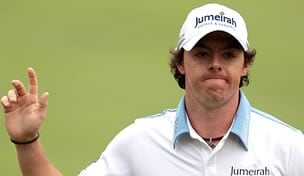 Not that the 22-year-old Northern Irish lad has lost anything, in fact there is no small collection of pseudo-clairvoyants who went to bed late Saturday thinking McIlroy had already won the 111th U.S. Open.

Lost in that hyperbole is this simple truth – they play all 72 at the national championship. The Congressional Open is not over but it’s getting late early, as Yogi Berra once famously reasoned.

“Lee (Westwood) paid last night, I paid the night before, which is fortunate because during the week they don’t drink much wine,” smiled Chubby Chandler, McIlroy and Westwood’s genial manager.

One can only imagine the dinner table chitchat between McIlroy – doing an uncanny stand-in for Tiger Woods at this week’s Open following rounds of 65-66-68 that pushed him eight clear of a rope-a-dope field – and Westwood, whose co-round-of-the-day 65 moved him into a tie for an arm’s-length third place.

Shame the Englishman lost his fascination with Twitter. Imagine the possibilities in a barrage of 140-character clips.

@LeeWestwood: “Suggested Rory try the oysters and sushi. It only looks a few days past expiration. LOL”

On and on it would go. Two of the game’s great personalities exposed at their jovial best. Instead, the consolation prize is an 18-hole sprint on Sunday to history or a historic collapse.

Either option is viable, although the latter is starting to appear about as likely as a stress-free commute in Washington, D.C.

He’s done it before, the pundits will caution. He was 4 up with 18 to play at the Georgia member-member this spring at Augusta National and ballooned to 80, they will warn. He was two clear after the first round last year at St. Andrews and signed for another 80, the crowd will reason.

Yet somehow McIlroy’s play for three muggy days makes those monumental miscues seem like a lifetime ago. You don’t lay 15 birdies, an eagle and just one bogey and a single double bogey onto a U.S. Open venue with your “C” game or a suspect swing.

We jokingly asked U.S. Open doctor Rees Jones his thoughts on McIlroy’s handiwork on his colossus-turned-cupcake layout: “If Rory would have gone to college everything would be OK,” he joked.

Instead, he’s taking all comers to school.

As Graeme McDowell made his way to the scoring room he glanced over his shoulder and gazed at the scoreboard adjacent the practice green – McIlroy 12 under.

“It's just phenomenal. You run out of superlatives to describe what he's doing this week,” said McDowell, whose 69 was solid but will be a footnote in Sunday’s editions back home in Northern Ireland. “He's decimating a field.”

They are calling McIlroy’s handiwork Tiger-esque and comparing this year’s national tilt to that historic gathering in 2000 at Pebble Beach. McIlroy led by six through 36, just like Woods; and his eight-shot advantage over Y.E. Yang is just two shy of Woods’ lead through three rounds. Many believed Woods’ 15-stroke walkover was an unbeatable benchmark. Through 54, however, the only thing that appears untouchable is McIlroy.

Not that Congressional is a complete carbon copy of 2000. To date, McIlroy has 19 fewer PGA Tour victories and two fewer majors than Woods had when he romped at Pebble Beach.

Yet of all the false heirs the media has anointed over the years McIlroy certainly has the tools – length, precision, touch, demeanor and, most importantly, belief.

“He said he was going to win several majors and he believes that,” said Jason Day, who was a playing patron of McIlroy’s for the first three days this year at Augusta National and will begin the final turn nine shots back.

Not even an unfriendly forecast or an overly friendly setup could help narrow a gap made mountain-like by McIlroy’s workmanlike effort. The U.S. Golf Association moved up tees, cut pins in pincushion landing areas and laid Congressional bare to all in an attempt to give the masses a chance to run down Rory.

“That was their goal but the wrong guy shot 6 under (3 under, actually),” Robert Garrigus said. “The only way there’s going to be a tournament is if he does what he did at the Masters and I don’t think he’s going to do that.”

McIlroy said the right things – sports cliché stuff like taking it one shot at a time and he hasn’t accomplished anything yet. All week, in fact, his play in the press room has been nearly as flawless as his on-course performance.

“The more I put myself in this position, the more and more comfortable I'm becoming. I thought today would be a really good indication on how I was going to fare over the whole weekend,” he said.

There are no guarantees when vying for sport’s greatest championships, McIlroy needs to only ask his texting buddy LeBron James about the ills of a three-quarter effort.

For McIlroy, Sunday’s ultimate task will be dealing with the demons of Augusta National, more so than a golf course on the softer side of par or a leaderboard with plenty of pedigree. If he needed proof of that he should look no further than the other side of Saturday’s dinner table.

Westwood began the final round in 2008 at Torrey Pines a stroke behind Woods, signed for a closing 73 and watched Monday’s fireworks from his couch like the rest of the golf world.

Heartbreak has no shelf-life and this U.S. Open is not over, but it is getting late early.