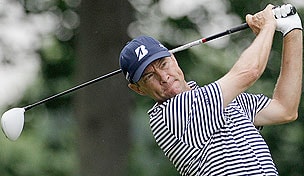 Getty Images
CHARLOTTE, NC - MAY 01: Scott McCarron reacts to a putt on the 17th green during the third round of the Quail Hollow Championship at Quail Hollow Country Club on May 1, 2010 in Charlotte, North Carolina. (Photo by Richard Heathcote/Getty Images)  -

BETHESDA, Md. – Deep into his preparation for the 111th U.S. Open late Wednesday afternoon Davis Love III paused and his eyes widened, “Take a look at this,” he gushed as he quickly flipped to a picture on his iPhone.

Atop a paddle board, Love’s second or maybe third love, are two children and a dog. “A friend just bought it. It’s great,” he smiled widely.

Maybe someday Love will slow down enough to allow a doctor to officially diagnose him with Attention Deficit Disorder. Until then it’s best to categorize him as “Type A” and leave it at that.

But then that’s nothing new. In 21 Open starts he’s finished inside the top 6 five times, including last year’s tie for sixth that may have been the toughest of all his near misses at the national championship.

“Last year I felt like I had a great chance to win and just kept making doubles that killed me,” said Love, who played his last seven holes at Pebble Beach in 3 over including a double bogey at the 17th hole.

In 1997, the last time the Open was played at Congressional, he tied for 16th place, but that doesn’t begin to explain how the 47 year old found his way into the windy mix on Thursday. No, that goes back to this year’s Ryder Cup announcement and later to a conversation with his son, Drew.

In the strongest terms, Love is a reluctant captain – honored to have his turn at the helm but, some would say, stubbornly optimistic he could take one final turn inside the ropes at the biennial grudge match.

“He wants to play on the Presidents Cup team and the Ryder Cup team,” Love’s manager and longtime friend Mac Barnhardt said on Thursday. “This is the most enthusiastic about his golf game that I’ve seen in a long time.”

But then Love always worked hard, betrayed on some level by a calm exterior that was sometimes mistakenly interpreted as indifference, and his ballstriking is better now at 47 than it was at 27. It’s always been a suspect putter, not the pace of time, that has held him back.

“If he putts good, not great, just good he’s got a win this year,” reasoned Barnhardt. The statistics support his claim.

Drew Love, 17, finally took on the elephant in the room earlier this year, suggesting his father try a belly putter, which he did, albeit briefly. The belly putter didn’t stick, but the concepts did. If Thursday’s 31-putt effort doesn’t exactly sound Ben Crenshaw-like when compared with his season average it is progress by any measure.

His 1-under card was his best opening effort at the national championship in more than a decade (1999) and, for better or worse, promises to only fuel Love’s desire to avoid his golden years.

For Love golf has become a race against a clock that began with so much promise. He turned pro at 20, had seven Tour titles before his 30th birthday and a major before he was 35.

But somewhere along the road all that progress turned to an impasse. Victories came, 20 and counting, but the big events, the events that mattered the most, continued to stay just out of arms reach, including runners-up in 1995 and ’99 at the Masters followed by another in ’96 at the U.S. Open.

When he arrived at Congressional this week he was officially on the clock.

“I was a little jumpy when I got here but experience helped calm me down,” he said.

Maybe this time will be different. For the first time since 2007 he’s already exempt into all four majors and with the specter and pressures of next year’s Ryder Cup looming this may be his last, and best, chance.

For the man that always had time for golf and life, the countdown has begun and Congressional could be his line in the sands of time to add one more title to that metaphorical business card – U.S. Open champion.