Magic is gone with no more Disney Tour stop 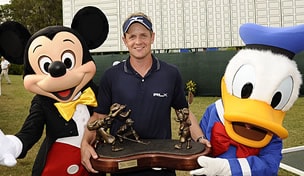 Getty Images
A fan in presidential costume watches the play during a practice ground prior to the start of The Presidents Cup at the Muirfield Village Golf Club on October 2, 2013 in Dublin, Ohio. (Photo by David Cannon/Getty Images)  -

Each fall for the better part of a half century it was an ominous subtext to what almost always turned out to be an eventful week. Down-on-their-luck PGA Tour types would arrive at the house that Walt built perched precariously on the circuit’s money precipice.

Some, like lemmings, would tumble over the edge. Others, like Jimmy Walker in 2009, would pull off the last-minute money grab and keep their Tour cards.

But that theater ended last fall. Depending on who you ask, the Tour’s annual Disney stop – a staple since 1971 – was either a victim of the FedEx Cup era or a change of heart by the resort’s keepers.

Wherever the truth lies this much is certain, the Tour’s move to a split-calendar schedule was the final straw for Mickey & Co. Full FedEx Cup points and a Masters invitation come with a cost and for the fall events that meant bigger purses for only slighter better fields.

When Charlie Beljan putted out for an emotional victory last year at Disney it marked the end of an era for the event that had the same number of title sponsors (five) as it had decades on the Tour lineup.

Although the Disney stop was played at various times on the Tour’s fall schedule, this week marks as good a date as any to eulogize the event’s demise. Twenty-three out of the 42 Disney events ended on the third week of October, and 12 of the last 17. Not that one would have noticed the sentimental passing on Wednesday.

Instead of courtesy cars and spectator shuttles, the parking lot adjacent the pro shop that serves the Palm and Magnolia courses was filled with mini-vans and dusty SUVs from across Americana, from Wisconsin to North Dakota.

Instead of Tour pros looking to take one final swing at the fences, tourists filled Wednesday’s tee sheet.

“Not bad,” said the golf bag attendant named Arnie when asked if they were busy.

That is not the same Arnie, by the way, who recently reworked the Palm course. That would be Palmer, and the little-sister of the two layouts is scheduled to reopen by early December with a fresh new look and Oakmont-like bunkering.

In fact, the only sign that the property had ever been such a recognizable part of the Tour landscape is a scoreboard that still looms over the practice putting green that reads “Children’s Miracle Network Hospitals Classic,” the tournament’s final calling card.

“We were fortunate not to worry about keeping our Tour card each time, and I would fly my brother in with his family and he would caddie for me and for them to have the run of the park was a dream,” said Kevin Streelman, who won the $1 million Kodak Challenge in 2009 at Disney and missed the event just once since joining the Tour in 2008. “That tournament meant a lot to the families.”

Luke Donald never had to endure the season-ending money grind at Disney to keep his card, but he did need a walk-off victory in 2011 to claim the money title, becoming the first player to win the cash crowns on both the PGA Tour and European circuit.

“It is a special place,” Donald said. “But you can’t take too much away from (Tour commissioner) Tim Finchem and the PGA Tour with the amount of events we get to play, but unfortunately (Disney) went away.”

In this, the Disney stop enjoyed an embarrassment of riches. Each year the event provided equal doses of heroics and heartbreak, from Beljan’s dramatic victory last year following a surreal trip to the hospital in an ambulance on Friday with a mysterious heart condition to Walker’s closing 69 in ’09 to tie for 15th place and finish 125th in earnings by $2,997.

But on Wednesday there was none of the quiet tension that characterized Disney week. No mind games by desperate Tour pros who would say the Disney stop was, “just another week,” but knew that was a lie.

Instead, a foursome from England set out just before lunch without a care in the world. No grandstands, no volunteers, no drama. As they headed down the Magnolia’s first fairway, a train whistle from one of the park’s rides echoed through the oaks and palm trees.

It was a familiar sound for any Tour pro who ever came down the stretch at the Disney stop in search of answers and maybe even a little occupation salvation. It was always as clear as if Johnny Cash himself was belting out the classic line from “Folsom Prison Blues.”

I hear the train a comin'

It's rolling round the bend

And I ain't seen the sunshine since I don't know when

Time marches on at Walt Disney World, just without the Tour and all that theater.