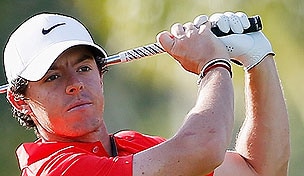 Getty Images
PALM BEACH GARDENS, FL - FEBRUARY 27: EDITORS NOTE: Polarising filter used on this image - Jimmy Walker of the United States plays his tee shot on the par 4, second hole during the third round of the 2016 Honda Classic held on the PGA National Course at the PGA National Resort and Spa on February 27, 2016 in Palm Beach Gardens, Florida. (Photo by David Cannon/Getty Images)  -

DORAL, Fla. – Behind the polish and the power of his swing, just beyond the inviting smile and immense talent, Rory McIlroy is nothing more or less than a 24-year-old.

Sure, he’s a 24-year-old with two major championships and a multimillion-dollar endorsement deal, but beyond the resume and the immense retirement plans he is still a young man just trying to find his way in an unforgiving game.

Never has that truth been more evident than during the Ulsterman’s last two trips to the Honda Classic. In 2013, McIlroy limped off property on Friday with a toothache and severely bruised ego. Last week at PGA National he simply limped off.

By all accounts, McIlroy should have won on Sunday. He led by two strokes going into the final round and was three shots clear when he made the turn. But things unraveled, slowly at first with a bogey at the 12th hole, then in waves with a double bogey at the 16th and a bogey at No. 17.

The world No. 6 rallied to join the playoff with Russells Henley and Knox and Ryan Palmer with a clutch 5-footer for birdie at the last, but the damage had already been done.

Players of McIlroy’s caliber don’t spit up three-shot leads with seven holes to play. Players with multiple majors know how to close out events even when faced with a pesky right-to-left wind. Players who are mentioned in the same breath as Tiger Woods don’t blink in a playoff.

Yet lost in all those generalities is the simple mathematics of age. At 24, McIlroy is still learning how to win and, more importantly, how to deal with the emotions of a Tour Sunday.

“I maybe just didn’t make as committed swings as I should have at some points during the back nine,” McIlroy allowed. “But I know that, and if I get myself into that position again this week, I’ll try and do a better job of seeing my shots and making more committed swings.”

It is an effortless-enough trap to fall into. When you’ve watched the Northern Irish phenom win two majors by a combined 16 strokes it’s easy to forget that, at least in theory, his prime is still a decade away.

It’s even easier to dismiss the idea that despite all the accolades and accomplishments McIlroy still has plenty to learn, like he did on Sunday.

Even Jason Day, at the grand old age of 26, could relate to the trial-and-error realities of winning on the PGA Tour and Rory’s rough Sunday.

“I know exactly how they are feeling. Sometimes you feel like you just want to curl up and run away. Some days you go out there and you feel like you can stay out there forever and play golf and it doesn't matter what golf course is in front of you,” Day said.

“It's not easy to win. You guys have been blessed by seeing Tiger Woods win for so many years and being No. 1 for I think 12 years now that people in general think it's easy to win. It's hard.”

Perhaps the hardest part is that there is no Sunday substitution.

It’s a testament to McIlroy’s resilience that he took an a la carte approach to his Sunday swoon at PGA National. While his inability to hold shots up against a right-to-left wind was troublesome, his last-minute haymaker in regulation to join the overtime was enough to mitigate the lingering ills of losing.

“If I think back to last Sunday all I have to do is think about that 5-wood into (No.) 18 and it puts a smile on my face and go from there,” McIlroy said.

The glass-is-half-full approach has served McIlroy well in his young career. Twice since turning pro he has endured varying stages of a slump, most recently in 2013 when he managed just one top-10 finish over his last eight Tour starts.

It was a similar story in 2012 when he missed three cuts and tied for 60th at the Open Championship before lapping the field at the PGA Championship. But then a long-term memory can be an occupational hazard for any professional golfer, which is the high road McIlroy took on Wednesday at Doral.

“I was disappointed with how I played coming down the stretch. It obviously wasn’t what I would have liked,” he said. “But plenty of positives . . . it was my third stroke-play event of the year and third chance to win. If you keep giving yourself those chances then hopefully you learn from the mistakes.”

Considering everything McIlroy has yet to learn he has adopted one of the game’s most important lessons – don’t be too hard on yourself.