Merion again? Yes, but without the severe setup 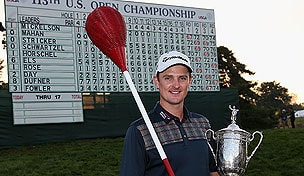 CROMWELL, Conn. – Zach Johnson, who became the standard-bearer of player discontent when he criticized the USGA for how they set up Merion, didn’t blink when asked on Tuesday if the U.S. Open should return to the East Course.

During an extended conversation with three prominent PGA Tour players in the TPC River Highlands locker room later on Tuesday, that sentiment was echoed.

That’s not to say the field for last week’s championship was enamored with how the East Course was set up. In the years leading up to this year’s championship, the classic layout was altered, some would say dramatically, with fairways (like the second and 11th) shifted some 30 yards or more toward either out of bounds or water hazards, rough was grown to pre-Mike Davis heights and pins tucked in insanely difficult spots.

The best example of that came on Sunday. In 1981, the last year the Open was played at Merion, there was just a single hole cut four paces or fewer from an edge and according to various sources the greens were rolling at 10 on the Stimpmeter when David Graham won that year.

For Sunday’s final turn, there were nine holes cut four paces or fewer from the edges and the greens were “stimping” at a fiery 13 ½ feet.

Lost in last week’s reintroduction of Merion after a 32-year hiatus from the U.S. Open rotation was the fact that this was not the same course where Bobby Jones completed the Grand Slam in 1930 by winning the U.S. Amateur or where Ben Hogan made emotional history at the 1950 U.S. Open.

Davis, the USGA executive director who took over for Tom Meeks as the Open’s top setup man in 2004, has proven himself adept at setting up fair, but difficult golf courses. This time, however, he may have blazed through a few stop signs on his way to Sunday’s trophy presentation.

Normally one of the calmest heads in the room, Davis – like many of us (your scribe included) – may have gotten caught up in the hype.

Conventional wisdom was that at just 6,996 yards, Merion would not withstand the power of the modern game and estimates varied between 8 and 16 under for a winning total. Essentially, if last week’s field picked poor Merion apart it would be the USGA’s tacit acknowledgment that the game had passed the venerable venue by, and that just wouldn’t do.

Davis told anyone who would listen last week that score never enters the conversation during the setup process, yet watching the world’s best battle their way to over-par totals (winner Justin Rose finished at 1 over) during a relatively benign week scoring-wise makes one think that when they say it’s not about protecting par, it’s always about protecting par.

The rub for most players, however, is that the USGA didn’t have to fly so close to the setup sun to protect Merion. Had officials maintained traditional fairway corridors and used slightly more accessible hole locations the winning score may have dipped to 8 under, but is that really a bad thing?

It’s worth noting that Merion superintendent Matt Shaffer told Golf Channel in May that the club will put the East Course’s fairway corridors back to where they were originally after the Open.

Merion proved to be the timeless maid we all thought she would be without the preemptive nip/tucks, so much so it should be a case study for any golf course architect who is tempted to build a 7,600-yard behemoth. Length and difficulty can be very much mutually exclusive when it comes to golf course architecture.

Thanks to creative planning, and an extremely accommodating membership and surrounding neighborhood, Merion also proved to be up to the logistical challenges of a major championship.

“Logistically, it was incredibly difficult,” Rose said. “They must have faced so many challenges. I think it would be fantastic to see it with better weather earlier in the week, to see it with a little bit of a bounce in the ball, to see how that would change the way it played.”

Should the U.S. Open return to Merion? Of course (may we suggest 2030, the 100-year anniversary of Jones’ historic win). Should the USGA tread a little more lightly with its setup when/if that happens? Absolutely.