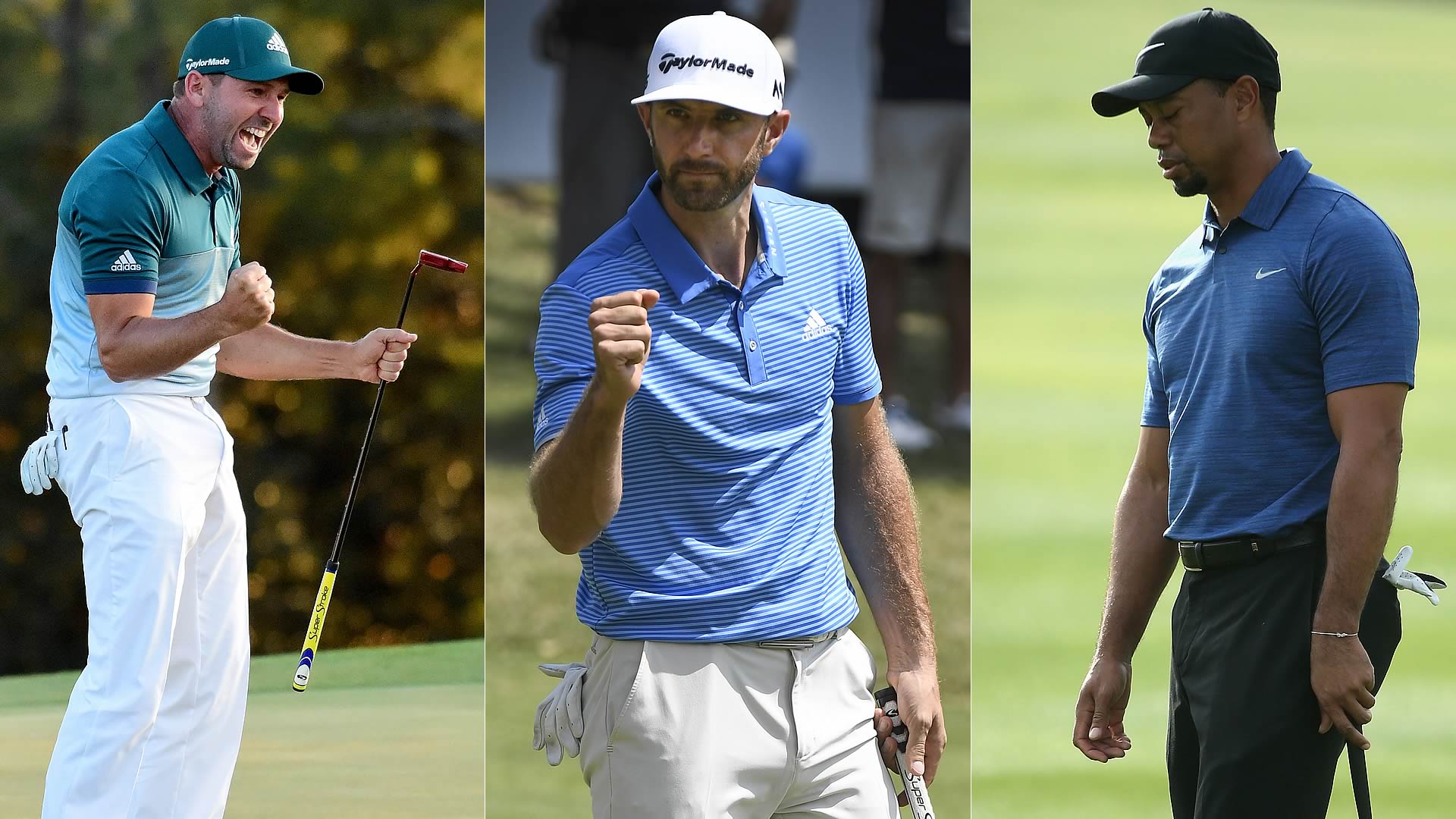 The major championship season may have just gotten underway and the calendar is still littered with several decisive events, but this week’s Valero Texas Open, the 24th of 47 events, is the official turn of the 2016-17 PGA Tour season and time for the annual mid-term update.

España, A+. On what would have been the 60th birthday for Seve Ballesteros, Sergio Garcia ended almost two decades of major misfortune with his playoff victory over Justin Rose at the Masters.

As if that wasn’t enough to earn Spain high marks, Garcia has been joined on the world stage by fellow Spaniard and first-year Tour player Jon Rahm.

Rahm won in just his fifth start as a Tour member at the Farmers Insurance Open, and dropped close decisions to Dustin Johnson at the WGC-Mexico Championship and WGC-Dell Technologies Match Play. The most-recent Spanish Armada has arrived.

Justin Thomas, A. JT’s repeat performance in this year’s #SB2K17 trip to the Bahamas is certainly a reason to celebrate, but it’s Thomas’ play that’s truly impressed this season.

Before this season Thomas was better known as Jordan Spieth’s buddy, but the 23-year-old proved to be so much more with three victories in his first five starts of the season, including a clean sweep of the Hawaii swing.

Although Thomas has cooled since his torrid start, he has emerged in 2017 as a bona fide world-beater.

Jay Monahan, A-. Officially, Monahan took over as commissioner of the Tour in January, but he’d been handling the day-to-day operations for some time and almost immediately settled in to the corner office in Ponte Vedra Beach, Fla.

Dubbed by many as a forward-thinking and dynamic leader, Monahan has shown his progressive side, like the introduction of next week’s team event in New Orleans, and he has been clear that he’s looking to dramatically rearrange the schedule in order to end the season on Labor Day.

That’s not to say there isn’t room for improvement. Two World Golf Championships in four weeks earlier this spring impacted fields from Innisbrook to Bay Hill, and continued scheduling conflicts with the European Tour need to be addressed. But those ongoing concerns aside, Monahan’s first 100 days have been impressive.

Rules of Golf, B+. This may not be a popular take given the ongoing rules snafus (see Thompson, Lexi 2017 ANA Inspiration), but the USGA and R&A have actually had a relatively good year.

Earlier this spring, golf’s rule makers unveiled a sweeping list of proposed changes and initiated a six-month feedback period. Among the proposed “modernizations,” are relaxed rules regarding penalty areas and putting greens and a focus on pace of play.

“We embraced these things because people said to heck with the rules,” said Mike Davis, the USGA’s executive director and CEO. “What this has done is gotten people thinking about the rules, and that’s a good thing.”

Golf still has plenty of room to grow on the rules front, but the proposed changes are a good start and by all accounts the current discussion is just the beginning of a fundamental overhaul.

Dustin Johnson, B+. This might seem a tad nitpicky, but the standard for DJ has escalated in recent years.

Johnson won three consecutive starts heading into the Masters, overtook Jason Day at No. 1 in the world and began the week at Augusta National as the easy favorite only to be sent to the disabled list when he injured his back on the eve of the first round.

He’s scheduled to return to the Tour in two weeks at the Wells Fargo Championship, but the real test for Johnson will come at the U.S. Open in June and at the remaining majors.

Tiger Woods, C. Let’s call this grading on a scale. Woods’ grand return ended after just 54 substandard holes and he missed the Masters for the second consecutive year, but there’s no denying the effort.

Maybe his schedule to begin the season was too aggressive, with back-to-back starts in San Diego and Dubai, but the frustration among Woods’ fans has only grown in recent weeks and this current setback appears to be more concerning than simply back spasms.

“I have good days and bad days,” Woods said on Tuesday at Big Cedar Lodge. “I’ve had three back operations, and that’s the nature of the business unfortunately. That’s all I can say.”

Notah Begay III suggested two weeks ago that Woods could return in time for the U.S. Open, which seems overly optimistic given his most-recent update. But right now optimism may be all Tiger has.

Speed control, D. In the annual review of driving distances published by the USGA and R&A in February those charged with keeping tabs on such gains noted that there has been a “slight uptick” in how far current professionals are hitting the golf ball.

Using data collected from five world tours, “between 2003 and the end of the 2016 season, average driving distance has increased by approximately 1.2 percent, around 0.2 yards per year.”

Whether these distance gains are a real problem is an entirely different conversation and statistically driving averages seemed to have ebbed, but there is no ignoring the fact that long-hitters are now the norm, not the exception.