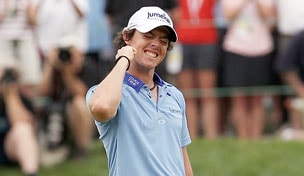 BETHESDA, Md. – In a town that has a history of getting ahead of itself uber-agent Chubby Chandler wasn’t taking any chances early Friday when a well-wisher offered him a wildly premature attaboy for his client Rory McIlroy’s historic performance at the U.S. Open.

“Oh no, it’s a long way from being over,” Chandler cautioned.

Forty-eight hours and 36 storybook holes later the thought occurred that McIlroy may just be getting started.

Moments earlier Chandler had received a text message from another one of his major-totting clients Louis Oosthuizen: “Does he think the 10-shot rule means he plays by himself?” No, it only seemed that way on a wet and wild weekend at Congressional.

But then McIlroy made it easy to get carried away. One by one players marched past the apartment-sized leaderboard adjacent the Blue Course’s 18th hole transformed from competitors to lookie loos playing bit parts in a show the game hasn’t seen since . . . well, 2000.

The dizzying pace of April’s Masters, when eight players held at least a share of the lead on Sunday, gave way to the clinically cold certainty that was the 111th U.S. Open.

The Northern Irishlad dusted off more history than a Harvard professor. In order:

-His 11-under total on the par 4s was the lowest ever.

On and on it went, yet McIlroy’s greatest achievement at Congressional will never show up in the history books, lost amid the blur of his statistical and scoring brilliance was a gutty resilience and an unmistakable answer to a question few others could have mustered enough moxie to answer.

For the record, his closing 69 was just 11 strokes better than that grisly 80 he penned on Sunday at Augusta National, but it may as well have been a 111-shot improvement.

Final-round 80s don’t just wreck tournaments, they have the potential of sinking careers. On Sunday at the Masters there was nowhere for McIlroy to hide. At Congressional he didn’t need to, buoyed by an iron game that found an un-U.S. Open-like 62 of 72 greens in regulation, the most since the USGA began tracking GIR.

By the time McIlroy birdied the par-4 fourth hole on Sunday he was a 10-spot clear of the field, with Steve Sticker the only mover from the too-little-too-late set. When his tee shot at the white-knuckle 10th pitched past the hole and eased back to within 6 inches for a tap-in birdie he was 8 up with eight to play – dormie.

The last person to leave Congressional please turn off the SubAir.

Like that it was match play, with McIlroy 2 up on his Masters’ demons and cruising. But then he knew it was always going to come to that regardless of his cushion or a glaring lack of contenders.

Congressional may have been an “Open Lite,” as some opined, softened by an imperfect storm of hot, dry conditions before the championship and a steady stream of showers during the proceedings, but history detests asterisks.

USGA executive director Mike Davis wanted 14 on the Stimpmeter, not the leaderboard. Instead he got something closer to 12 and 16 (under), respectively.

“I don't think we're going to try to trick Mother Nature. This is what we got in 2011. You come to the U.S. Open in the District of Columbia or in Maryland in June, that's the dice you roll, and that's what we got,” said Tom O’Toole, the chairman of the U.S. Golf Association's championship committee. “We ended up with a soft golf course.”

It was not the test the USGA wanted, but that does not lessen the enormity of McIlroy’s accomplishment.

So much so that comparisons with Woods’ 15-stroke walkover in the 2000 Open flooded the humid hills. McIlroy was the first wire-to-wire major champion since Trevor Immelman at the 2008 Masters and the first to do it at the U.S. Open since Woods at Pebble Beach. That’s just the tip of the similarities between the bookend Open masterpieces.

McIlroy led by six through 36 holes, same as Woods, and eight through 54 holes, two less than Woods; although his eight-stroke margin of victory was seven shy of Woods’ record romp.

To clarify, McIlroy’s effort was Tiger-esque, Tiger-like even, yet from great victories come greatly exaggerated expectations. Although he looks every bit the heir apparent, even in Sunday’s late gloom the 22 year old emerged as the coolest head.

“It is nice people say he can be this or he can win 20 majors, but at the end of the day I have one,” McIlroy said.

For Trivia Pursuit purposes, Jason Day won the “B” flight, closing with 68 to post his second consecutive Grand Slam runner-up and his third straight top 10 in a major.

If McIlroy’s major climb had a road-map-to-greatness look to it, top-3 finishes in five of the last eight Grand Slams, Day’s is beginning to take on a similar shade, albeit at arm’s length at Congressional.

It’s an enigma Phil Mickelson can relate to. Lefty talked like a man poised to break an inexplicable Open schneid, but showed up with a three-quarters swing and never was part of the conversation. He’s is now 0-for-21 in the national championship and running out of time.

That’s baggage McIlroy will now never have to shoulder, a conclusion that seemed inevitable even after that unsightly 80 in April. Late Sunday night following that fateful final round at Augusta National McIlroy, Westwood and Chandler were gathered around the kitchen table at the team’s house when fellow Northern Irishman David Feherty broke the silence.

“I asked him Sunday night of the Masters and I explained to him the thought process I had, what I was thinking, and that I didn’t want it (a major). I said, ‘I can see that you do,’” Feherty said. “He was right back at me, ‘I want it more than you can imagine.’”

Little did any of them know that he would get it sooner than anyone could have imagined.