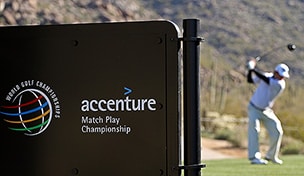 There will be a WGC-Match Play Championship on the schedule in future, that much seems certain.

Where the World Golf Championship will be played, what kind of format will be used and whether professional golf’s version of March Madness will grace the 2014-15 schedule, however, remains a mystery.

Last week at The Players, PGA Tour commissioner Tim Finchem was asked about the event’s status and his answer was telling in that the circuit seems no closer to reviving the event now than it did in February when Jason Day outlasted Victor Dubuisson in what was thought to be Dove Mountain’s swan song as the host venue.

“We are not yet ready to announce anything and are trying to have a decision by the end of May,” Finchem said last week. “It’s been taking a little longer than we thought.”

Even more telling was a meeting the Tour had with various player managers last week at TPC Sawgrass when the topic of the wandering World Golf Championship was addressed.

Numerous managers have told GolfChannel.com that the chances of the event being played next year are slim, and a review of the Tour’s tentative 2014-15 lineup reveals that there is no room on the docket until after The Players.

Because next year’s Hyundai Tournament of Champions ends a week later than it did this year (Jan. 12), all of the spots on the calendar are accounted for through the West Coast and Florida swings, with the first open date May 14-17 a week after the circuit’s flagship event at TPC Sawgrass.

The Tour also seems to be running out of time if they are going to work the championship into next year’s lineup.

“We did the Presidents Cup in ’94 in four months. We got it done, but it’s hard work,” Finchem said in February at Dove Mountain, which has hosted the Match Play since 2007. “You want more time to be in the marketplace and prepare.”

The Tour’s primary issue has been landing a new corporate sponsor after Accenture announced it would not be renewing its contract to sponsor the event, which requires an estimated $12 million annual investment.

That kind of cash thins the field for potential sponsors, which has prompted the circuit to re-examine the format for the event, which has used a traditional, 64-man, single-elimination format since it was first played in 1999.

Among the options discussed at last week’s meeting was the implementation of 36 or 54 holes of stroke play qualifying beginning on Wednesday and then cutting the field to 16 or possibly eight players on the weekend to decide the championship via match play.

“(The Tour) said they are looking at formats that they can sell easier to hospitality and TV, especially on the weekend,” said one manager. “They also said (a format change) may be more attractive for players, but it’s all being driven by enticing a sponsor.”

The rub with the Match Play has always been the competitive reality that the game’s biggest stars could be bounced from the competition before the weekend.

Consider that Tiger Woods has been ousted in the first round three times and on three occasions he lost in Round 2, accounting for nearly half of his starts at the event. Similarly, Phil Mickelson hasn’t made it past Thursday in five of his 11 starts at the Match Play.

Giving players 36 or 54 holes of stroke play qualifying at least assures a sponsor a fighting chance that the marquee players won’t be busted before Friday.

The Tour also told the managers that it is considering a round-robin, double-elimination type format like the one used for the Volvo World Match Play on the European Tour, but that likely wouldn’t sit well with the players or hardcore fans.

Even George O’Grady, the chief executive of the European Tour, conceded it is not the purest form of golf and referred to it as a “bastardized” form of match play earlier this year.

Where the Match Play ends up is also a moving target. The Ritz-Carlton Golf Club at Dove Mountain was not well liked among the field – it ranked among the 10 worst courses on Tour in a 2012 Golf Digest survey – but last week Finchem indicated that a return to the isolated layout in Marana, Ariz., was not out of the question.

If the event is played later in the year, the week after The Players for example, warmer weather would give the Tour more options than it currently has in February.

But as officials in Ponte Vedra Beach, Fla., continue to scramble for answers to the Match Play mystery, any possible venue or format changes will be predicated on who steps in to fill the void left by Accenture.

In fact, the only certainty for the event is that the future of the Match Play will look much different than its past.