Newsmaker of the Year: No. 1: Tiger Woods 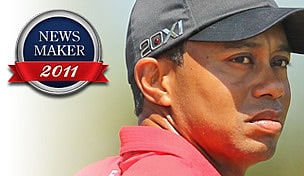 Tiger Woods is no stranger to media scrutiny but it is a sign of how little his Q rating has been impacted by his current competitive swoon that in 2011 he stepped to the press podium no fewer than 68 times.

Not surprisingly the most telling of those trips were bookend appearances that focused on where Woods was as a person more so than as a player. On Jan. 26 at his season-opener in San Diego he was asked if his love of the game had fluctuated during his most recent slump.

“Life goes on and life moves forward,” he reasoned.

Some 10 months later another scribe struck a similar nerve on the eve of the Australian Open in Sydney when he asked about racially insensitive remarks made by his former caddie Stevie Williams that were directed at Woods.

“Life goes forward and this is it,” he shrugged.

In many ways 2011 was a transition year for Woods, who failed to win an official-money event for the second consecutive season and plummeted outside the top 50 in the World Golf Ranking for the first time since he turned pro in 1996.

There were signs of progress – most notably his Sunday charge at Augusta National and year-ending victory at the Chevron World Challenge – and setbacks – his 5-over-par weekend at Torrey Pines qualifies as does his missed cut at the PGA Championship. But most of all it seemed as if Woods was finally ready to move beyond the self-inflicted shell that was 2010.

It was also a measure of Woods’ continued influence that those in his wake ebbed and flowed with the former world No. 1’s tide. Even those around Woods made headlines in 2011, most notably his caddie Williams, who was dismissed in July after 12 years and 13 major victories, and his manager Mark Steinberg, who split with IMG in May and joined Excel Sports Management a month later.

There was even a tree.

The famed Eisenhower tree along Augusta National’s 17th hole became “water cooler” fodder when Woods’ play from under the infamous pine in Round 3 resulted in another early exit from The Players Championship and another prolonged stay on the DL.

In total, Woods missed the better part of four months and, more importantly, two majors, as a result of knee and Achilles’ tendon injuries. He struggled when he returned – missing the cut at Atlanta Athletic Club to mark just the third time as a professional he’s failed to advance to the weekend at a major – and needed a captain’s pick to make the U.S. Presidents Cup team.

A poor-putting Saturday likely cost him the Australian Open title and he recorded the clinching point for captain Fred Couples at Royal Melbourne before closing out his year with his victory at the Chevron.

It’s best to rate Woods’ competitive calendar as an incomplete, another disjointed collection of starts and stops dotted with equal of amounts of promise and problems. Psychologically, however, there was progress. Or, as Woods would say, life goes forward.