Newsmaker of the Year: No. 8: Long putters 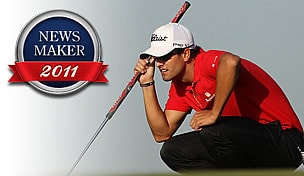 It is a measure of the long putter’s dubious place in the game that when asked if he would ever succumb to the unconventional charms of a non-standard length implement Gary Woodland, an old heart in a power-forward’s body, shrugged, “God, I hope not.”

There is no doubt that 2011 was the year of the long putter, but trying to separate the historical fact from the hysteria has become as slippery as a downhill 5-footer at Augusta National.

Like politics and the BCS, there is no middle ground in the long-putter debate. Converts cling to the simple notion that golf’s rules makers have dubbed long putters legal, while critics usually stop just short of the “C” word (cheating) and contend the U.S. Golf Association and Royal & Ancient Golf Club of St. Andrews should be penalized two strokes for letting the long putter cloud the competitive waters.

Adam Scott didn’t start the long-putter movement on Tour, but the Australian’s switch at the WGC-Accenture Match Play Championship and subsequent runner-up finish at the Masters qualified him as an original person of interest.

Curiosity turned to concern in August when players using long putters won tournaments on two different tours in four consecutive weeks. In order, Scott won the WGC-Bridgestone Invitational, Keegan Bradley became the first player to win a major with a non-standard length putter at the PGA, Webb Simpson won the Wyndham Championship and Fred Couples claimed his first over-50 major with a long putter at the Senior Players Championship.

A week later Phil Mickelson stunned the status quo when he quietly converted to a long putter at the Deutsche Bank Championship, an experiment that had ended by the time he arrived in Australia for November’s Presidents Cup but a telling sign nonetheless.

All total Simpson came up just short in his drive to win the FedEx Cup – losing to Bill Haas, another long-putter convert, in a dramatic finish at East Lake – and money title, and Bradley would collect the Rookie-of-the-Year Award to go with his two PGA Tour titles. It was all enough to make some wonder aloud if long putters, more so than supercharged golf balls and oversized drivers, were the real threat to the purity of the game.

“You're going to see junior sets sold in golf shops with an option of a belly putter or a short putter soon, which is disappointing,” Geoff Ogilvy said. “It's another step away from the game that's been played for 300 years. . . . But to me golf is two or three woods, irons, a wedge and a putter (and) the putter is the shortest thing in your bag. . . . I don't know, that's the ultimate romantic in me.”

Although there is plenty of anecdotal evidence to support the long putter’s growing influence in the game, the most telling sign of its importance could be found on the money list, the ultimate arbiter of success and failure. Eight of the top 25 players on the season-ending money list used a long putter in competition at some point in 2011, including No. 2 Simpson, No. 7 Haas and No. 11 Scott.

As the gulf between converts and critics expands the only certainty is that 2011 was the year of the long putter.