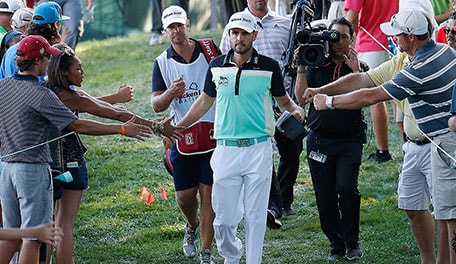 GAINESVILLE, Va. – We’ve seen this before, a salt-of-the-earth Iowan wielding a lethal putter on his way to a career defining victory.

The only thing missing was the modest monologue: “I’m Troy Merritt and I’m from Osage, Iowa.” But even that wouldn’t be Merritt’s style.

If Zach Johnson is the most understated two-time major champion, then Merritt is nothing short of the most unassuming Tour winner in recent memory.

A wisp of a player who is generously listed at 6 feet, 160 pounds, Merritt has never played in a major, never finished better than 100th on the FedEx Cup point list and would never be confused for one of his high-profile PGA Tour frat brothers.

Someone like, say Rickie Fowler, who seemed to be the consensus and crowd favorite on Sunday at the Quicken Loans National.

But Merritt never gave Fowler or anyone else much of a chance on his way to a three-stroke victory and maiden Tour title.

“It's been a long journey the last five, six years,” said Merritt, who closed with a 67 that included a winding 34-footer for birdie at the last that prompted an almost apologetic shrug from the 29-year-old.

“Several life changes, couple moves, two boys but I wouldn't have done it any other way. I separate my life pretty well and, as a result, it really hasn't paid off in success on the golf course but it's the way I'm doing it. I'm a family man first and foremost.”

The timing couldn’t have been better for Merritt, who began this week on the inward loop of a grueling run that has included five events in six weeks.

During that stretch he missed five consecutive cuts, broke par just once in his last 10 Tour rounds and watched hopelessly as he tumbled down the FedEx Cup point list all the way to 123rd.

It was a familiar feeling for Merritt, who has struggled since joining the Tour in 2010 after a stellar college career. Not that anyone around him could see the pressure building.

“Troy is one of the nicest guys to be around, period,” said his caddie Scott Sajtinac. “If you don’t get along with Troy, it’s probably you.”

The only thing that seemed different on Sunday at Robert Trent Jones Golf Club was the outcome, a victory that earned him a spot next week in the WGC-Bridgestone Invitational and the PGA Championship and secured his Tour card for the next two seasons.

From the pavement to the penthouse just like that thanks in large part to a swing tip from Sajtinac during Tuesday’s practice round. After struggling with his driver the last few months Sajtinac suggested he square his shoulders more to his target and move away from the golf ball at address.

“Off the tee it has been tough,” Sajtinac said. “We’ve been playing out of the rough for two months and that’s hard to do.”

Just ask Tiger Woods how hard that can be.

The technical term for it is “transference,” that’s swing speak for having the ability to take what a player is doing on the range and in practice and apply it during a round of tournament golf.

Throughout Woods’ steady competitive swoon the last few months he referred to the phenomenon as “old patterns,” but in the simplest terms it has been an inability to carry what he has on the range to the first tee.

What else would explain his third-round 74 after playing his first 36 holes in 8 under?

The tournament host would rebound on Sunday, playing his opening nine in 4 under on his way to a closing 68; and while his tie for 18th did little for his FedEx Cup fortunes, he moved up just 12 spots to 185th, the psychological impact was evident.

“This is much better, much, much, much better to have a round like today,” smiled Woods, who moved to within five strokes of the lead with a birdie at the 10th hole before playing his final eight holes in even par.

Woods’ optimism seems to go well beyond his best Tour finish since the spring when he tied for 17th at the Masters. While the short term – the PGA Championship could be his final event of the 2015-16 season – remains shrouded in uncertainty, after a few trying months he is starting to see well beyond the light at the end of the tunnel.

“I've got years ahead of me, that's how I look at it, not just this season,” he said. “I've got years and if you would have asked me that back when I had my back surgery I would have probably . . . I didn't really know. That was a rough period in my career and my life. But now I'm on the good side of it.”

The same could be said for Merritt, who began the day tied with Kevin Chappell and quickly separated himself from the field with a birdie at the first.

The event quickly descended into a two-player race, with Bill Haas moving into a share of the lead at 17 under with six birdies through his first 10 holes but he unraveled just as quickly, playing Nos. 12 through 16in 4 over par and tying for fourth.

Fowler made a late run with birdies at three of his last five holes, but Merritt nearly made a hole-in-one at the 16th hole for a tap-in birdie and he added his walk-off at No. 18 to complete his breakthrough.

In fact, Merritt’s biggest obstacle as he made his way down the 18th hole was the emotion of the moment.

As Merritt – who set up his Sunday charge with a tournament-record 61 on Day 3 – approached the 18th green, the crowd broke into a large cheer. When the fans quieted he told Sajtinac, “That was nice.”