No doubt about it, Bubba makes a statement at Riviera 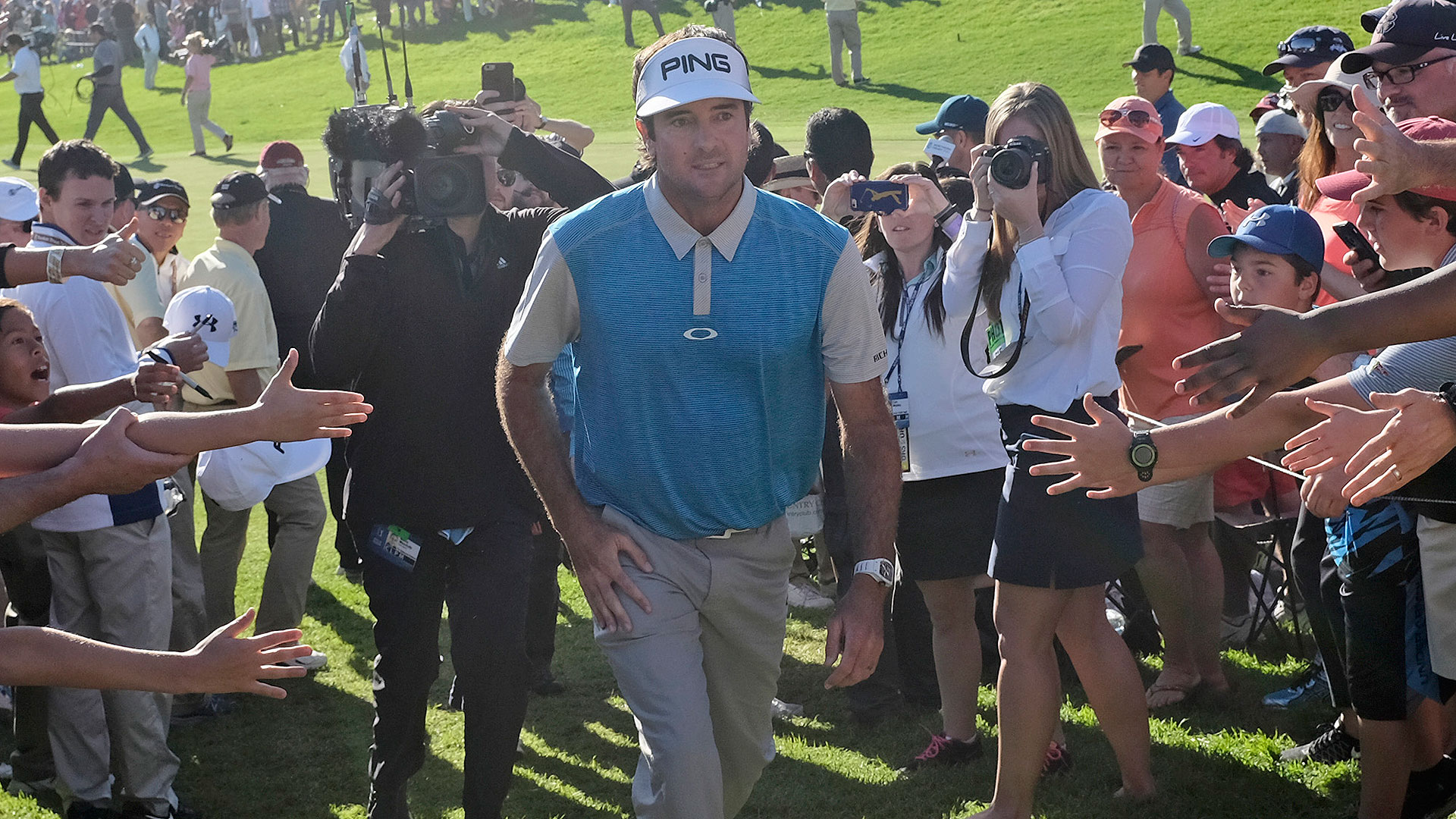 LOS ANGELES – For a guy who freely admits that he has all 158 episodes of “Boy Meets World” on his phone to watch during long flights, the headline writes itself.

Not that Bubba Watson needed another Hollywood ending at the Northern Trust Open to solidify his status as the PGA Tour’s most complex iconoclast, but his whirlwind tour of Tinseltown certainly fits with his celebrity narrative.

Last week Watson visited the set of Disney Channel’s “Girl Meets World,” a spinoff of the original series, for a cameo role in a future episode; and the set of the CBS sitcom “2 Broke Girls.” He spent time with Justin Bieber and sat courtside at the L.A. Clippers game on Saturday night. He passed a kidney stone.

And he emerged from a leaderboard as crowded as the 405 at, well, any time, to claim his second Northern Trust Open title in three years.

Even in L.A. that’s considered a good week.

“I get a good, excited feeling here,” said Watson, who ended Sunday where he began it, one stroke clear of the year’s deepest field, at least according to the Official World Golf Ranking, following a closing-round 68 that featured two birdies over his final three holes.

“I love coming here, the history of this place. You know, the history that you've seen, the great champions ... and a couple times in the last few years, my head's in the right spot and it's worked out.”

Not that this tale remained on script throughout a picture-perfect Southern California afternoon.

Adam Scott stormed out to a quick start with an eagle at the first hole and when he rolled in a 4-footer for birdie at the sixth to move to 15 under, one stroke clear of K.J. Choi, the Australian appeared poised to claim his second title at Riviera, and his first “official” bottle cap.

“I would like to have an official victory here. A guy like Bubba, he's very tough to beat,” said Scott, who won the 2005 Northern Trust Open but because it was shortened to 36 holes it is not considered an official Tour victory. “He's proving tough to beat from that position. He's wearing the course out on the toughest day.”

Scott stumbled with a double bogey-6 at the eighth hole and three-putted the 14th hole from 17 feet on his way to back-to-back bogeys, but he chipped in a 25-footer for birdie from the fringe at the last to move to 14 under and within a stroke of Watson.

It wouldn’t be enough with Watson making a routine par at the last to secure the title, but even without a bookend L.A. title it was still something of a mandate week for the Australian.

His play on Riviera’s greens may finally begin to quell questions regarding his putting after he finished the week ranked 15th in strokes gained-putting.

For all the handwringing over this year’s ban on anchoring and Scott’s long-term competitive outlook with a traditional-length putter, the irony wasn’t lost on Scott that he won his first title in L.A. using a short putter in 2005.

“I think I putted pretty good this week. I missed a couple today, but I'm sure heaps of people missed a couple today,” he said. “I feel like it's all in a really good spot. I'm excited about going into the Florida stretch and then getting to Augusta where I feel the greens are really the kind of grass that I like a lot and feel most comfortable on. I'm excited about what's coming up.”

Jason Kokrak held the lead for much of the day thanks to a bogey-free, 3-under opening nine, but a three-putt bogey at the 15th hole dropped him out of the lead and he was unable to birdie that par-5 17th hole after a wayward drive.

But then at least Scott and Kokrak were in the conversation late into Sunday afternoon. The same couldn’t be said for Rory McIlroy, who rocked the leaderboard early with a 23-footer for eagle at the first for a share of the lead, but the world No. 3 played his next 17 holes in 6 over par to tie for 20th place.

“I didn’t have the pace at all on the greens. Off the tee I was much better and that was one of the things I wanted to do,” said McIlroy, who was playing Riviera for the first time this week. “I felt like I played three solid rounds of golf. I turned a chance to win into a top-20.”

In true Los Angeles fashion, Watson turned his eventful week into a story of redemption and resilience.

Although Bubba’s always been something of a polarizing figure, he’d been typecast in recent weeks as a villain following a media miscue prior to the Waste Management Phoenix Open.

Whether it was his miscue or the media’s remains a topic of much debate, particularly for Watson.

Watson, who has never hidden his emotions from the press or public, said the fallout from that story has lingered well after he endured the slings and arrows of fans on Saturday at TPC Scottsdale.

“I'm not over it. It's heartbreaking that a city or community or local press would put a headline to spur on a bad image. So it's hurtful,” Watson said. “I'm pretty mad about it, but I've got to get over it. I've got to man up and be a better man, and with those comments, I've got to figure out how to answer things better, all the stuff going on in my head we've been working on.”

For Watson this was something of a Riviera redemption, a chance to put another difficult chapter behind him and improve, both as a player and a person. His victory shows progress for the former, but he openly admits the latter is a work in progress.

Considering his recent issues with the fourth estate, Watson was asked to write the headline for Sunday’s finish: “Bubba Loves This Community and People and Course and Fans and Everything Else,” he smiled.

Or if that’s too wordy, try "Bubba Meets World."