Not Out of the Woods 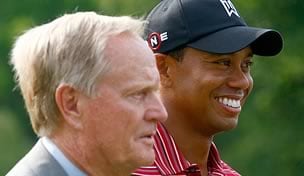 Getty Images
HUIXQUILUCAN, MEXICO - MARCH 20: Stacy Lewis of the USA watches her tee shot on the 11th hole during the first round of the MasterCard Classic at the BosqueReal Country Club on March 20, 2009 in Huixquiucan, Mexico. (Photo by Scott Halleran/Getty Images)  -

DUBLIN, Ohio – From Jack Nicklaus’ vantage point there is, at least as it applies to Tiger Woods’ dogged pursuit of his major championship record, nothing to see here.

On Tuesday during his annual, and infinitely informal, “State of the Golden Bear” address to the media, the Memorial host, homebody and historic benchmark was asked if he thought the fans were writing Woods off too early.

“That’s ridiculous,” he grimaced. “The fans aren’t, it’s the media. The guy is injured. He’s hurt and hasn’t been able to play. It all gets pushed so far.”

If the media, and maybe the game in general, has taken to feeling like the sky is falling when it comes to Woods, consider Nicklaus a sunny optimist, a man who lives in a place, Columbus, Ohio, where the sky may actually be falling following a particularly wet spring and the Monday resignation of Ohio State head football coach Jim Tressel.

From Nicklaus’ perspective, and based on each players’ major milestones, Woods is right on track to match and perhaps surpass the Golden Bear’s record of 18 major championships.

Nicklaus won his first major at 22, his last at 46 – the golden years, if you will – and when he was 35 years old, Woods’ current age, he had won 14 Grand Tilts, the same number that Woods currently holds.

The difference, of course, is that Nicklaus was considered a “young” 35, while Woods has looked AARP-ready in recent years. Earlier this month he limped to a front-nine 42 and withdrew from The Players Championship a year after bolting early from TPC Sawgrass with a neck ailment.

By comparison, Nicklaus said he withdrew from two PGA Tour events – the 1980 World Series of Golf and 1983 Masters – because of injury his entire career. Woods has had four surgeries on his left knee, while Nicklaus avoided the scalpel until he was 44, to repair a tennis-damaged left knee, no less.

They may be at similar sign posts on the road to 18, but there is no escaping the fact that Nicklaus was healthy and happy, by nearly all accounts, for the downwind run of his Hall of Fame career.

Nicklaus won two majors in 1975, the year he turned 35, but, as Woods is learning, the last four are always the hardest. Nicklaus needed 40 more Grand Slam starts to land his last major at the 1986 Masters.

In fact, Nicklaus was stuck on 17 for 20 majors, from the 1980 PGA to the ’86 Masters, the second longest Grand Slam drought of his career after a 12-major slide that ended at the 1970 British Open. Woods’ longest is his current 0-for-10 slide that started after the 2008 U.S. Open – even though he did not play in the '08 British Open and PGA Championship due to injury.

So if Nicklaus sounds more bullish on Woods’ chances than the mainstream consider it the voice of a singular perspective. The ground the two cover is exclusive territory, and no one knows it better than Nicklaus.

Yet the optimist is also every bit the realist. Nicklaus quickly admits he was “lucky” in his career at avoiding the DL, but he had a different swing during a different time.

“My swing never caused an injury for me. I think Tiger's swing, and I think a lot of the swings of today, are far more violent at the ball than some of the old swings,” Nicklaus said. “The game today is far more an upper body game, and we used to play more from the ground up.”

Following Woods’ ’08 Open victory at Torrey Pines and subsequent knee surgery Nicklaus offered him some unsolicited advice, “I thought he was having a problem getting his weight to his right side.”

A year later Nicklaus was paired with Woods during a Wednesday Skins Game at Muirfield Village and “It was the best I’d ever seen him swing. He was getting to his right side.” Woods won his fourth Memorial title that week with a tee-to-green clinic, hitting 49 of 56 fairways and 53 of 72 greens in regulation on the season’s third-toughest non-major course.

Maybe it’s an intimate knowledge of the subject matter, or the man. Either way, the only player who knows what it takes to get to 18 majors has little interest in declaring the game’s most meaningful benchmark safe. And why should he?

It’s what Woods – who will have 42 majors, not counting next month’s U.S. Open, to play before his 47th birthday – alluded to last week when asked his chances of catching Nicklaus.

“It took Jack over what, 24 years, 23 years to do what he did. It takes time. I still have plenty of time, and I feel that going forward I'm excited about playing major championships and playing golf again,” Woods said.

Maybe adversity is part of the process. Is it storybook or historic if the walk appears, at least outwardly, effortless?

Nicklaus may have avoided major injury in his historic career, but he did deal with his share of adversity. There were the chipping yips in 1979 and, even worse, a loss of motivation at 39. Each time he changed his technique and his take on life and each time he overcame. Maybe that’s what Nicklaus sees in Woods, a kindred competitor who craves the moment more than the mementos.

“I told Tiger, which is the same thing I've said to him a thousand times, ‘Tiger, nobody ever wants records to be broken. That's obvious. I don't care who it is,’” Nicklaus said. “But I certainly don't want you not to be healthy and not have the opportunity to play to break records. I want you to get yourself healthy, do what you have to do to go play, get your golf game back in shape, and I wish you well.”

So if Nicklaus seems overly optimistic consider the source. The only man who can relate to Woods’ plight has no interest in seeing the outcome influenced by the technicality of injury.