Offseason wait is 'finally' over at Frys.com Open 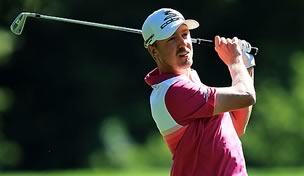 The long wait is over. Golf is finally back.

It’s been over a fortnight since the PGA Tour held a stroke-play event, and the better part of three days since the best and brightest dueled in the mud at Muirfield Village.

If that’s a tad too snarky for you we’ve come by it honestly. It’s not that the Big Leagues are off and racing again some 18 days after Henrik Stenson hoisted FedEx Cup glory at East Lake. That’s always been the case since the playoff era began in 2007.

Professional golf’s offseason has always lasted about as long as a half-time show at the Super Bowl. The error message this time around is that this week’s Frys.com Open is being billed as an “Opening Day.

If the Hyundai Tournament of Champions, the traditional season opener since 1986, had a soft-opening feel to it, this week’s stop at CordeValle is more like a split-squad spring training bout.

If the field at the Frys.com Open wore jerseys, there would be a lot of 58s and 97s on the tee sheet, fine players all of them but you really shouldn’t expect to see many of them when the Tour hits prime time again next spring.

This isn’t a knock on the Frys.com Open, a quality event with a big purse ($5 million) on a hard and fast golf course, or the Shriners Hospitals for Children Open or McGladrey Classic or OHL Classic at Mayakoba, which will follow the “season opener” into the fall.

By every measure these events are improvements over what they were last season, post-Tour Championship afterthoughts adrift in the fall abyss. Each of the fall events now carry full FedEx Cup points and an invitation to the Masters, upgrades by any measure.

But the competitive reality of the Tour’s new split-calendar schedule will leave these freshly emboldened fall stops with fields that look a lot like the fields they had when they were entrenched in the Tour’s no-man’s land.

This week’s tee sheet in California, for example, doesn’t include a single player from the top 25 in the world ranking and just three – Hideki Matsuyama (No. 30), Jonas Blixt (34) and Billy Horschel (35) – from the top 50.

Officials in Las Vegas, Sea Island, Ga., and Mexico should expect a similar turnout despite the added cachet of full points and dramatically increased purses. Although the Frys.com Open purse remained unchanged, moving under the FedEx Cup umbrella meant the Las Vegas stop (from $4.5 million to $6 million), Sea Island ($4 million to $5.5 million) and Mexico ($3.7 million to $6 million) all had to write bigger checks this time around.

And for what? In the case of the Frys.com Open, three of the top 50 players? By comparison, last year’s field at CordeValle had a similar feel with just two – (Ernie Els (No. 22) and Nicholas Colsaerts (35) – of the world’s top 50 players.

Along with the upgrade of the four fall events – the Sanderson Farms Championship, normally played opposite the Open Championship, will join the fall line-up and kick off the 2014-15 season – the CIMB Classic and WGC-HSBC Champions in Asia also joined the FedEx Cup fold, a move that at least partially explains the weaker fall fields particularly at The McGladrey Classic which will be played the week after the World Golf Championship event in China.

The European Tour’s lucrative four-event Finals Series also begins this month with the BMW Masters in China, which virtually assures the top players from the Continent will not play the Tour’s domestic fall schedule.

But then the move to the split-calendar schedule was never billed as a boom for the fall events. Whatever improvement the fall fields enjoy it is little more than a byproduct of a more profound restructuring that included a new qualifying system and the addition of the Asian events to the circuit’s official portfolio.

From the Tour’s perspective, this year’s sweeping changes had a cascading impact on the overall product if not the fall fields.

“The important thing was the ability to restructure the entire calendar. Once you start going down that road , then you look at utilizing this part of the year to really get the FedEx Cup moving,” Tour commissioner Tim Finchem recently told GolfChannel.com. “Starting with the Frys.com (Open) getting point distribution so when you get to the holidays you’re already getting sports fans early in the winter into what the FedEx Cup is about.

“Now we will have pretty good history getting to the holidays. The holidays are a pretty good promotion platform. We think that will enhance the FedEx Cup.

Whether that equates to better fields for the fall events in future years remains to be seen. But in the short term, this week’s event still feels more like spring training than opening day.