Open coming down to Mickelson, Stenson 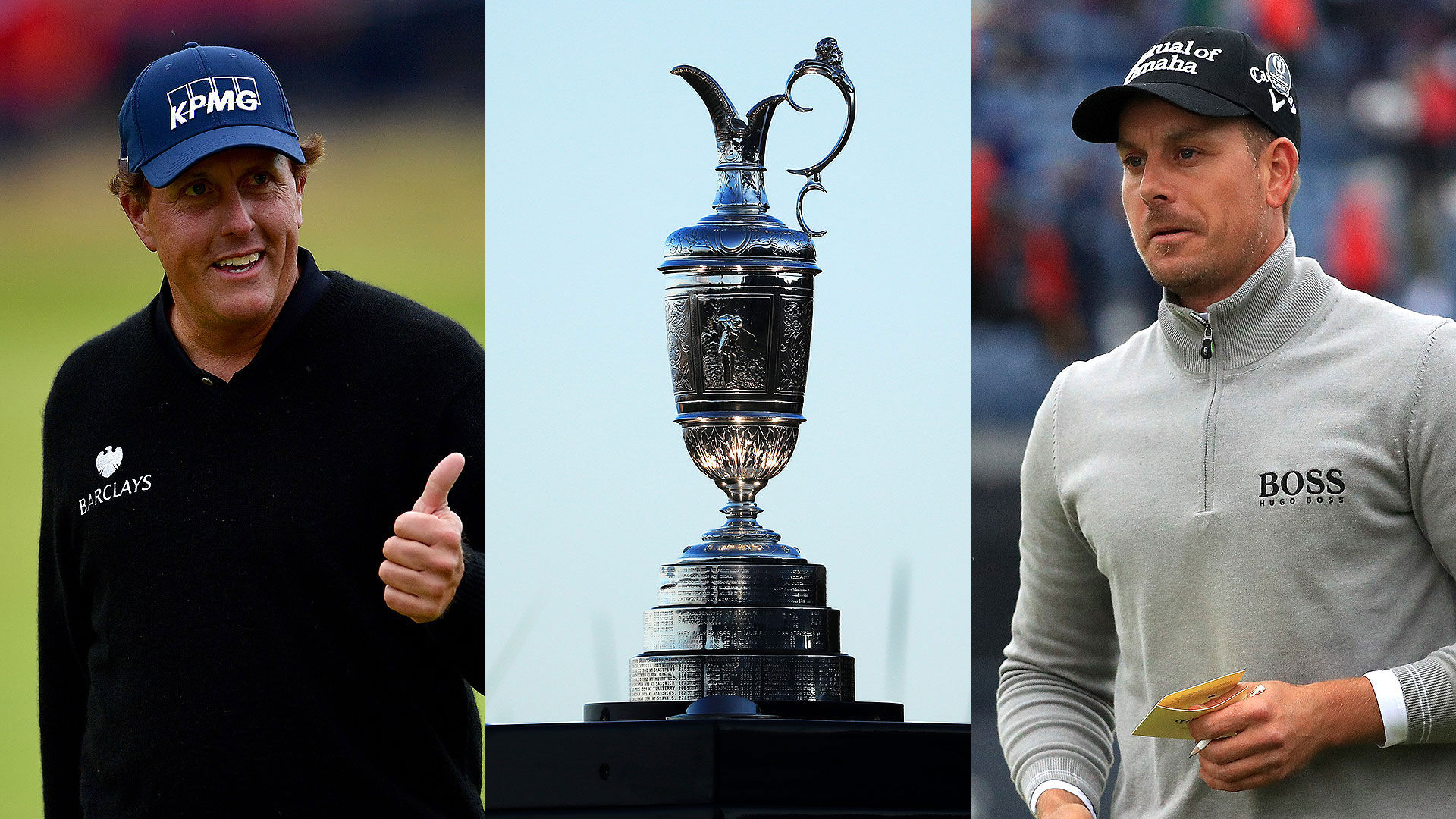 TROON, Scotland – At the risk of offending the other 79 players remaining at Royal Troon, Sunday’s finale will be a two-man act.

Sure, Phil Mickelson can always have, well ... a Phil moment; and Henrik Stenson remains a quirky Swede desperately looking to crack the major ceiling for the first time.

It’s always dicey making the early call, particularly at a major where a single gust of wind off the Firth of Clyde can ruin one’s day, but this 145th Open has become a two-ball. The other 79 will make the rounds on Sunday, but barring a Van de Velde-like meltdown Mickelson and Stenson will have the run of the place.

Rory McIlroy knew it. “Henrik and Phil are sort of playing their own tournament right now,” the Northern Irishman said following a 73 on Sunday that left him a dozen strokes adrift of the lead.

Jordan Spieth even conceded he plans to use Sunday’s final turn as a tuneup for the PGA Championship in two weeks.

“I’ll try to take momentum tomorrow, but understanding that we're going to be working towards the PGA now,” said Spieth, who was 17 shots back when a blustery day drew to a close.

Even Stenson, who got the best of Lefty on Day 3 with a 68 to grab a one-stroke lead over Mickelson, allowed what everyone else with an internet connection and a passing interest sensed.

“As of now you’d think it’s a battle between Phil and myself,” said Stenson, who briefly took the lead early on the front nine on Saturday and pulled away for good with a birdie at the 17th hole and finished at 12 under par.

In fact, it seems the only person who wasn’t willing to buy into the notion of a two-man show was Mickelson.

Asked if he considered Sunday’s final pairing a match-play setting, Mickelson was concise, “No, not at all.”

But then the southpaw has been here before. Literally he’s been here, at Royal Troon, in a similar position only to watch the engraver etch Todd Hamilton’s name into the claret jug.

Mickelson began the final round in 2004 along the Ayrshire coast two strokes off the lead and finished one shot out of a playoff between Hamilton and Ernie Els.

This week, after two days of “easy” golf, the game’s most eclectic left-hander endured a game that, at least early in his round, was downright hard.

Mickelson said his rhythm abandoned him early in Round 3, the byproduct of a helping wind on the outward loop and a closer’s desire to put the competition away as quickly as possible.

“I was a little bit jumpy and my rhythm wasn't very good today,” Mickelson said. “Today could have been a day that got away from me, instead I shot under par and kept myself right in it heading into tomorrow's final round, so I'm proud of that.”

By the time he reached the turn, however, Lefty rediscovered his touch for a 1-under 70 to assure a late afternoon pairing with Stenson at 11 under par.

Although Phil was reluctant to allow himself the luxury of a mano-y-mano match with Stenson, the bright yellow leaderboard told a different story.

No one is closer to the two leading men than five strokes (Bill Haas), and the only players with any real experience on a major Sunday are Sergio Garcia (2 under) and Dustin Johnson (1 under).

That’s not to say Sunday’s matinee will be devoid of the kind of give and take that makes major championships so compelling, at least if Saturday’s bout was any indication.

Mickelson pulled two strokes clear of Stenson with a 30-footer for birdie at the 13th hole, rattling off fist pumps like he was at his beloved San Diego Chargers’ season opener.

But within a 40-minute window there were a pair of dramatic two-stroke exchanges, first at the 14th when Mickelson three-putted, missing a 3-footer for par, and Stenson rolled in a 10-foot birdie putt; followed by another at the 17th when the Swede converted from 20 feet for birdie and Lefty posted his second bogey of the day.

“On 14 without making birdie you don't know how it's going to finish up, but the one on 17 certainly put me in front and gave me that little edge going into tomorrow,” Stenson said. “I've always been of the thought that it's better to be one ahead than one behind, because that means Phil's got to play better than I do tomorrow.”

On paper, another Open title for Mickelson would do little to further Lefty’s legacy other than to spike the sale of binder clips as makeshift hat fasteners, but on second brush the context of the accomplishment would be remarkable.

At 46, Mickelson would be about a month younger than Jack Nicklaus when he won the 1986 Masters to set the standard for timeless accomplishment in golf.

It’s been three years, exactly, since Lefty last won on the PGA Tour and he’d drifted so far from his normal form that Jay Haas had to make him a captain’s pick for last year’s Presidents Cup.

But then age is a relative ideal in golf today and 40-something champions are not exactly unheard of in the modern game.

“I'm 25 pounds lighter, I'm in better shape, I'm physically stronger than I was. I feel better and I'm playing well, now that my swing is back on plane,” he said. “I'm starting to hit some shots like I did 10 years ago and starting to play some of my best golf again.”

Whether it would hold the same historical significance as Jack in ’86 is a debate for another day. What isn’t up for debate with 18 holes remaining at Royal Troon is that this is now officially a two-man race.