Pieces of the Puzzle 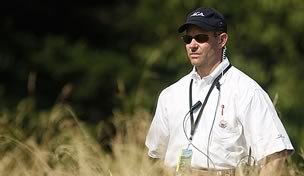 BETHESDA, Md. – On a cold, rainy May morning Mike Davis and entourage slowly make their way around Congressional’s Blue Course. It is not so much a dry-run for next week’s U.S. Open as it is a familiarization course, not so much an oligarchy as it is a democracy of one.

“Before we leave, everybody good with keeping these bunkers (shaved)?” the U.S. Golf Association’s executive director asks the inner circle as they mull about the teardrop-shaped fourth green. “These bunkers have a lot of slope. There’s no way balls are going to stay on that (edge between bunker and green).”

If Joe Dey, the quintessential USGA executive director from 1934 to ’69, ruled the organization with an iron fist, count Davis’ management style as consensus building with a clear mission.

Although Davis would never admit it, when he followed David Fay into the executive director’s office he did so with the stipulation that he’d be allowed to continue his work as the association’s top set-up man for its most-important event.

“We would be idiots if we extracted Mike from his U.S. Open activities,” USGA president Jim Hyler conceded in March.

And why not continue the status quo? Simply put, Davis has avoided the high-profile set-up gaffes that plagued the organization in recent years at venues like the Olympic Club and Shinnecock Hills, so much so word is the membership at the exclusive Southhampton, N.Y., club is considering a return to the Open rota, possibly as early as 2018.

Besides, it’s not as though Davis seems overwhelmed with the additional duties. “I would almost pay the USGA money to allow me to do this. I love putting this puzzle together,” he says.

At Congressional that puzzle started falling into place not long after Ernie Els emerged as the last man standing at the 1997 U.S. Open, the last time the national championship was played in the shadow of the nation’s capital.

Routing and congestion issues plagued the ’97 championship and the par-3 closing hole offered little by way of excitement, particularly when compared with the 18th hole fireworks at Torrey Pines and Pebble Beach in recent years.

Architect Rees Jones calls his handiwork on Congressional’s Blue a “brand new golf course.” Davis is a tad more subdued in his assessment, but then hyperbole is not within the man’s DNA. What is certain is that the layout that awaits this year’s Open field will be vastly different than what Els played in ’97.

The 17th hole, which was parred by just one contender (Els) on Sunday in ’97, has been lengthened (490 yards) and made the 18th hole, while the former par-3 finisher has been reversed and dubbed the 10th hole.

But the most dramatic difference, at least for Davis, will be the sixth hole, which in ’97 and when the AT&T National was played at Congressional from 2007-’09 was played as a par 4. For the first time in 110 attempts the USGA will add to par at a U.S. Open venue (71), playing Congressional’s sixth as a risk/reward par 5.

As Davis scribbles notes and wipes rain from the bill of his hat, he’s asked exactly what distance defines a “risk/reward” par 5.

“Whatever it takes,” he says simply. “I’m going to keep moving up the tee until the majority of the field tries to reach the green in two (shots). We had the back tees at Torrey Pines’ par-5 18th (for the 2008 U.S. Open) but we never used them.”

Perhaps it’s an utter lack of ego, an aversion to numbers, be it a perceived fascination with par or the 500-yard par 4, or a single-digit handicap that gives Davis a player’s perspective; whatever the “why,” the “what” has been a collection of U.S. Open venues that have largely been filed in the “tough but fair” folder.

On a spring day that felt more like fall just outside the “Inner Loop,” the thought occurs that it may be a management style, not the man, that has so deftly traversed the razor’s edge between solid test and simply unplayable.

With nothing but well-worn Gore-Tex standing between himself and the elements, Davis, Hyler and USGA executive committee member Tom O’Toole cover Congressional’s front nine. The mission on this day is to tentatively earmark five pin positions on each green (one for each round and a possible 18-hole playoff), check grass heights and, on rare occasions, suggest more intense maintenance, like at the par-4 fourth hole.

“We’re going to use this back tee for three days, but for on one day I thought about using the far right portion of (a forward) tee to really force them to make a choice,” Davis says. “They can hit it beyond the bend but there’s not a lot of fairway so they have to make a choice. Can you take off a little part of this limb so we can keep the tee markers as far right as we can?”

The U.S. Open has long been considered the street brawl of the Grand Slam game, a triathlon that rewards stamina almost as much as skill. Davis, however, seems more interested in multiple-choice exams.

Shaved banks promise to bring the Blue’s litany of bunkers more into play, a common theme during May’s walk-through and likely to be a hot topic among players during championship week.

“In ’97 you almost had to hit it in one on the fly to get in there. Now if you’re not careful your ball will roll in there which is what we want,” Davis says.

With green speeds expected to approach 14 ½ on the Stimpmeter during the championship, Davis’ best, and most demanding, work may come on Congressional’s putting surfaces.

The club, at the USGA’s suggestion, had Jones soften some of the slopes like on the fourth green to accommodate such speeds and Davis examines each possible location with the eye of a player, as well as an administrator.

Yet for all his success as set-up man, Davis knows the blue blazer comes with a bull's-eye. One bad weather forecast or a single pin position too close to the edge can mean the difference between a successful Open and something less than that.

“You get a green 14 ½ (on the Stimpmeter) trying to lag to that, you’re going 6-7 feet past,” Davis says as he studies a potential hole location on the fourth green. “That’s pretty good.”

If Davis has been predictable during his tenure as set-up man it has been with his desire to err, if at all, on the side of the player. Since taking over for Tom Meeks in 2006, Open champions have finished at 5 over, 5 over, 1 under, 4 under and even par, an eclectic collection of totals that perhaps best defines Davis.

“When you set up a golf course, or at least when I do, I'm not even thinking about a total yardage,” he reasons. “I'm really looking at each hole for what it is, and you really start with the putting green and its complex and work backwards. Is this a green that was designed to have a 3-iron come into it or is it better with a pitching wedge or 9-iron?”

For Davis, a big picture guy shrouded in an accountant’s body, it’s not about par or length so much as it is results. Scorecards don’t make good championships, players do.

As he eyes a final pin position on the sixth green, rain still falling and darkness closing in, Davis finally gives into the elements, “Perfect,” he allows. The hole location, and so far the set-up man.