Playing With A Heavy Heart 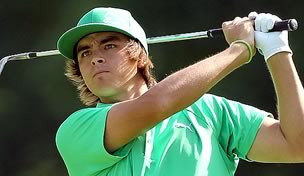 Getty Images
GRAND BLANC, MI - AUGUST 01: Tiger Woods reacts after making a birdie putt on the 17th green during the third round of the Buick Open at Warwick Hills Golf and Country Club on August 1, 2009 in Grand Blanc, Michigan. (Photo by Gregory Shamus/Getty Images)  -

DUBLIN, Ohio – This is not Augusta National and Rickie Fowler is not Ben Crenshaw, although many have predicted the personable PGA Tour sophomore will have a similar Hall of Fame career. But if Thursday’s opening round seemed strangely reminiscent of the 1995 Masters it’s because it was.

Rickie Fowler rounded Muirfield Village in an eventful 68 strokes and is two strokes off the lead a little more than a week after his longtime swing coach Barry McDonnell died in a California hospital.

By comparison, Crenshaw’s ‘95 Masters victory the same week he attended the funeral for his coach Harvey Penick was one for the ages, as they say when the azaleas are in bloom. But Fowler’s opening effort was no less inspirational.

There were no “Harvey bounces,” as Crenshaw’s wife called her husband’s good fortune in 1995, but on Thursday at Muirfield Village there were more than enough moments to think that the man who taught Fowler to be self-sustaining, as well as his swing, was looking out for his most high-profile student.

Like on No. 13 when Fowler chipped in from 15 feet, or at the next hole when his drive sailed right and into a “sod seam.” He took a fortunate drop, laid up and from 133 yards Fowler’s wedge landed right of the pin, spun left and didn’t stop rolling until it rattled into the cup. For those scoring at home, Fowler covered Nos. 12-15 in 11 strokes (5 under) and just two putts.

Not all was cool and clear on a Chamber of Commerce day, however. There were also five bogeys and just five pars, but given the circumstances, Fowler was pleased. Chances are McDonnell would have been just as content.

The driving range pro began working with the prodigy when he was 7 years old – the same year (1995), for those who believe in omens, that Crenshaw made Masters magic – teaching him the swing but, more importantly, teaching him how to self correct. Doctor heal thy self.

In an age of entourages, Team Rickie feels more like an intimate dinner party – with caddie Joe Skovron and conditioning coach Chris Noss the extent of Fowler’s inner circle.

Of all McDonnell’s accomplishments with Fowler – Ryder Cup star, Rookie of the Year – it’s that independence of constant feedback that may be his best work.

“The last four years since I’ve been at college and out on Tour I’d see him maybe once a year when I’d go home. Maybe hit balls with him. Basically just been on my own,” Fowler told GolfChannel.com.

“He taught me to basically be on my own, to figure it out myself. I’d get on the range, throw down a few sticks to make sure I’m lined up right and go from there.”

In this, Fowler seems to have plucked a page from Memorial host Jack Nicklaus’ book. Unlike the lion’s share of today’s professionals, Nicklaus would famously huddle with Jack Grout, his only swing coach, at the beginning of each season and then go about his business solo from there.

The last time Fowler worked with McDonnell was prior to his season-opener at Torrey Pines.

“I was probably with him two hours right before San Diego at the start of my year. We had a good session,” Fowler said. “It wasn’t like I’d go work with him for a day. We’d hang out, hit some balls for maybe an hour or two and take off. Like a little check up.”

On Thursday at the Memorial the news of McDonnell’s passing still seemed to be sinking in for Fowler. McDonnell had been struggling with skin cancer and suffered what Fowler called a major “heart attack” on May 20. But in recent days he’d appeared to stabilize.

“He was doing alright, but I guess they had some complications that Tuesday night,” Fowler said of McDonnell who died last Tuesday.

The 22-year-old conceded that he had not yet completely digested the news. That moment won’t likely arrive until next Thursday when he attends a memorial service for McDonnell at Murrieta (Calif.) Valley Golf Range where the two spent countless hours simplifying Fowler’s whiplash action.

“That will be where it really hits me,” Fowler reasoned.

Until then Fowler still has 54 holes on a golf course that seems to fit him like a pair of bright-orange Oklahoma State pants. He finished runner-up here last year, his Sunday charge derailed by a double-bogey at No. 12, the same hole he birdied on Thursday to start his late-round run.

And who knows, a couple more “McDonnell bounces” and he might have his first Tour title to take home as a tribute. It may not have a Crenshaw-Penick punch to the emotional solar plexus, but as inspirational victories go, it wouldn’t be too bad.