Playing the image-conscious game on the PGA Tour 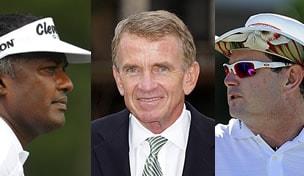 It is a curious coincidence that within the same news cycle that PGA Tour commissioner Tim Finchem was awarded a four-year contract extension, the golf world was offered a rare glimpse at the seedy side of the circuit’s rabbit hole.

Within days of Finchem’s new deal Matt Every all at once embraced and dismissed a scrape with the law over a drug-possession charge and subsequent Tour suspension; a pair of the game’s original bad boys, Rory Sabbatini and Vijay Singh, played “what’s your sign?” at the Sony Open; and a fringe senior tour player was rolled up in an online underage sex sting.

It was all enough to make Finchem’s perfect world, a place where one doesn’t have to make the distinction between marijuana's legality and its perceived legitimacy in some circles, seem inexplicably flawed, as if the Tour owned exclusive rights to the moral high ground.

But that defies logic and simple statistics.

The idyllic pay-for-play world is, for all its flawlessness, no more or no less a slice of society at large, complete with cads and crooks and cleverly concealed con men despite Camp Ponte Vedra Beach’s Utopian claims.

To think otherwise would be naïve, yet when Every went rogue last week in Hawaii alarms were activated across the game’s pristine landscape.

“I just got three months off. It’s just golf. I don’t think I was doing anything wrong. It happened. I’m the same person, I have the same friends and I don’t think it’s that big of deal,” Every said of the drug charge that was eventually dropped. “There’s a lot worse stuff that goes on out here than what I got in trouble for and that’s all I’m going to say about it.”

That Every would speak of a suspension is bad enough, but to besmirch his frat brothers with his “a lot of stuff worse” comment is heresy in Tour circles.

Robert Garrigus made a similar faux pas last year when he told Golf Digest that “there were plenty of guys on the Nationwide Tour who smoked (marijuana) in the middle of the round.”

Both incidents qualified as news for even the casual sports fan not because the revelations were particularly scandalous, it’s not a sports-cast these days without a mug shot or two, but because we’ve been led to believe that somehow golf is above it all. That marijuana use on Tour is, at worst, an inconvenience that is best handled in house despite a recent Time magazine study that revealed 42 percent of Americans have tried marijuana and 16 percent have tried cocaine.

In its quest for legitimacy the Tour has created an image that is both unrealistic and unsustainable.

Unlike most other professional sports leagues, it is Tour policy not to release fines or punishments for violations of the circuit’s “conduct unbecoming” standard, which is the catch all for most infractions.

The rare exception to this rule are violations of the performance-enhancing drug policy, of which there has been just a single case in the example known as Doug Barron, who is, by the way, now taking many of the same medications he was suspended for using in 2010.

But that exception to the grand plan only applies to drugs considered performance enhancing. Positive tests for recreational drugs, like marijuana, are not disclosed.

The don’t-ask-because-we’re-not-telling policy is for Tour types a non-starter, grail written in stone and tucked safely away in a TPC Sawgrass tower.

“The biggest reason is that 90 percent-plus of the disciplinary matters we deal with the public is not aware of them. We see no reason to advise the public of when one of our players does something silly. Why should we do that?” Finchem said last spring. “That's why 92 percent of Americans think that our players are role models, because the conduct on our Tour is very good.”

Perhaps, but that logic is strained to the boundaries of legitimacy when one of the independent contractors colors outside the lines and suggests that the Tour is, like society in general, something well short of perfect.

The Tour would have you believe tee sheets are filled with choir boys, so when Every or Garrigus suggest otherwise it somehow feels like the end of Camelot. When a never-was named Steve Thomas is arrested in an undercover internet child sex sting in Florida we wring our hands and wonder how this could happen? When Singh and Sabbatini exchange four-letter unpleasantries we lament the loss of innocence all the while ignoring the facts.

Every office in America has its share of Everys and Singhs and, sadly, maybe even a Thomas. That doesn’t make it a bad business, just a business.

That’s not to say the Tour is a hotbed of ignominious activity, particularly when compared to other sports, but to bury one’s head in the rabbit hole Finchem has created leads to dangerously inflated expectations.

For 16 years Finchem has skillfully guided the Tour through dramatic times, but it may be time to lose the Teflon image. No one is that perfect.