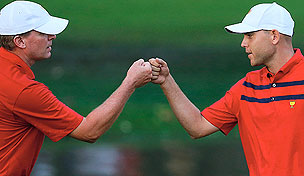 DUBLIN, Ohio – For an event that has spent the better part of two decades searching for relevance in a dysfunctional comparison to the Ryder Cup, Saturday at the Lift, Clean & Place Cup delivered a measure of similarity between the biennial brothers.

First came the weather. And then more weather. Weather like players endured at the Ryder Cup in Wales in 2010 and The K Club in 2006. Weather that has kept players in shelter, three delays totaling more than eight hours, almost as much as they’ve been on muddy Muirfield Village. Weather that will stretch Saturday’s foursome session into Sunday morning and Sunday’s singles bout into ... well, that’s to be determined.

“Don’t suppose they ever have droughts in Columbus,” one International caddie shrugged during a drenching downpour on Saturday.

It has rained so much the last two days, assistant captain Davis Love III’s decision to release “Sammy” the squirrel back into the wild on Friday seemed cruel.

Then came the contentiousness. Just as Adam Scott was setting out in a steady rain late Saturday with this week’s darling Hideki Matsuyama by his side a fan yelled, “Tiger’s better.” And as Angel Cabrera attempted to putt during his foursomes match late Friday another wayward sod got even nastier.

Luckily, Cabrera was immune to the hack and his heckles. “No entiendo Ingles,” the big man smiled.

The only thing missing was competitive parity. Well that, and Ian Poulter, but it doesn’t seem as if those two are mutually exclusive.

The Americans pulled away in the deluge that was the final four-ball session, taking four of five games to grab a 10 ½ to 6 ½ advantage and turn the Internationals' mood as gloomy as this week’s forecast.

When darkness and a damp course finally ended Saturday’s action, some 11 ½ hours after the day had begun, the good news for Nick Price’s crew was that they were leading in two of the remaining four foursome matches (Zach Johnson and Jason Dufner had already shut out Richard Sterne and Marc Leishman, 4 and 3, to extend the American point total to 11 ½). The bad news – the Internationals haven’t won a foursomes session since Day 1 in 2003.

“Obviously, this morning was a little disappointing,” International captain Price said. “We lost some ground and then this afternoon we got off to a great start, think we were up in all five matches, and then the U.S. started making some putts. Honestly, I don’t know how these guys are still on their feet.”

Another halved session, like the Rest of the World eked out in Friday’s delayed foursome bout, isn’t going to be enough. Not with the Americans just six points shy of an outright victory and 12 singles matches looming.

If the Presidents Cup is in search of Ryder Cup-like parity, may we humbly suggest the powers that be play it like the Ryder Cup with just four team matches per session.

Otherwise the identity crisis seems certain to continue. Otherwise the Internationals' only hope is that America’s aging heroes will succumb to the marathon that these matches have become.

On a soggy and exhausting Saturday, consider that 46-year-old semi-pensioner Steve Stricker played 31 holes, while Tiger Woods, the 37-year-old core of the U.S. team who just two weeks ago at the Tour Championship talked of being tired after a long season, also went 31 holes on Day 3.

Luckily Phil Mickelson, the 43-year-old who suggested at East Lake he would consider cutting his schedule by 25 percent in future seasons to conserve his energy and took himself out of a team frame at last year’s Ryder Cup, didn’t have to finish his second round early Saturday and needed only 17 holes to close out Ernie Els and Brendon De Jonge in the third session. Still, Lefty went 30 in the monsoon and the grind was starting to show on all three veterans' faces, if not their games.

“Phil tells me when he wants to go and he’s going to go first. He’s ready to play five matches,” U.S. captain Fred Couples said. “I looked at (Mickelson) and Tiger and said, ‘Look, you know, just tell me what you’d like to do?’ And both of them said, ‘Oh, there’s no question, we are playing every match.’

“Tiger is honestly beat up. Phil is very energetic, and it shows.”

If Price & Co. can’t outplay the Americans, maybe they can wear them down. It’s not a bad plan, not for a team that hasn’t won since 1998 and is mired in a 1-7-1 slide. Not when Sunday’s forecast is even worse than Saturday’s.

Another storm is scheduled to arrive overnight and then again in the early afternoon on Sunday, which prompted officials to restart Round 4 at 7:35 a.m. ET and send the singles out starting at 9:10 a.m.

“It’s not over,” Price declared, sounding a lot like Ben Crenshaw circa 1999. “We still have a lot of golf to play.”

Maybe the Internationals have a Medinah-like rally in them. Maybe the weather will conspire against the weary Americans and turn this apparent rout into a road race. Or is it an off-road race?

Until that happens, however, the comparisons between the Presidents and Ryder cups begin and end at over-served fans and an overstimulated weather radar.