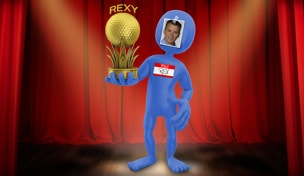 We asked Charlie Sheen to host the annual 'Rexys' gala but he cited conflicts, specifically with Stevie Williams’ demands for “tiger blood” in the green room and Jeff Overton’s claim to all the “Adonis DNA” east of the Mississippi River.

But like Sheen the 'Rexys' are all about winning, so without further ado the envelope please . . .

The Hangover II. Jeff Overton was a consensus late edition thanks to what authorities claim was an alcohol-induced tirade from a limousine window last weekend in Bloomington, Ind.

According to the Bloomington Herald-Times, Overton was arrested on preliminary charges of resisting law enforcement, public intoxication and disorderly conduct, although reports that he was yelling “boom baby” at Kentucky fans have not been confirmed.

He was released from Monroe County Jail after posting a $500 bond shortly before presenting a $50,000 check to the university to support a Play Golf America program during the Indiana-Kentucky basketball game.

The Herald-Times also reported that Overton was arrested in Bloomington in December 2007 on a public intoxication charge that was dismissed when he enrolled in a pre-trial diversion program.

The only thing missing from Overton’s wild night was a drug-dealing monkey, Mike Tyson’s tiger and an ill-advised tattoo. Remember, what happens in Bloomington, stays in ...

Tim Tebow Chalice. OK, maybe Webb Simpson’s rise in 2011 is not exactly Tebow-esque, but the similarities between the two are unmistakable.

Even Simpson’s own caddie once questioned his swing mechanics and the two-time Tour winner has not been shy about his faith, so much so one half-expects him to show up next year with “John 3:16” etched onto his hat.

Like Tebow, Simpson exceeded everyone's expectations except his own in 2011, nearly claiming the FedEx Cup and money titles, posting 12 top 10s and going 3-2-0 in his first Presidents Cup.

Word is ESPN’s Stephen A. Smith will retire if Simpson wins a major in 2012, or something like that.

It’s not you, it’s me Award. Phil Mickelson’s worst putting year as a professional begot one of the most unexpected changes in modern history when the southpaw switched to a belly putter midway through this year’s FedEx Cup playoffs.

The move garnered plenty of attention but did little to help Lefty fix his putting woes and by the time he arrived in Australia for last month’s Presidents Cup he’d benched the long version.

Lefty said he would practice with the long putter during the offseason, but the body language was clear – don’t call me, I’ll call you.

The Silver Scapegoat Award. It may be time to rename the “SSA” the Rees Jones Cup following a particularly difficult year for the “Open Doctor.” The criticism reached a crescendo after Geoff Ogilvy rallied in Boston to advance to the third postseason event in Chicago. “My reward is I get to play Cog Hill,” the Aussie deadpanned.

It is curious that there wasn’t a single complaint filed against Jones for his handiwork at East Lake, home of the final playoff event. At East Lake officials were clear that Jones was to adhere to the original Donald Ross design, whereas in Chicago the mandate was to create a course that could host a U.S. Open.

So to be clear, if Jones is guilty of anything it is his ability to follow directions.

Conspiracy Cup. In one of the season’s most surreal moments Tiger Woods marched off TPC Sawgrass after just nine holes and onto the “DL” for the second consecutive year. Amid the confusion of Woods’ early exit from The Players, an overzealous security guard closed off the players’ parking lot “by order of the FBI.”

Tour officials denied any such order and there were no “G men” to be found as Woods wheeled out of the parking lot on his way to, we can only assume, Area 51 for treatment.

The vanishing man Award. Through the first month of the season Mark Wilson was one of the Tour’s hottest commodities, winning two of his first three starts and quietly becoming the player to beat in 2011.

When the dust finally settled, Wilson – one of the circuit’s most endearing and likeable players – had posted just two more top 10s and narrowly advanced to the Tour Championship.

In short, the Chicago-area resident faded faster than the Cubs in September.

Can you hear me now Cup. For two years Tiger Woods has gone from being the game’s bottom line to a punch line, so it must have taken no small amount of effort to choke back a hearty “I told you so” following his victory at the Chevron World Challenge.

Although Woods’ 18-man member-member will never be confused for a Grand Slam, the host’s victory had to be just as rewarding on some level, whether he’d admit it or not.

“I felt very comfortable in the tournament from start to finish,” Woods said in his year-ending post on his website. “Golf doesn’t change.”

A good fall doesn’t guarantee anything – remember, he closed 2010 with a solid Ryder Cup and runner-up showing at the Chevron – but your scribe could almost hear Woods as he left Sherwood Country Club, “Can you hear me now?”

The REM Trophy. To be clear, front-man Michael Stipe said he’d reunite with REM only “if we need the money,” and Dustin Johnson just seemed to need something familiar. Still, Johnson’s renewed relationship with former caddie Bobby Brown has a “getting the band back together” feel to it.

Johnson and Brown split in the spring and the player’s decision to hire caddie-yard legend Joe LaCava seemed a perfect fit. When LaCava bolted DJ’s bag for Tiger Woods, however, all roads led back to Brown, who Johnson teamed with for four of his five Tour victories.

Although the move seems obvious enough let’s hope the duet avoids some of their old stuff, most notably high-profile snafus at the 2010 PGA and 2011 Northern Trust Open.

Most likely to need a Gag Order Award. For more than a decade getting Stevie Williams to say anything was nearly impossible, but in the wake of his high-profile mid-summer split with Woods it’s become a challenge to get him to shut up.

Following his new man Adam Scott’s victory at the WGC-Bridgestone Invitational Williams caused a stir when he told reporters, “I’ve caddied for 33 years, 145 wins now, and that’s the best win I’ve ever had.”

At the WGC-HSBC Champions the New Zealander sparked an even larger controversy with racially insensitive remarks at an awards dinner that were directed at his former boss.

Your scribe has just two questions: When did Williams learn to talk, and how is it possible that a man with 145 career wins isn’t in the World Golf Hall of Fame?