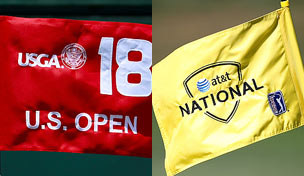 That’s what U.S. Golf Association executive director Mike Davis must have been thinking as he watched the action unfold at Aronimink Golf Club – a measured slug-fest where par has not succumbed to the inflationary realities of the modern game and hitting fairways matters.

It’s a dramatic contrast to Congressional and this year’s U.S. Open – an event some say was an Open in name only.

Contrasting weather conditions, of course, dictate most of what transpired at Congressional – where Rory McIlroy mowed down century’s old scoring records, to say nothing of a stunned field – and on Thursday at Aronimink.

At Congressional hot and dry preceded a predictably wet week, the nuclear option for set-up types, while PGA Tour officials enjoyed the preferred opposite, rain in the weeks leading up to the AT&T National and cloudless sunshine this week.

On Tuesday defending AT&T National champion Justin Rose tweeted, “It could be more U.S. Open [than] the U.S. Open was,” and on Thursday the Englishman’s sage predictions played out perfectly.

Twenty-eight players posted sub-par scores on Thursday at the AT&T National, compared to 32 on Sunday at Congressional, a collection that included McIlroy’s silly 69 to complete his Open march.

“This course is set up like a U.S. Open,” said Joe Ogilvie, whose 3-under 67 wedged him into a tie for third place. “The fairways are a little bit wider, but it’s definitely playing very similar . . . except for this year’s U.S. Open.”

Tour officials got the weather the USGA was hoping for, but to hear the rank-and-file make the obvious comparisons on Thursday it’s impossible not to think that maybe AT&T National got the golf course the blue blazers wanted as well.

“This golf course is a lot firmer (than Congressional),” said Robert Garrigus, whose opening 68 is two strokes off the pace set by Adam Scott and Hunter Haas.

“The rough is thicker and the greens are firmer and I don’t think double digits (under par) is going to win this week. I think right around 10 under par will get it done this week.”

Garrigus, who tied for third at Congressional for co-low American honors, lets that statement linger in the air for a moment before adding, “We’re going to have fun at Olympic next year.”

The Olympic Club is scheduled to host next year’s national championship and caddie yard wisdom suggests that Davis and the USGA will want to prove that they haven’t gone soft when they set up the 2012 venue. But that’s a different column, and a much different golf course.

Similarly, Aronimink is being viewed much differently, perhaps even as a more worthy Grand Slam test, than Congressional. It’s a fact that likely explains why Kerry Haigh, the PGA of America’s top set-up man, was lurking about the Donald Ross gem on Thursday.

Aronimink hasn’t hosted a regular men’s major since the 1962 PGA Championship, and has been the site of just two USGA championships (’97 U.S. Junior and ’77 U.S. Amateur) in its 115-year history. The U.S. Open will be played at nearby Merion in 2013 so it doesn’t seem likely the USGA would come calling. But the PGA hasn’t held “Glory’s Last Shot” in the Philadelphia area since that ’62 championship.

Considering how Aronimink has held up to the modern game, not to mention the inevitable comparisons to Congressional, it might be time to weave the layout back into the Grand Slam fold.

AT&T National moves back down Interstate-95 to Washington, D.C., next year, leaving Philly fans golf-less, again. It’s a curious injustice considering the size of the market and the potential quality of a venue like Aronimink.

“Even if I wasn’t a member here it’s probably as good as it gets as far as what we play on Tour,” Sean O’Hair said. “It’s one of the top 5 courses we play all year.”

Tour officials got the conditions, and maybe even the course, the USGA wanted. Now it’s time for Aronimink to get the major it deserves.