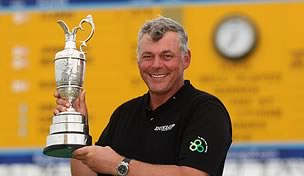 SANDWICH, England – Scenic Bushmills Road is the ultimate old country anomaly – suburban sprawl on one side dotted with trailer parks and brightly colored billboards, sweeping views of the north Atlantic and venerable Royal Portrush Golf Club on the other.

Expect that busy landscape to be even more cluttered when Darren Clarke motors home on Monday, and he couldn’t be happier.

By the time the 42-year-old father of two makes it back to Northern Ireland, there will be a “Congratulations Darren, 2011 British Open champion” sign erected along Bushmills Road to match a similar celebratory message the cozy seaside village put up following the 2010 U.S. Open victory by Graeme McDowell, another native son.

It will be the ultimate homecoming for a man who lost his way and his game following the 2006 death of his wife Heather, claret jug in hand, likely filled with his beloved Guinness, and major monkey off his back, scattered to the fierce winds that made the ’11 Open Championship a perfect fit for the lifelong “mudder.”

“We’ve had some pretty dark phone calls,” said Clarke’s longtime manager Chubby Chandler. “He lost about five or six years of his career.”

There are victories that transcend sport, emotional accomplishments that are worth more than the sum of their athletic parts, but this, the Four Seasons Open – with players often teeing off in a winter gale only to putt out under warm, sunny skies – was something else.

That Clarke finally broke through the grand slam ceiling just days after a closing-round collapse at the Scottish Open will only add to the legend, which promises to grow even if the man himself is looking to shrink. On Monday Clarke – who began the week at 111th in the World Golf Ranking, a 150-to-1 Open long-shot and weighing in at a generous 200 pounds according to the media guide – promised Chandler that he would begin a Weight Watchers program.

“Five (Weight Watchers) points for a pint of Guinness, it would be a bad week for me to start,” Clarke said flashing his signature smile. It was a smile, and a moment, that didn’t seem possible just a few years ago.

Following 2006 nothing came easy. Not the game that he took up with his father, Godfrey, at Dungannon Golf Club nearly four decades ago, not the putts that lifted him to 13 European Tour titles, not the motivation that drove him to be a Ryder Cup staple.

He’d fallen so low that one writer from the United Kingdom described his career in particularly unflattering terms as “an inexplicable slide toward irrelevance.” On Sunday, claret jug resting by his side, Clarke couldn’t help but offer a playful response.

“What is this a mirage?” he smiled at the offending writer and motioned toward the silver chalice. It didn’t seem Clarke was holding a grudge, however, when he had a few cases of champagne delivered to the press tent late Sunday.

The tipping point came late last year when he packed up his two boys and moved back home to Portrush from London. The results were almost instant. He won earlier this year in Spain and arrived at Royal St. George’s confident, yet frustrated by his pedestrian putting.

The final piece of the puzzle was waiting for him on Wednesday on St. George’s practice putting green in the form of Dr. Bob Rotella. The two had worked together for years but had drifted apart when Clarke began limiting his playing schedule in America.

For Rotella the fix was simple.

“Darren made a comment to me, ‘I’ve been through the tough times and the good times. I just want to play my best,’” Rotella said. “There is a relationship between being happy and becoming unconscious and being serious and being conscious.”

For 72 wind-whipped holes Clarke only appeared to be unconscious. Despite a four-club wind that dismantled umbrellas from Dover to Deal, the Ulsterman was two closing bogeys away from becoming just the fourth man to win the Open with four rounds in the 60s.

“As to what is going through my heart,” said Clarke, the first Northern Irishman to win the British Open since 1947. “Somebody up there (Heather) is looking down on me. She’d probably tell me, ‘I told you so.’”

Clarke closed with a 70 for a 5-under-275 total, three strokes clear of the American two-ball of Phil Mickelson and Dustin Johnson.

In fairness, it wasn’t as easy as Clarke made it look. In fact, before he reached the turn on Sunday Mickelson had defied conventional wisdom and pulled even with him thanks to a flawless front-nine 30.

Lefty endeavored to play this Open, his 18th, like it was his first, and matched Clarke at 5 under with a 25-foot eagle putt at the seventh just as the tempest began building to the north, but ultimately he finished like a rookie.

A missed 3-footer for par at the 11th rattled Mickelson and he never recovered, following with back-to-back bogeys at Nos. 13 and 14 for a 68. Still, it was links progress. His runner-up showing was his best ever at the game’s oldest tilt and the moral victory didn’t escape Lefty.

“Oh man, that was some of the most fun I’ve had competitively,” Mickelson said. “I hit some of the best shots I’ve hit in the wind, not just today but really all week.”

There will be one shot into the teeth of the gale that Johnson, who began the final day of a major in the final group for the third time in his last six grand slam outings, will remember for some time. Just two strokes back and the par-5 14th waiting, Johnson (68) pushed his second shot closer to adjacent Prince’s Golf Club than the 14th fairway, out of bounds and out of contention.

It put an end to what was shaping up to be an American breakthrough of sorts. The red, white and blue major drought is now 1-for-7. It says much about the state of the game in the United States that after Mickelson and Johnson, it was 61-year-old Tom Watson who most stirred the American spirit.

Ivor Robson has been calling Open tee times since Old Tom was Young Tom (37 years). “On the first teeee, Tooom Watson,” he has announced in his singsong pitch for 33 years. It must never get old.

Although Old Tom was outplayed on Thursday by Young Tom (Lewis), Watson followed with rounds of 70-72-72 to tie for 22nd, his 15th top-25 finish at the Open.

“It was a wonderful experience,” Watson said. “I had a hole-in-one (No. 6 on Friday). I mean come on. It couldn’t get better than that.”

What would golf writers do without Tom Watson?

But then if a Watson miracle is too much to ask for, a Clarke comeback may be too much to believe. He wasn’t perfect by any measure, missing more fairways than he hit (23 of 56) and finishing tied for 31st in putting (1.65 average), but he was good enough.

“Twenty years he’s been trying to win it,” Godfrey Clarke said. “Between the kids being happy and him being happy it sort of settled him down, took some of the steam out of him.”

They say the ancient links at Royal Portrush, which hosted the 1951 Open Championship, doesn’t have the infrastructure to rejoin the secluded list of rotation courses, although whoever made that observation must not have checked the grand slam gridlock this week in Sandwich.

Two major champions in a little more than a year may finally change that thinking, but first the seaside enclave may need to tidy up all that sprawl along Bushmills Road.