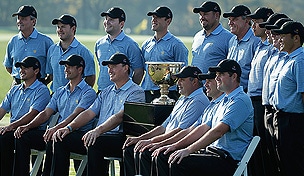 DUBLIN, Ohio – If it is true that one can only have bad association with memories, Nick Price’s best chance this week in middle America rests with his seven rookies.

If the Rest of the World is going to wrest itself off a victory schnied at the Presidents Cup that stretches back to the Clinton administration, it will do so on the backs of its fresh-faced majority – Brendon De Jonge, Graham DeLaet, Branden Grace, Marc Leishman, Richard Sterne, Hideki Matsuyama and Louis Oosthuizen.

There is no other choice.

Sure Adam Scott and Ernie Els will anchor the International side, as they have done for the last decade, but if there are any certainties entering this week’s Presidents Cup it is the status quo will not be enough to turn an event that has overwhelmingly been dominated by the United States.

In nine outings, the Americans have won all but two matches (1998 and a tie in 2003) and have never lost a home game. With seven rookies in tow on a distinctly American-style course serving as the global pitch (Muirfield Village), that wasn’t exactly change one felt Tuesday in the fall wind.

But in those untested seven, Price sees hope – so much so that he made both of his captain’s picks rookies (de Jonge and Leishman).

“I think they feel more of a team today,” Price said.

In some ways, the abundance of rookies on Price’s squad has created a cast system, a circle closing tightly around a common theme.

“With there being seven, it makes it a little bit easier,” Grace said. “There's seven guys that haven't been here before. They haven't had this experience. It's nice to get all that experience and sharing with guys like that, especially the great guys we have got on our team.”

Nor will Price’s “seven” be dogged by the ghosts of four consecutive losses in the event. They haven’t had to endure the heartbreak and horror of blowout losses and lopsided matches that have many contending that if the International side doesn’t get off the schnied soon they risk rendering the event irrelevant.

“We don't really know what to expect so we're kind of coming in somewhat blind, whereas some of the veterans know maybe how tough it is and how difficult it's going to be,” DeLaet said.

Considering Tuesday’s practice round pairings, it appears Price seems certain to mix and match his veterans with the newcomers as best he can, but with more than half his team playing their first Presidents Cup there’s only so much he can do.

Expect DeLeat to play with Jason Day, who is playing his second match; Leishman to pair with Scott; Els, who is making his eighth start in the Presidents Cup, to go out with either Grace or Sterne; and Oosthuizen, a rookie in name only, would be a good match with fellow South African Charl Schwartzel.

Having six South Africans and three Australians certainly makes things a little easier for Price, but that still leaves Matsuyama and either Grace or Sterne looking at an all-rookie team sometime over the first four days. Not exactly a best-case scenario when the confines are this unfriendly.

Price will lean on his rookies because he has no other choice. Unlike the Ryder Cup, where four players from each team sit out the team matches, everybody plays at the Presidents Cup.

For Price, this is golf’s version of “Moneyball,” a young, inexperienced team thrown into the big leagues. And like Oakland’s Billy Beane, the International captain knows this is a numbers game – the first team to 17 ½ points wins however you get there.

Price wasted little time on Monday plugging in the proper credentials, clearly with an eye toward his untested newcomers.

“Listen,” he implored. “There is no better feeling than lifting that trophy on Sunday. Believe me, we're going to have a party if we do it.”

That last part was for the benefit of the rookies, because the veterans certainly know what to expect.