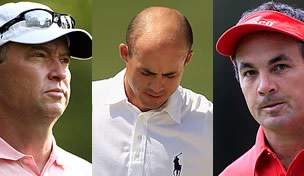 Getty Images
PACIFIC PALISADES, CA - FEBRUARY 17: Phil Mickelson hits his tee shot on the 17th hole during the final round of the Northern Trust Open on February 17, 2008 at Riviera Country Club in Pacific Palisades, California. Mickelson won at 12 under par for the tournament and a two stroke victory. (Photo by Stephen Dunn/Getty Images)  -

BETHESDA, Md. – A handful of hopefuls will set out Sunday afternoon onto the toughest test in major championship golf under the most unforgiving pressure and yet somehow they will be getting off easy, at least when compared with the burdens carried by others.

What is the intensity of Grand Slam glory when compared with the emotional abyss of sorrow and loss and even guilt? Majors are won and lost in a moment, memories, for better or worse, never take a respite.

“I think about him every day, man. Every day,” says Christo Greyling of his late father Iaan.

For Greyling, a former prodigy turned project who is playing his first U.S. Open, Congressional is a silver lining loaded with mental minefields. This was the tournament Iaan Greyling wanted his son to play, and maybe even win someday, when he uprooted his family from their farm in search of the American dream.

So forgive Greyling, and the other members of this heavy-hearted club, if Open Sunday takes an occasional back seat to Father’s Day and all the emotional detours that come with the grieving process.

On a picture-perfect summer day Greyling beams when asked what his dad would make of his son’s first major championship start: “He’d be going crazy.”

Greyling hasn’t smiled much lately, not since his phone rang one October morning in 2009. On the other end of the line was his mother, Katinka, with the news that Iaan had hanged himself. He was 53.

On Oct. 14, 2009, Christo’s 27th birthday, Iaan was buried. Greyling and his family have been looking for answers ever since.

Iaan Greyling’s golf real estate business had all but crashed along with most of the nation’s housing market. Engaging and affable to the extreme, Iaan Greyling has had been quietly battling demons for years since his days on the battlefield as a member of the South African army. The economic crash was fate’s final haymaker.

The elder Greyling arranged a meeting with a friend at 11 a.m. to assure no one in his family was haunted by the images of such a grisly discovery.

With tears emerging from behind a pair of wrap-around sunglasses, Christo Greyling circles back to familiar territory. How did he miss the warning signs, depression, anxiety and even what Greyling now calls a “fake suicide” in 2008?

“It’s been tough for us to deal with the guilt,” he says. “We all felt we could have done something more.”

U.S. Open fairways, what little there is of them, are no place for self-reflection. For Greyling, Congressional is every bit a cathartic journey, another milestone in a program with an infinite number of steps, including birdies on three of his last four holes in Round 2 to make the cut.

“We felt so betrayed. We all got very depressed,” he admits. “I got a little taste of finding out what it’s like to feel like you’re never going to be happy again. Not to have any energy. Not care about anything. I took it personal in the beginning, but that was just his time.”

It’s no small irony that October 2009 was also Dave Adamonis’ “time.” The college golf coach and champion of Rhode Island junior golf had battled three types of cancer before he finally succumbed surrounded by family and friends in a New England hospice.

Not that Congressional was unfamiliar ground to Adamonis. He Monday qualified for the 2005 Booz Allen Classic with Dave on his bag and the two golf junkies spent much of the week exploring the iconic American club.

“We had a friend taking pictures of us, this was a U.S. Open course. It would have been great to have him out and caddying for me on Father’s Day,” Adamonis pauses. “Or just have him out here . . .”

Call it a son’s burden, particularly when your occupation and your relationship with your father are anything but mutually exclusive. Since Adamonis could swing a golf club his father was motoring him around New England to junior events or to a practice tee to perfect his homemade swing. Dave Adamonis was equal parts swing coach, sports psychologist, caddie and competitive conscience.

During a difficult opening 77 at Congressional a lifetime of teachings swirled through Adamonis’ head. Simple things that Dave Adamonis would use to help his son focus like “PPO,” patience pays off, or “PPT,” power of positive thinking.

“Numerous times today I thought about getting a little quick at the top and he would say just wait for it,” remembers Adamonis, who missed the cut. “I’ve been playing in the (U.S. Open) qualifier for 25 years because he was always pushing me to play. Thanks to him, I have the opportunity.”

Davis Love III can relate. In fact he wrote a book entitled “Every Shot I Take” as an ode to his father, famed swing coach Davis Jr. who died in a 1988 plane crash.

“Hitting balls just now,” Love gestures toward the practice tee, “I’m thinking, ‘What would Harvey Penick tell my dad?’ I’m hitting drivers at 70 percent and thinking that’s exactly what my dad would do.”

At a U.S. Open, more so than any other championship, those memories persevere, fueled in part by the tournament’s traditional Father’s Day finish and a bond created by a shared interest in the game.

Congressional is Jonathan Byrd’s fourth U.S. Open, but it’s the first he’s played since his father, Jim, lost his battle to brain cancer in July 2009. For Byrd it’s less a memory than it is a milestone.

Jim Byrd never strays far from his son’s consciousness, but this U.S. Open has been a particularly eventful, and emotional, exercise. On three occasions this week he has been approached by someone who was touched by Jim and each time Byrd was transported back to that summer day in 2009 when his father died.

“I watched my dad take his last breath,” he says quietly.

For Byrd those memories are a form of emotional currency he has learned to embrace over time. Like Greyling, Adamonis and Love he’s discovered there’s no escaping or expediting the grieving process.

“I teed it up a couple times this week just thinking about how much he’d want to be here and I’ve kind of teared up because I have joyful memories of my dad and that’s a good thing,” says Byrd, who missed the cut.

Not that it’s become any easier. Jim Byrd is always in his thoughts, but this week has opened, and maybe even closed, a new chapter in the healing process.

“Walking around on Tuesday with Mark Wilson, his dad was inside the ropes, and I got kind of teary with that because I was kind of jealous,” Byrd admits. “I think about him more this week than I have all year.”

Yet as painful as it all seems it’s a journey Byrd would never trade.

By nature, U.S. Open Sundays are the dominion of frayed nerves and struggling to stay in the moment. For the heartbroken it’s a matter of perspective and embracing the memories, however painful.

“I picked the right one to make it to, this being Father’s Day and all that. It’s been real tough on my family,” Greyling says. “This will help heal the scars.”

There will be competitive heartbreak on Sunday, always is, the byproduct of 4-inch rough and the prospect of a life-changing victory. Greyling & Co. may not win the 111th U.S. Open but for them this Father’s Day is an emotional victory, by any measure.