Lean on me: Caddie aids Spieth in second major win 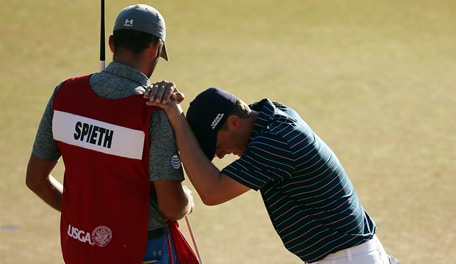 UNIVERSITY PLACE, Wash. – Jordan Spieth is unfiltered and utterly unfamiliar with an unspoken thought, like when he let the world know his feelings regarding Chambers Bay’s 18th hole masquerading as a par 4 on Friday.

“The dumbest hole I’ve ever played,” he muttered.

Late Sunday, as a picturesque sunset slipped toward the Puget Sound, he barked at his second shot at the 18th hole, which was this time playing as a proper par 5: “Get it wind, just any kind of wind get it.”

Always there to interpret and iron over Spieth’s running dialogue is Michael Greller, the ultimate wingman.

“Get that good picture, bud,” the caddie advised his man on the 18th tee and again before Spieth sent his 3-wood second shot soaring into the evening sky to 16 feet.

Two putts and 12 tense and turbulent minutes later, it was still Greller who was there for Spieth, the 21-year-old U.S. Open champion.

As the duo made their way back to the 18th green for the award presentation it was Greller, not Spieth, who was cheered by the crowd.

One of their own, one of Chambers Bay’s own had won their Open.

“To come here and win this one for him, it’s really special,” Spieth acknowledged following a closing 69 that was good enough for a one-stroke victory over Louis Oosthuizen and Dustin Johnson, who three-putted the last hole from 13 feet. “To hear the support for Michael made it feel like we were the crowd favorite.”

Greller will dismiss his part in Sunday’s proceedings and a historic victory that now sets the stage for a run at the single-season Grand Slam, and adhered to the strict caddie code of show up, keep up and ... well, when you’re with Spieth silence really isn’t an option.

“If anything, I felt more pressure because people think I know [Chambers Bay] so well,” said Greller, who began his looping career at Chambers Bay eight years ago when the course first opened.

“I really don’t and Jordan knew that. What I did bring is just really good vibes. In the end it comes down to Jordan being just an unbelievable player and I just try to stay out of his way.”

Caddies don’t stripe 3-woods to eagle range on the 72nd hole, they don’t recover from sloppy starts like the one Spieth endured on Sunday when he three-putted the first hole and, at least the good ones, never consider themselves to be anything more than an outdoor butler.

But Spieth, who became just the sixth player to ever win the first two legs of the single-season Grand Slam, will be the first to acknowledge that Greller is more than the sum of his parts.

“Michael is the one who just shoved positive thoughts into my head the whole week,” said Spieth, who forged a three-stroke lead with a birdie on the 16th hole but made his second double bogey of the week at No. 17 to drop into a tie with Oosthuizen and Johnson. “He deserves a lot of credit this week. That was the best week he ever caddied.”

In this case, as it does with all great player-caddie combinations, the relationship goes much deeper than simply pulling clubs and reading putts.

Spieth skipped last year’s WGC-Bridgestone Invitational to rest after a long season. At least that was the line at the time. In fact, he skipped the free-money, no-cut event to attend Greller’s wedding at Chambers Bay.

The two first met in the Pacific Northwest when Greller caddied for a then-17-year-old Spieth at the 2011 U.S. Junior Amateur at nearby Gold Mountain Golf Club, an event Spieth won.

And it was at Chambers Bay where Greller perfected his trade. The former sixth-grade math teacher would sneak out after summer school and “experience something different.”

During those moonlighting days Greller would take a “double-bag” loop in the morning and “single-bag” the same afternoon. Those endurance tests made Sunday’s 18 seem like a stroll.

“That bag gets pretty light late in the afternoon at a major,” he smiled.

As the week unfolded at a brown and bouncy Chambers Bay the good karma continued to build.

On Monday, a former member of the girls’ golf team that Greller used to coach was his standard-bearer, on Thursday it was a former student carrying Spieth’s score and on Sunday his former principal at Narrows View Intermediate School was the hole captain at No. 10.

“There were just so many fun interactions like that throughout the week and that made it so much more special,” Greller said.

But it was his interaction with Spieth that makes Greller such a key part of Team Jordan. The outspoken two-time major champion can appear rattled, even fidgety, at times on the golf course, like he did on Sunday when his tee shot on No. 17 sailed right.

Both player and caddie had been here before, like at the 2014 Masters when he went bogey-bogey just before the turn to lose his advantage and again this year at Augusta National when he answered a similar late miscue with birdies at Nos. 13 and 15.

It’s become a familiar formula, Spieth yaps at his golf ball and Greller gives Spieth something positive to focus on.

“Jordan is going to get fired up and I love that about him,” Greller said. “When something doesn’t go right he’s not going to stuff it in there and not say anything. He’s going to express himself.”

It was rare then that as the duo watched Johnson pull his birdie attempt at the last that both player and caddie were left speechless.

“There was really nothing said for about 10 seconds. After a long pause he finally said, ‘This one is for you, Michael.” And he gave me the ball from [No.] 18,” Greller said.

Caddies don’t win major championships, but this victory was a team effort by any definition.