Spieth silences his doubters – including himself 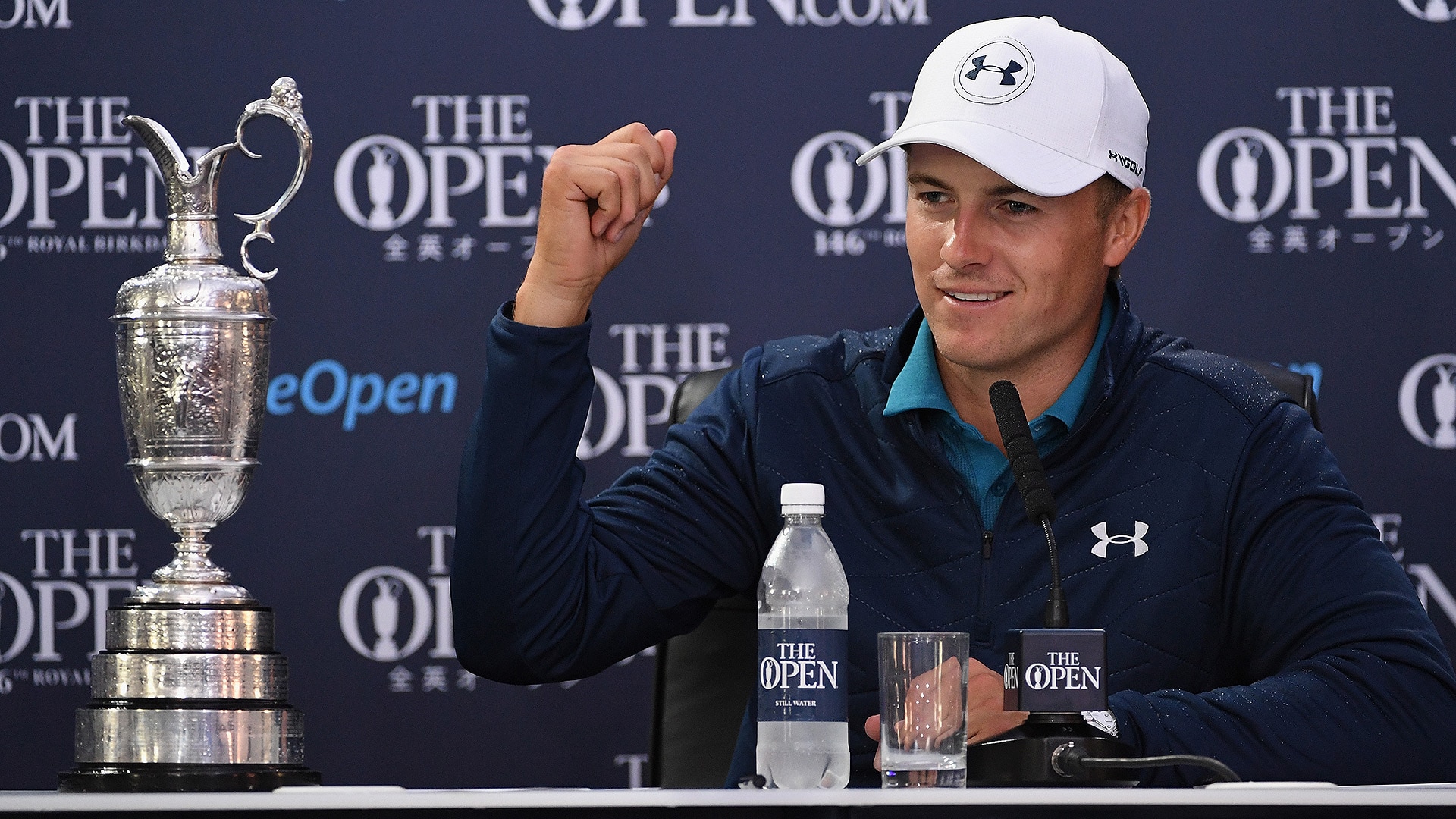 SOUTHPORT, England – It wasn’t Jean van de Velde standing in the burn at Carnoustie, but it was no less outrageous – Jordan Spieth perched atop a dune glaring into a cold rain.

This is where major championships go to die.

Although Spieth was trying as best he could to see a line to the 13th green, and minimize the damage of a drive that ended up closer to the practice tee than it did the fairway, he may as well have been watching the claret jug slipping away into the gloom.

Van de Velde went on to lose that 1999 Open in spectacular fashion, whereas Spieth’s finish was even more remarkable and completed a wire-to-wire victory that was far more eventful than anyone could have imagined just 24 hours earlier.

“Give me a round number,” Spieth shouted to his caddie Michael Greller from atop the hill adjacent to the 13th fairway. Two holes later, he was once again barking at his trusty bagman, “Go get that,” he defiantly yelled after his 70-footer for eagle trundled into the hole, the emotional extremes telling you everything you needed to know about the 146th Open.

History will recount that it was that eagle, or maybe the birdie putt at the 16th hole or the tee shot that never left the flag at No. 14 for a bounce-back birdie, that won Spieth his third major; but that ignores the unsightly significance of his bogey on the 13th hole.

In his prime, Stewart Cink once described Tiger Woods’ Sunday style with a lead as a prevent defense, a give-them-nothing-but-take-everything sort of deal.

Outwardly, Spieth may not have the same 1,000-yard stare, but the internal burn to chip away at the competition is no less intense. It was the plan when he began the final day at Royal Birkdale – kill 'em with pars.

But this wasn’t like that, at all. This was more heavy lifting than a heavyweight bout, with a gritty texture befitting this Liverpool suburb.

That fairways-and-greens blueprint didn’t survive the first hole, which Spieth bogeyed. He chopped up the third and the fourth to drop into a tie for the lead with Matt Kuchar, and when he added another at the ninth – he’d penciled in just four bogeys total through his first 54 holes – the free-fall was in full flight.

Things move at 100 rpms on a Sunday with a major title on the line, and when Spieth’s drive sailed some 100 yards right of the short stuff at No. 13 the wheels were visibly spinning.

Over the course of more than 20 surreal minutes Spieth consulted with one rules official, then another. He herded the massive crowds this way and that, and paced around like a madman before finally coaxing a 3-iron short of the green and getting up and down for an all-world bogey.

“From there he did what he’s always done, he just grinds,” Greller said.

This wasn’t the 2016 Masters, when he squandered a five-stroke lead with nine holes to play, or even the ’15 Open when he finished a shot outside a playoff following a bogey at the 71st hole. This was much-needed proof, to himself if not the entire world, that he could be the closer he’s always aspired to be.

Spieth joked that he would have gladly traded his lively day for a more mundane, 17 pars and a birdie 69, but then that wouldn’t have had the same significance. Spieth needed this victory, warts and all.

Always an active mind, the doubts arrived early on Sunday for Spieth. He’d just blown a three-stroke lead before the turn and the internal dialogue was hard and harsh.

“I thought before the round, I thought I have a reputation as being able to close, but I was hesitant in saying ‘majors,’ to myself,” Spieth conceded. “During the round today I definitely thought any kind of fear or advantage that you can have in this moment over other individuals, not just Matt Kuchar today, but other people that are watching - that's being taken away by the way that I'm playing right now.”

Spieth, who turns 24 in four days, now has the chance to become the youngest player to complete the career Grand Slam at next month’s PGA Championship, the kind of lofty accomplishment that’s not lost on one of the game’s most astute students. But on Sunday as the rain pelted Royal Birkdale and his gaze drifted toward the claret jug, that wasn’t the history he was interested in.

He’d said on numerous occasions that he’d moved on since that ’16 collapse at Augusta National, but players say a lot of things. It’s a competitive firewall to keep talents like Spieth from venturing too far down the rabbit hole.

With apologies to the sports psychologists of the world, there’s no room in golf for self-examination when your next round could just as easily be a breakthrough or breakdown, depending on the outcome.

But then Spieth isn’t your normal champion and as things started to unravel early on Day 4 the déjà vu must have been deafening.

“He’s heard a lot since that ’16 Masters and I’m sure somewhere in there some doubts crept in, but he just said I know how to do this,” Greller said.

Most players wouldn’t admit to such doubts, but then Spieth isn’t most players. On Sunday, he conceded he was uncomfortable to start the round and only slightly less uncomfortable after scrambling for bogey at the 13th hole. More so than the elements or a demanding links, it was those emotions and how he dealt with them that was so rewarding. It may have been Kuchar who he beat by three strokes, but it was the scorecard against an assortment of doubts and demons that will resonate long after he leaves England.

“Closing today was extremely important for the way I look at myself,” Spieth said.

On a wild day along the Irish Sea, Spieth proved to everyone, including himself, that he’s a fighter, a closer, a champion.