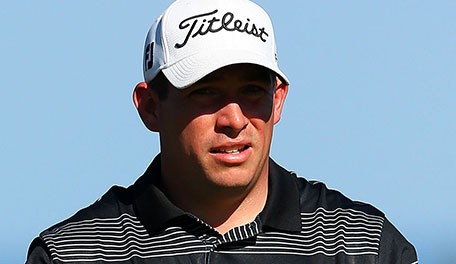 On the same day the World Anti-Doping Agency announced it would begin to use “nighttime raids” to catch doping violators at the Tour de France, the Tour de PGA announced Scott Stallings was the third player suspended under the circuit’s anti-doping program.

That’s raids of racers’ compounds – at night – and Stallings, a 30-year-old father and husband who is guilty of nothing more than a simple lack of due diligence.

But the real guilt here rests with the Tour and an anti-doping policy that even seven years down the line seems to be a round peg in the square hole of professional golf.

The new face of performance-enhancing drug use for the Tour is a three-time winner who, at the urging of his doctor, walked out of a health food store with an $11 bottle of DHEA in an attempt to overcome the fatigue that had made life so difficult.

Stallings took DHEA, a precursor to testosterone production and a substance that is banned by the Tour’s anti-doping program, for about two months. He even took a Tour-administered drug test at the Humana Challenge in January while using the supplement, a test which came back negative to any violations.

And then Stallings, after realizing he may have taken a banned substance, took his story to the Tour, turning himself in on Feb. 10 to a stunned official.

“I think they’ve all waited for that moment, but it was a shock that it actually happened. It caught everyone by surprise. Especially when it came from me,” he told GolfChannel.com on Wednesday.

One of the more popular players on Tour, Stallings was arguably the last guy one would have expected to run afoul of the anti-doping program and earn himself a 90-day suspension.

“Anybody that knows Scott knows he’s not doing it to get an advantage,” Scott Brown, the 2013 Puerto Rico Open winner, said.

To many the punishment didn’t fit the crime.

"He was, in my opinion, trying to help his overall health, doing something that every other citizen in the country has the right to do, and it was taken away from him because he plays golf for a living and I don’t necessarily agree with that," Phil Mickelson said Wednesday at the Scottish Open.

“I think a month would have been totally fine,” Brown added. “If you’re doing it to gain an advantage three months is fine, but he was just trying to be healthy.”

But then the benchmark of fairness has never been a part of the Tour’s anti-doping program, which is modeled after the one used by WADA and the U.S. Anti-Doping Agency.

In 2009, Doug Barron was suspended for one year after testing positive for supplemental testosterone and a beta-blocker, both of which were prescribed by a doctor and he was later granted therapeutic-use exemptions to use.

Stallings’ case, however, more closely resembles that of Vijay Singh’s dustup with anti-doping in 2013. Both players admitted to using a banned substance (the Fijian told Sports Illustrated); both took substances that many argue have no performance benefit if taken orally; and neither failed a drug test.

While Singh was absolved of any sanctions when WADA refined its ruling on the use of IGF-1, the banned substance he admitted to taking, Stallings will miss the rest of the season and was forced to address an extremely personal issue in a very public way.

The Tour had a chance to deviate from the anti-doping world dogma with a player who was clearly not trying to gain a competitive advantage, but instead clung to a notion that drives PED use in other sports – if you’re not cheating you’re not trying.

It’s not as though the circuit hasn’t colored outside the lines when it comes to parts of the anti-doping policy. When the Tour introduced testing in 2008 it didn’t fully follow the WADA list of banned substances or the hallmark transparency that defines the global effort to end doping.

Instead, the Tour announces violations involving performance-enhancing drugs, however innocent they may be, yet remains mum when it comes to failed tests involving recreational drug use.

“What I don’t understand is if you are going to announce names for PED violations why not for recreational offenses?” asked Zach Johnson, a member of the Tour’s policy board when the circuit enacted its anti-doping program. “I’ve never asked.”

Stallings said his decision to turn himself in was no different than if his golf ball moved in the rough. While there was no competitive gain and no one around to witness the infraction, that’s not the way golf works.

“There is a character and honesty element in golf that is different from other sports,” Johnson said. “It’s not better or worse, just different.”

A day removed from the announcement Stallings maintained his path on the high road, taking responsibility for his actions and looking ahead to next season and the health challenges that lay ahead.

He paused for a moment when asked if there was a lesson to be learned from his predicament.

“Do your due diligence,” said Stallings, who plans to have surgery on Friday that he hopes will help him sleep better and alleviate his fatigue. “Don’t take anything for granted. Whether we agree with it or not – it’s not our job to justify it – it’s our job to follow those rules. At the end of the day we’re responsible for our actions.”