Stanley has plenty of support after tough loss 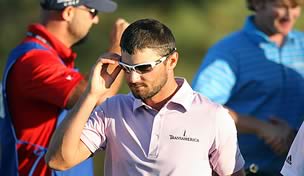 It is the most delicate play in golf, if not all of sport. Kudos and congratulations come easy after a victory, but filling the overwhelming silence that accompanies defeat is an art, more so then science.

In the vortex that follows a letdown the real trick is to find anything to say because the only wrong thing to say is nothing at all. So it is that Mike Taylor found himself poised to thumb a text message into his cell phone Sunday evening but no idea how to fill the field.

What do you say? asked Taylor, Kyle Stanleys swing coach and so much more.

His man had just triple-bogeyed the last hole at Torrey Pines to squander a three-stroke lead and his first PGA Tour title, and now Taylor had to be all at once upbeat and analytical, profound and compassionate in 160 characters or less.

I texted him that I was proud of him and that the big thing was to keep his head up and his chest out and take the positives from the week, said Sea Island (Ga.) Resorts Taylor.

There would be time for critical analysis of Stanleys play later, but on a raw Sunday, Taylor opted for solace and support. Dr. Morris Pickens, Stanleys sports psychologist, took a similar route, texting: I know it hurts, and I feel for you. Well talk more on Monday.

This much is certain, there is no perfect answer. Each player digests disappointment differently, and the only consensus seems to be to give the player time to recover, but never let him forget.

He played well the entire week, Taylor said. The main thing is, as far as your career goes, this is such a small thing. After a week or two, we can talk about actually what happened and what we need to work on.

Pickens plans to have dinner with Stanley on Wednesday in Scottsdale, Ariz. to address Sundays happenings and not just on the now-infamous 72nd hole but during his entire week in San Diego. During one point on Sunday, Stanley led by seven strokes, and from a pure tactical point of view, its difficult to find fault in his game plan on the par 5 closing hole.

The drive, the layup and even the sand wedge approach shot were textbook by almost any measure. The deciding factor, in reality, was an adrenaline-induced additional 100 rpm in spin, an extra 2 mph in club head speed, one more yard of carry ' the razors edge.

Not that Pickens or Taylor have much interest in the mechanics of Stanleys miscue. At least not right now. The message now isnt what happened, its whats next?

Which brings Stanley to TPC Scottsdale and this weeks Waste Management Phoenix Open, a scheduled stop he never considered skipping which has delivered an avalanche of support from every corner of the clubhouse.

One of the few people who wouldnt struggle for something to say was among the first to reach out to Stanley. Robert Garrigus, who suffered a similar final-hole implosion at the 2010 St. Jude Classic, offered Stanley plenty of unsolicited advice via Twitter on Sunday.

If anyone knows how Kyle Stanley feels its me, and he will win more than one tourney before his time is up. He just needs to keep grinding. Sorry bud, tweeted Garrigus, who rebounded from his Memphis meltdown by winning the season-ending event at Disney in 2010.

Brandt Snedeker, who clipped Stanley on the second extra hole at Torrey Pines, could also offer advice from a similar perspective. At the 2009 BMW Championship, Snedeker, widely considered one of the circuits best putters, four-putted from 13 feet on the last hole. The triple-bogey 7 cost him a spot at the Tour Championship and starts at the 2010 Masters and British Open.

Snedekers manager with Crown Sports was waiting for his man when he walked off the 18th green at Cog Hill three years ago. I told him I was sorry, and he told me he didnt want to hear it, Jimmy Johnston laughed. Its the way he is, the way he handles things. Everybody is different in a situation like that.

Hallmark has no card to ease the pain of a four-putt or the shock of an ill-timed triple bogey. On Sunday, there were no magic pep talks to soothe a battered psyche, no clich that would somehow mitigate a meltdown.

There is no use in trying to forget what happened. The only tonic is time and maybe a little forgiveness and a dollop of forward thinking.

Its not rah rah, you will recover, Pickens figured on Wednesday. The message is, What will you learn from this?