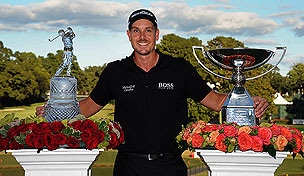 Getty Images
DAYTONA BEACH, FL - DECEMBER 02: Caroline Masson of Germany plays a shot during the final round of the LPGA Qualifying School at LPGA International on December 2, 2012 in Daytona Beach, Florida. (Photo by Sam Greenwood/Getty Images)  -

ATLANTA – In retrospect, it was a quintessential playoff push by any measure.

For all the hand-wringing over the volatility of the current FedEx Cup playoff system, few could argue with a format that delivered the title late Sunday to Henrik Stenson, ostensibly the most consistent player in the game.

It would be easy to dub the Swede this year’s Mr. September, with his victory at the Deutsche Bank Championship a fortnight ago followed by his walk-off 68 at East Lake, but that would be a disservice to his entire body of work.

On his way to the Tour Championship title and the FedEx Cup, Stenson has finished outside the top three in just two of his last eight global starts and has rocketed to No. 4 in the world ranking.

If the only thing harder than FedEx Cup math is Atlanta traffic, Stenson delivered a dollop of clarity that defied projections and algorithms. He started the week inside the top five in points – assuring a victory in the tournament proper would also net the cup – took the lead with an opening-round 64 and never let up.

Through a wrist injury, a broken 4-wood and Saturday’s showers, the Iceman was perfectly relentless in his quest to complete his journey from a competitive abyss that saw him swoon to 230th in the world less than 24 months ago.

“I kind of knew, well, even if I don't win today, I could still win the FedEx Cup,” said Stenson, who is also first on the European Tour’s Race for Dubai list and could become the first player to complete the transatlantic double. “That was the hard bit to put everything aside, as always, and focus on the right things. I didn't play my best round today, but I was hanging in there, took the right decisions.”

From the outset, it was super Sunday FedEx Cup style, with the 30-man mad dash to $11.4 million in cash and deferred prizes quickly turning into an intimate three-ball as the supporting cast fell away.

Rookie sensation Jordan Spieth added to his legacy, birdieing four consecutive holes starting at the 13th on Sunday to briefly cut a lead that had climbed to as many as nine strokes on Saturday to a single digit.

But Stenson never seemed fazed, per his modus operandi.

When asked his man’s state of mind coming down the stretch, Stenson’s caddie Gareth Bryn Lord mimicked a flat line with his hands.

Not bad for a player who less than a week ago dismantled his driver in anger at the BMW Championship and worked over one of Conway Farms’ lockers before departing for the finale.

So when Stenson airmailed the green at No. 14 and made bogey, the first vestiges of intrigue crept into the proceedings and were just as quickly washed away when the champion made a bounce-back birdie at the par-5 15th and arrived at the 17th tee a field goal clear of the pack.

When Stenson pushed his drive into a fairway bunker at the penultimate hole, Spieth – watching the action after signing for his 64 – sat up and took notice. The 8-iron approach shot, however, never left the flag and rolled out to 18 feet for a stress-free par.

Officially, Stenson still had a few more shots to play, tee ball into the right bunker at the 18th, a blast to 4 feet, a putt that never left the cup, but give the 20-year-old credit for recognizing the significance of a clutch performance.

Stenson’s 13-under total left him three clear of Spieth and the game’s most prolific part-time player since Bobby Jones – Steve Stricker, who was the last man standing who could have challenged Stenson for both trophies but could only manage pars over his final three holes.

Stricker, who traded a week chasing elk in Colorado with his buddies for four days chasing a Swede for a bundle, settled for a closing 65 and his seventh top-10 finish in an abbreviated season despite missing half as many putts from 4 to 5 feet (four) in four days as he had all season (eight).

Seems both Stricker and his putting protégé Tiger Woods will need to tighten things up on the greens before next week’s Presidents Cup. The world No. 1 shot himself out of the FedEx Cup equation with opening rounds of 73-71 and seemed to wrap up his state of mind on Friday.

“I’m tired. It’s been a long, long grind,” he said then, a day removed from just his seventh round on Tour without a birdie.

Woods tied for 22nd following a closing 67, but likely wrapped up the consolation prize of winning his 11th Player of the Year award when primary challengers Phil Mickelson and Adam Scott failed to give voters something to think about at the finale.

Scott, derailed by illness on Saturday that may go down as the most expensive 24-hour bug in the history of golf, tied for 14th after playing his final 36 holes in 6 under; while Mickelson showed flashes of solid play but started the weekend too far back and tied for 12th. When asked about the Player of the Year vote, Lefty had no easy answer.

“That's a tough one. If I could have done well this week, I thought I had a really good chance. But as it stands now, I'm not sure,” said Mickelson, the only player to finish in the top 15 in the final FedEx Cup standings every year.

It was small consolation, however, considering Stenson’s command performance. On perhaps the best course in the Tour lineup to play defense, Stenson did his best Nick Faldo impersonation. It was a hearts-and-minds deal – give them nothing to think about and their hearts wouldn’t be in it.

“He wanted to win the tournament, not just the FedEx Cup,” Lord said. “The last 15, 20 minutes he was brilliant.”

The last two months haven’t been too shabby, either.