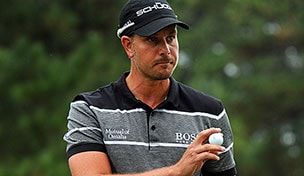 ATLANTA – It wasn’t supposed to be this way.

Not since Vijay Singh rolled into Atlanta in 2008 needing only to remain upright for 72 holes to claim the FedEx Cup loot has the Tour Championship been this anticlimactic. The 2013 season is not over, thanks to Henrik Stenson’s watery missteps on the closing nine as a storm settled in over East Lake, but the producers are starting to cue the closing credits.

It’s a tough pull for this year’s finale, which, for the first time in the playoff era, was going to be a true and proper finale. No fall events to muddy the waters, no money list asterisks to work through like in 2011 when Luke Donald had to go to overtime at Disney to claim the title. This one was supposed to have a bow on it.

Instead, we have Stenson, who will enter the year’s final turn four clear, and he's closing in on the $11.4 million FedEx Cup payday.

Instead, we have Tiger Woods, who broke par for the first time all week with his third-round 69, who is likely one tee time away from his 11th Player of the Year Award and the Vardon Trophy (for low scoring average).

Instead, we have what is shaping up to be a sleepy Sunday.

This is not an indictment of the FedEx Cup format, Stenson, Woods or any of the other top players assembled this week – just the capricious nature of sports.It could have been worse. Stenson could have not blinked on the back nine on Saturday. Through 45 holes the Swede was 14 under and nine strokes ahead of Dustin Johnson, but he bogeyed the 10th, 14th, 16th and 18th holes to at least make it a ball game.

“The rain came, and I started hitting a couple of loose ones on the back nine. It was just hard. It was just a grind to get finished,” said Stenson, who had just two bogeys through his first 45 holes.

Johnson made things interesting with birdies at two of his last four holes, but after starting the week 30th in FedEx Cup points he needs a win, a collection of monumental collapses by some of the game’s top players and a presidential pardon to clip Stenson for the cup.

In fact, it may turn out to be another Johnson that makes things interesting on Sunday. Zach Johnson, No. 4 in points, is the only player among the top 5 in points within nine strokes of Stenson. At 4 under, however, even he would need plenty of help combined with near-perfect play to unseat the front-runner in the season-long race.

Still, to pinch a line from the cult classic “Dumb & Dumber,” so you’re telling me there’s a chance.

That wasn’t the case for much of the day as the field raced the approaching storm and watched Stenson turn the Tour Championship into a two-flight competition.

“Henrik, obviously, is playing great,” said Streve Stricker, whose 68 left him alone in third place at 5 under par. “If he wasn’t here we’d have a great tournament lined up.”

Not bad for a guy who shattered his driver and a defenseless locker on Monday at the BMW Championship, hadn’t played the back nine until Thursday’s opening round and signed for a 66 on Friday with just 13 clubs in the bag after he broke his 4-wood warming up.

“Very impressive. Maybe we all should have broken our driver last week,” said Zach Johnson, who is tied for fourth place after a 69 on Saturday.

It’s not over. They tend to play all 72 at these events, but on a golf course that eschews low numbers against arguably the hottest player in the game it will be, by definition, an uphill climb.

“This is a great golf course to protect on because there's really not that much danger,” Woods said. “You can make a bunch of pars. It's one of those golf courses where (Jason Dufner) and I were talking about it yesterday. It's so easy to shoot 68 to 72.”

Tied for 26th at 3 over, the world No. 1 played his way out of the FedEx Cup race with opening rounds of 73-71, but he can take some solace in the notion that Adam Scott (T-10) and Phil Mickelson (T-10) likely played their way out of the Player of the Year Award.

Many Tour types figured Mickelson and Scott needed to win the FedEx Cup to clip Woods, a five-time winner in 2013, in POY voting. That doesn’t seem likely.Which leaves Dustin and Zach vying for low Johnson honors and chasing Stenson in Sunday’s title bout.

FedEx Cup math being what it is there is still time for the finale to deliver on that promise of a big finish. Stenson could falter, another could charge and the algorithms could still surprise.

Stenson knows it, he just doesn’t know how he would react if he were to lose the Tour Championship and still win the FedEx Cup, a scenario that has happened just twice in the playoff era.

“Of course I want to win two (trophies). If I can't win two, I'll be very pleased to win one,” he figured. “If I'm winning nothing, it will probably be not so sweet from this position. But I didn't have anything when I came here, so we'll see what we'll leave with.”

At an event suddenly void of excitement, we’ll take it.