Stroker Ace: McIlroy in the grip of cross-handed putting 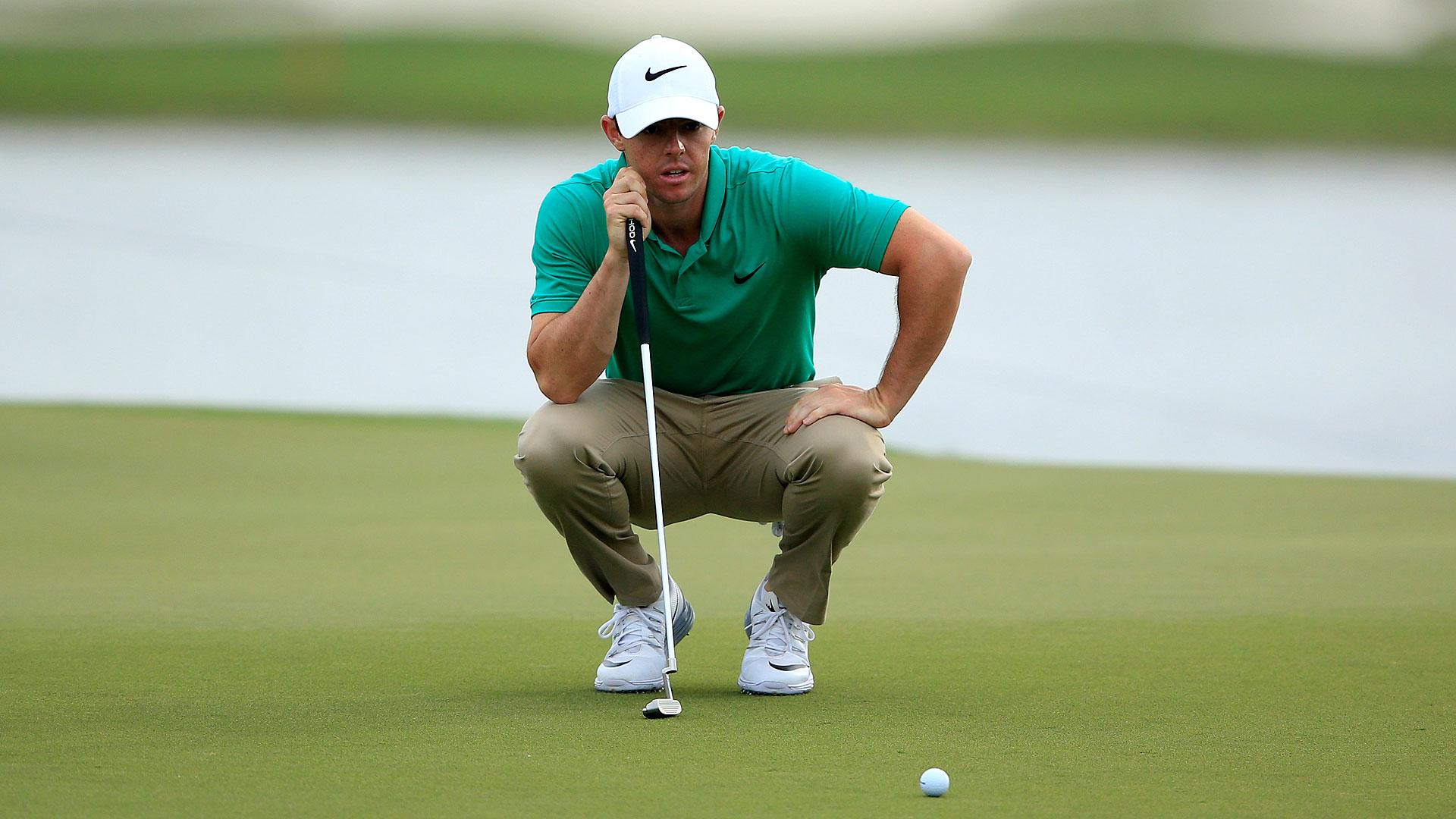 DORAL, Fla. – Rory McIlroy was worried about the perception he was copying Jordan Spieth.

Turns out, that’s not a bad thing.

For the last two days your front-runner at Doral has needed just 50 putts on his way to a three-stroke lead. He ranks 11th in strokes gained-putting, has converted 49 of 55 attempts from 10 feet and has generally breezed his way around to a 4-under 68 on a windswept and demanding golf course.

“I've seen Rory play some great golf. I think he's going to be very satisfied with that round,” said Adam Scott, who was paired with McIlroy on Saturday. “It looked like he was under total control. He scrambled when he had to. He executed a lot of great shots. He drove the ball great.”

Unmentioned in Scott’s assessment was McIlroy’s putting this week, which fell under a particularly intrusive microscope when he revealed via social media that he’d switched to a cross-handed putting grip.

McIlroy’s putting has always been the lone blind spot in an otherwise flawless game. It’s not as though the Northern Irishman has ever been a bad putter, as if that’s possible for someone who ascends to No. 1 in the world and collects multiple majors, but by contrast to the rest of his game there has always been room for improvement.

It’s interesting that it wasn’t a fear of the unknown or the predictable awkward moments that come with a new putting stroke that gave McIlroy pause to switch.

It was, in fact, the perceived notion that he was following Spieth’s example to the cross-handed crossroads.

“I've been playing it around in my head a little bit about making the switch, and the one thing that I was sort of worried about was the McIlroy-copying-Spieth,” McIlroy said on Friday. “That was my big thing.”

You can call Rory a copycat, figure him a Johnny-come-lately, chide him for being late to the dance; but on Saturday there was only one title that mattered to the world No. 3 – 54-hole leader.

This is, after all, a guy who has converted 6-of-8 outright 54-hole leads in his Tour career and is keen to rejoin the conversation after an ankle injury sidelined him last season.

Yes, yes, McIlroy is impressive with his driver – like on the 18th hole on Saturday when he obliterated his tee shot 324 yards, some 20 yards deep of Scott, into a hurting wind.

But it’s been his putting and that cross-handed grip that has made the difference at Doral.

For the first time this year McIlroy pieced together a bogey-free round on Saturday thanks, in large part, to key par saves at No. 12 from 8 feet and the 18th hole from 6 feet.

“Just look at some of the saves I had out there today and some of the big par putts; those were the things that were missing over the past three or four tournaments,” McIlroy said. “To be able to correct that and go out and play in a final group on a Saturday in a golf tournament like this on a golf course like this, and play bogey-free, it gives me a lot of confidence going forward.”

There will be a rush to judgment that McIlroy’s cross-handed experiment is an instant success, that he’s effortlessly made a transition it takes others years to manage.

But as is the case with every aspect of a top player’s game, the road to renewal has been well-traveled for McIlroy.

McIlroy explained that after missing the cut at last week’s Honda Classic he spent four days, two hours a day honing a stroke that wasn’t exactly foreign to him.

“So I've put the work in and I've kept putting the work in,” said McIlroy, who putted cross-handed briefly when he first turned pro in 2008. “I've found a really nice routine that I go through before every round now, and you see me sort of holing putts from all around the hole from 3 feet, 6 feet, 9 feet, and that gives me a nice feel before going out there.”

Maybe the most impressive part of McIlroy’s transition to cross-handed is that it was a self-made move. Like all aspects of his game, he wanted to “own” his new stroke and only after hours of practice did he send a video to Dave Stockton Sr., who has worked with Rory on his putting in recent years.

According to McIlroy, Stockton liked what he saw, which is no surprise considering that two weeks ago at Riviera the putting guru explained that Rory is at his best when uses his left hand to putt.

“I didn't seek anyone out, but I guess I sent videos to a couple of people for confirmation more than anything else,” McIlroy said. “But it felt really good to me from the start. I think when something does feel that right, you just have to go with it.”

If imitation is the best form of flattery consider McIlroy’s shift to “Spieth’s” putting grip a success for everyone involved, and it didn’t hurt that the two were paired together the first two days at Doral, giving McIlroy a chance to see up close the game’s best putting stroke.

“I stood up on the podium yesterday saying I didn't want that perception of me copying Jordan, but that hasn't really been the case this week,” McIlroy said.

Not to mention that if McIlroy wins on Sunday it would be a much more welcome comparison to Spieth.