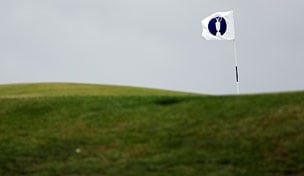 Getty Images
SINGAPORE - MARCH 08: Jiyai Shin of South Korea with the winners trophy the final round of HSBC Women's Champions at the Tanah Merah Country Club on March 8, 2009 in Singapore. (Photo by Ross Kinnaird/Getty Images)  -

SANDWICH, England – Early Tuesday Rickie Fowler glared down Royal St. George’s 14th fairway, bracing against the type of storm that would rate a name and a possible evacuation warning in the United States, before launching his hybrid tee shot high into the cold, swirling air that left him just a 5-iron into the par 5.

It was a perfect metaphor for St. George’s. A day earlier, the young American had gone the driver-3-iron route to the same spot. Welcome to Royal Dust Bowl, site of this week’s Open Championship and the cure to all the equipment woes that some say plague the game.

If the powers that be want to tell how far the play-for-pay set hits the golf ball they should consider a standing game at St. George’s, topped off by a three-month bake job from Mother Nature to golden yellow perfection.

For weeks the southeast coast of England has been mired in drought leaving the seaside layout brown and at its bouncy best and many of the game’s biggest bombers wondering why they paid the extra baggage freight to even fly their drivers to the United Kingdom.

We’ve seen this show before, back in 2006 at Royal Liverpool when Tiger Woods whipped the world’s best bunting a niblick about the place. At Hoylake, Woods hit just a single driver and, more importantly, just one fairway bunker.

'As I was playing the golf course, I would hit a couple of drives, and the driver would go 350, 370 yards. How can you control that out here? You can't control that,” Woods said that hot summer Sunday in ’06. “The fairways are hard enough to hit as it is, and you add driver and they go that far, now how hard is it to hit?”

St. George’s is shaping up to be the sequel, the only question is who figures it out fast enough. For the game’s bombers it’s a difficult, if not impossible, learning curve. Before heading to the United Kingdom Gary Woodland, among the longest of the freakishly long, was giddy to see how far he could hit his 2-iron, but he may not be liking the answer.

Simply put, the modern game of high and long doesn’t play well when the rolling pitch is parched and the wind gale-like. In a scene from bizzaro world, Woodland watched playing partner Justin Leonard outdrive him on Tuesday at the par-4 fourth hole . . . Justin Leonard.

“Take the par 3s out and I would say 10 of the 14 tee shots most guys will be playing from the same area. I don’t think there are too many holes where you can take on a bit more. The bunkers are such that you have to play to certain areas off the tee.”

Call it extreme target golf, or maybe the great equalizer. Either way it is an anomaly of the grand slam game that at least partially explains some of St. George’s quirky champions.

Ben Curtis’ out-of-nowhere victory in 2003 is the most-often cited example of St. George’s unique challenges. In ’03 Curtis hit just 32 of 56 fairways, a pedestrian performance by any measure, yet finished 11th in the field in driving accuracy. It’s also worth noting that Curtis ranked 119th in driving distance on the PGA Tour that year.

Conversely, Woods was 48 for 56 in hitting fairways in 2006 at Royal Liverpool, the last time the Open was played on a brown patch and considered by some to be his greatest major triumph, along with the 2000 U.S. Open, from a tactical standpoint.

The oddsmakers may like the high-ball, long-hitting likes of Rory McIlroy or Dustin Johnson this week, but the odds are against them unless they drastically change the way they play the game.

“With this wind you’re going to have to keep the ball low,” McIlroy said. “But sometimes it’s hard to run the ball into these greens because they’re so undulating and they can go so many different ways. You’re going to really need a very strong ball flight.”

Note to ShotLink: any chance you eggheads can work up a “strong ball flight” statistic for this week?

Strangely, it won’t be Fairways Hit – a relatively meaningless stat at St. George’s where good drives often end up in bad places – so much as bunkers avoided that will add up to red numbers, or more likely something in the low black figures if the wind presists.

“You throw the yardage book out, you throw straight technique out, it’s about shaping shots,” said Peter Kostis, an analyst for CBS Sports and swing coach for Paul Casey. “Everyone is playing to the same spot, unless you’re very stupid. You can’t control the bounces, but you can control the percentages.”

It is a Thinking Man’s Open, not the steady diet of smash-and-grab outings that often dot the grand slam calendar, and the winner will probably surprise you. They always do.