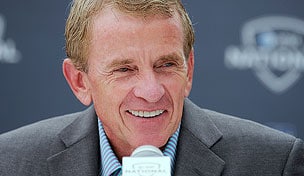 NEWTOWN SQUARE, Pa. – On this the Official World Golf Ranking is not the culprit, just the crystal-clear catalyst. You may not be a fan of the OWGR math, but there’s no denying that Rory McIlroy is the globe’s third-best at the moment.

Ditto for Lee Westwood (No. 2), Martin Kaymer (fourth) and, yes, even Luke Donald, who has held down the top spot for five weeks now. All total, five of the top 10 in the world order are from Europe. Even more telling, three of the top 4 are not PGA Tour members.

Many experts of all nationalities agree this is part of a cycle, a natural order expedited by Tiger Woods’ freefall and Phil Mickelson’s curious funk. To a Tour official, however, it’s difficult to see anything other than a disturbing trend, particularly when one considers that the circuit will begin a new round of television negotiations later this year and is currently meeting with FedEx to continue sponsoring the circuit’s season-long playoff run.

McIlroy, as a former frat brother who let his membership lapse last year, is limited to 10 Tour starts this season, has played seven and will likely only play two more the rest of the way (WGC-Bridgestone Invitational and PGA Championship). Expect the same totals for Westwood and Kaymer, also non-members who currently have seven starts in the books.

In April McIlroy’s manager Chubby Chandler said, “If he could play 12 or 13 (instead of the Tour minimum 15 events) he’d be all right.”

And why shouldn’t the world’s third-ranked player and most-recent major winner be allowed to “cherry pick” his schedule? The European Tour has loopholes in its regulations to make room for the world’s best and brightest and if one has ascended to the top of the global heap it’s impossible to argue that they aren’t deserving.

One proposal that has been floated in recent weeks is to simply exempt anyone ranked inside the top 10 into whatever event they wishes to play, regardless of regulations or tour affiliation.

Perhaps not, and the commish certainly must traverse the fine line between delivering the best possible fields and protecting those players who support the circuit full time.

“You’ve got to protect your members and protect your brand. There’s a reason why the Tour is the best tour in the world,” Joe Ogilvie said. “You can’t make a decision based on a six-month cycle. I’m of the belief American golf doesn’t have a big problem.”

But if the “cycle” continues and power keeps shifting toward the Continent it’s going to become increasingly difficult to dismiss the holes that currently dot the top of the circuit’s tee sheet.

On Wednesday at Aronimink Golf Club Finchem continued to take the high road on this issue, saying, in short, that what’s good for the Tour may not always be good for the growth of global golf, a position he is increasingly taking ever since golf worked its way back into the Olympic fold.

“If we’re successful in changing rules so that a player, an international player can play four or five more times here that’s great for those weeks here, (but) it means that he’s not going to play three or four times someplace else,” he said.

That Finchem would make such a distinction at this week’s AT&T National, an invitational that features a field that looks more like a “classic,” was telling. Since the AT&T began in 2007 the quality of its field, at least when measured by the World Ranking, has steadily declined.

Although Finchem stressed that the Tour does not use the World Ranking to measure the quality of its fields, it’s impossible to ignore the high-profile absentees.

Whether a change in the exemption rules for international players would help AT&T National, centrally located two weeks before and after the U.S. and British opens, respectively, is doubtful. What isn’t up for debate is how beneficial another two or three starts for McIlroy in the United States could be at a crucial time for the Tour.

Finchem said it’s not likely such a rules adjustment would be made before next season, and by that time perhaps the “cycle” has swung back in America’s favor, but given the current landscape we wouldn’t bet that sprawling clubhouse at TPC Sawgrass on it.

Maybe Greg Norman was right and a “world tour” is a Darwin-like inevitability. And maybe it’s time the Tour opens up the shop, however slightly, to make room for that inevitability.